OK I finally used my new serger for something other than teeny little samples. I took a mock-neck long-sleeved t-shirt that I had scrunch-dyed (greens and browns — I could hide in the shrubbery) and that definitely no longer fit me (if it ever did) and remade it into a very much nicer and more fitted t-shirt. I took a newish t-shirt in the modern “girly” shape that I have and used it for a pattern. I cut off the sleeves on the old t-shirt, redrew the armscye and the side seams, and re-set the sleeve and stitched up the sides. And bob’s-your-uncle! I’ve finally got something that doesn’t look like a reject from the Sally Ann. It only took about an hour and part of that was rethreading the machine and testing the stitching on scraps to get the settings right. The neat thing was I made use of the differential feed and the 4-thread overedge stitch, neither of which my old serger has. This made me feel that the new one is truly justified. From this experiment I can make a paper pattern and use it to fix more of my oldie-but-goodie t-shirts. Cool. I love recycling.

Today I’d like to chat about one of the books I recently purchased: 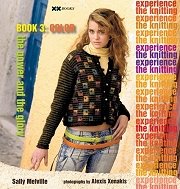 Book 3: Color by Sally Melville, subtitled The Power and The Glory (love that!) and the third in a series of instructional books The Knitting Experience. I don’t own the first two: The Knit Stitch and The Purl Stitch mostly because I thought they were too beginner level for me. Even though I love the big asymmetrical garter stitch sweater on the cover of The Knit Stitch, I resisted! There weren’t enough other things in the books to catch my interest. However, I got snagged by this one and found even more than I bargained for while reading the book. Sally’s designs are quite nice, though some are starting to look a bit dated due to the lack of a close fit that’s now more in style. (Note my efforts to fit my t-shirts more closely above!) But the skills sections are very clear and I learned a lot about why my stranded knitting wasn’t looking as good as I’d like. Sally discusses it all for both left and right-hand throwers and using both hands and even alternatives like having one colour around your neck. Velly intellesting! There’s a section on variegated yarns and using the different types of variegations. I also liked the sections called Meditations, particularly the ones on learning and time. Lastly, the photo essay in the back on the crew’s filming trip to Greece was kind of fun. These aren’t things you’d normally find in a knitting pattern book, are they? Don’t know if I’ll make anything out of this book, but I’m still pondering what I’ve learned from it.

What else? Oh yeah, I got a call today to say our greenhouse we ordered arrived in the store. T-Man’s gone to get it in the van as I type. This is a substitute for the tomato house that has seen better days. The uprights are starting to rot and the plastic needs to be replaced. Though we may just put it up too and use it to keep the excess peppers and eggplants covered and warmer than they would be out in the regular garden. Depends on how much fits into the greenhouse first. We have been looking for one that doesn’t include glass for a couple of years now. We have this problem with the huge old pear tree next door that drops pears from 50 feet up like bombs. Anything glass (or your head) is going to get damaged during the dangerous season. And we won’t even discuss the wasps that get drunk on the rotting pears. I keep my epi-pen handy but I still don’t relish another trip to the ER. As I mentioned in a post last year, tomatoes must be under cover here if you want to get any before the late blight gets them first. Whole plants rot into black goo almost overnight. Not a pretty sight. You have to keep your plants dry, except for their roots of course. The blight splashes up from the soil onto the plant leaves and even landscape fabric doesn’t help much to prevent it. Only covering them over well with a roof seems to keep the disease at bay, though some people have had success in pots with sterilized potting mix. That might be ok for a couple of plants but I usually grow at least a dozen or more. Yep, me loves me my tomatoes — especially the little oval ones called “Juliet”. Cherry tomatoes shaped like miniature paste tomatoes with some of those traits including more flesh and less juice. Yum. Can’t wait until summer! Meanwhile the plants are getting too big for the space under the lights in the basement. They’ll be going into the greenhouse as soon as it’s ready.