I was hoping to show off my Lace Leaf Socks today, but I’m not quite done yet. My hands are a bit sore, maybe from the change of the weather to cooler and damper. We’ll just have to wait on them a bit longer because I’ve learned the hard way not to push it when the old bod’ says no. I do have my friend Kirsten’s Stupid Sock Creature that she made from John Murphy’s book to show off. She is so ugly-cute! Her name is Swami Lillananda and she’s got her yoga mat ready to practice the latest yoga asana and her fuzzy sweater so she doesn’t get chilled after exercising. She is so West Coast! The only thing she’s missing is the Starbucks double latte with chocolate sprinkles but Kirsten doesn’t drink Starbucks and chocolate gives her migraines. I don’t know about the Swami though — maybe she’s a coffee addict like most people around here (except me) and she’s already finished her coffee-to-go and placed the cup carefully in the recycling box. I love her and hope to get around to making a sock creature of my own one of these days. It’s on The List. 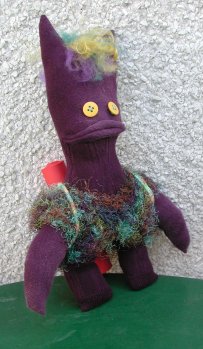 You know about The List doncha? That’s the endless tally of finished projects, ones already in the pipeline, things I want to make sometime, and all the items that I hope to make but probably won’t ever get around to. Doesn’t everybody have one? Or many? We check a few things off and add lots more so it just keeps getting longer. I have 2 fat binders to keep mine in.

The weather is a very mixed bag today. The sun is trying to peek through while it’s raining and it’s actually quite warm. I picked these yummy greens from my garden this morning. It’s already giving me a nice harvest! I only take the outside leaves and let the middle continue to grow so I always have more coming but I don’t have to keep replanting. It works well until it gets too warm and things start to bolt. Then I replant and sometimes the more mature greens from the next planting can make it well into winter — or even into the next spring depending on how mild the winter is. This year I can put some in the greenhouse and we’ll see how well they do. It’s all a new experiment. Anyway, there’s few veggies I don’t need to buy at the store now and more to come as my garden matures. I have two kinds of lettuce (Merlot and Esmeralda) that do really well and have great colour. There’s arugula, mizuna (that’s the one with all the pointy bits), endive, and Ta Tsai (a little Chinese green with spoon-shaped leaves). There’s also a few little raab sprouts which I prefer uncooked or they taste more turnip-y. I didn’t photograph the asparagus but I’ve picked quite a lot from our little patch. It’s almost done for the year though. Some of the stalks have escaped and are almost as tall as I am already! 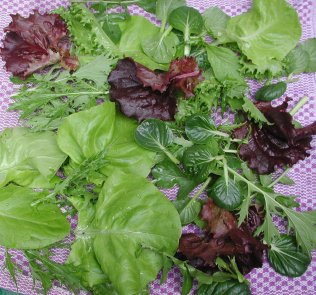 I was a bit naughty today and broke down and ordered a number of books from Chapters/Indigo online that I couldn’t find in the stores. The crafts section has been getting smaller and smaller in all of the 3 different Chapters bookstores that I frequent. They have all the learn-to-knit and quilting books one could want but they’re not what I’m looking for. The other big temptation to order online is the big savings. Including the iRewards you can save almost $10 on some books. And if you order $39 or more you get free shipping. The only downside is waiting a bit instead of having the immediate gratification of a book in your hands. But when the box(es) do come it’s better than Christmas! I’d feel a wee bit guilty about not supporting local businesses but I buys ’em where I finds ’em. Besides I really do spread my book and magazine money around quite a bit. Yes, I’m a bibliophile but I don’t want a cure, thanks.

Speaking of mail order, I just got a box of Aurelia fibres delivered. Yums!!! I have enough Tamarillo now to spin up for a project (which I’ll tell you about when I’ve gotten further on it) and a bag of one of Andrea’s new colour combos, Fernwood. It’s “a warm, casual mix of moss, khaki, nutmeg & walnut” as she describes it, though there’s more colours in it than that and it’s a lot more subtle than it looks in the photo on the website. At least on my screen. These colourways always spin up differently than they look too and even different spinners can make it look unique. I think that’s part of the fun of this lovely dyed combed top. Off to do something else besides play on the computer. The sun is coming out!