This post is much later than I actually wrote it because Blogger was down. I feel for the poor techs frantically working to restore things to their natural order before all the frustrated people throw a million hissy-fits. It’s a tough job. You never get the credit when things run properly but have it go down for a minute and the world starts throwing rocks and broken glass at you. Magic wands don’t help either. Thanks guys! And/or gals.

After another visit to my torturer…er, physio yesterday, I have a new tape pattern on my back. This one is a little more uncomfortable but it’s holding my shoulders in a way that makes it harder for me to slouch. That’s a good thing. I have a couple more exercises to add to the ever-expanding list too. I have to play music to entertain myself while I’m doing them. It takes so long I get bored! However, while I’m singing along I forget to count reps. Oh well. Things are improving and I have one more visit on Friday. Maybe the last one for awhile — it all depends.

To make up for the lack of pictures in my last few posts, I’m ready to show a few things I’ve been working on. First up is Lady O, the beaded art doll I made last fall. I just made her a wire stand so she can stop slouching. It works better than my tape! But I don’t think I would like anybody to shove a wire up my wazoo like I did to poor Lady O! To give you an idea of scale, she stands about 3 1/2 inches to the top of her hair/headdress. Pretty little but it took me hours and hours to bead her. This was my first completely beaded doll and I did a lot of it while sitting either in my VW van at the table or at a picnic table in Oregon and Washington state. 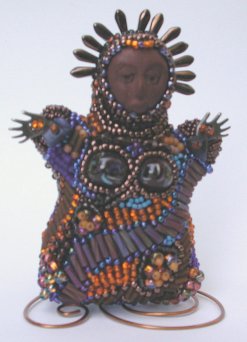 Next up we have the shell top in lichen green Bomwull that I’ve been slowly working on. I so rarely knit a pattern that someone else designed, particularly with machine-made yarn, that it’s always a miracle to me when it actually works out. I couldn’t help myself from changing something though. So far I’ve changed the flat knitting to circular which worked fine, except for joining in new balls of yarn. My joins suck. Badly. I’m used to handspun 2-ply wool which just melds together any way you want. This stuff is plied (one wool and one cotton) and then cabled (results plied together in the opposite direction) and each of the four 2-ply strands wants to un-cable and stick out. This makes for splitty yarn to knit with and my joins have bits that stick out of them on the public side. I ran all of the bits through the back of the knitting on one join, but the second one is still looking bad. More messing with needed and maybe some fray-check on the back. I need to practice more invisible joining methods for commercial yarns. For some reason I don’t have the same problems with sock yarns but maybe that’s because they are so fine compared to this. And fuzzier even though they’re superwash. Anyway, I’ve now split for the front and back and decreased for the armholes so I’m working back and forth instead of around. I made a mistake and split on the wrong row of the lacey pattern in the centre front and back so that I needed to do the tricky bit on the wrong side row. Rather than frog back and knit one more row, I got out my trusty Montse Stanley. (Everyone has a copy of her book, don’t they?) Luckily there is a way to do the double decrease from the purl side. It’s a wee bit fussy but not that bad. There’s only 1 of these on each side of the sweater so it’s not a biggie. The two balls of yarn in the picture are all that I have left so they’d better be enough to finish. Though I’m going to need to split my knitting again for the front neck and shoulders. Note my sloppy tension. I’m hoping a lot of that will disappear in the blocking. As I said, I’m not used to knitting with commercial yarns, except novelties and sock yarns. The former hides any unevenness and the latter is knit on such fine needles that it doesn’t show. This is a big experiment for me! I’m gaining new respect for “regular” knitters who buy the yarn and knit the pattern as is. It’s harder than I thought. 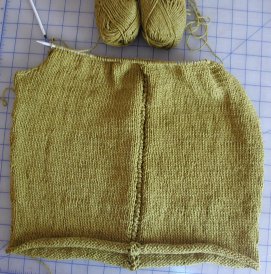 Then there’s the spinning that I’ve been doing for the Little Squares sweater from Sally Melville’s Book 3: Color. I’m still not sure where I’m going with this pattern since as I’ve mentioned I’m loving my swatch but I’m not getting anywhere near gauge. It’s not stopping me from spinning up more yarn to carry on with however. This will become Something eventually. I don’t think I needed a whole 500g of Tamarillo sliver but it’s nice to have spare just in case. Hopefully I have enough of the ribbon yarn, but I’m pretty sure I can get more if I need to. As long as I don’t take too long to find out whether or not I need it! It’s Incredible by Lion Brand and pretty ubiquitous. The dyelots don’t seem to matter much either since it’s a variegated colourway. 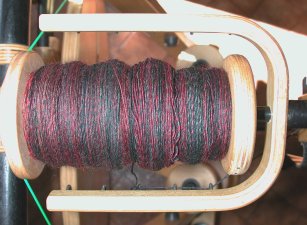 Further progress on other projects: T-Man’s boring gray socks are past the heel turn, I’ve frogged the Jaywalkers and will redye the yarn before trying again, and I’ve just cast on for my Pomatomus socks. Oh…and Mu Ni, my Celestial beaded art doll has “hair” and I’ve partly done the back of her dress. She needs the rest of her back and her arms done still. I really enjoyed using “bocche” stitch for the back of her head. It’s really easy to work (pick up 3 beads and go back in one bead width away) and results in a nice texture. It uses lots of beads but is fairly fast to do. Faster than backstitch anyway which is mostly what I’ve used for the rest of her. I’ve got a week before the next progress photo is due. Maybe I can finish her by then and beat the due date of July 1.

The new issue of MagKnits is up! Go see.