It happened at 5:26 am PDT this morning. I was awake long enough to say “Summer!” and went back to sleep for another hour. T-Man was up though getting ready for work. And now it’s even looking more like real summer — the sun is out (though there are high clouds) and the temp is warming up. That’s good because our heat is off and it was only 15 degrees C. in our bedroom this morning. Almost winter temps and a degree colder than we let the rest of the house get at night when the furnace is on! Consequently we still have lots of blankets on the bed though we’ve been throwing the top coverlet off and pulling it back on regularly as the temperature has been going up and down. Yes, as you might expect our blankets are handwoven but not all by me. Though I did all the wool dyeing. I need to make another one or two soon.

We need some fibre content in this post so here’s a close-up of the Pomatomus sock that’s got one repeat of the pattern done. I’m loving the colours though they are pretty darn bright! They’ll spend most of their time inside my boots (outdoors) or my Birkies (indoors) anyway. I’m finding this pattern fun to knit thanks to Cookie’s good design and excellent instructions. 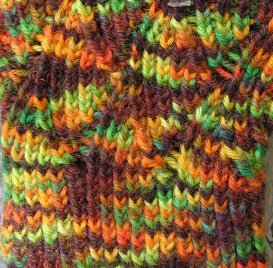 I’m surprised I didn’t have a migraine or some other effect from the lovely toxic stinky stuff we painted onto the stone mosaics last evening. It was pretty bad! Most of the kids wanted to help but their parents decided that it was too hard on their developing brains. Good thinking. Though we don’t care about my brain, do we? I only had 3 other helpers, one of whom was too young and shouldn’t have been helping but she did a great job. (Nobody stopped her!) We did manage to keep the lovely and very pregnant coordinator out of the area though. We got the last of the stones washed down and ready for more lacquer stuff on Thursday. T-Man and I have decided to sit Thursday’s session out. We’ve definitely done our share anyway. More than our share actually. Time for those who are younger and stronger to do their bit. We’re letting the stinky stuff dry until Saturday when we go to pick our up Darth Dragonfly and bring it home. 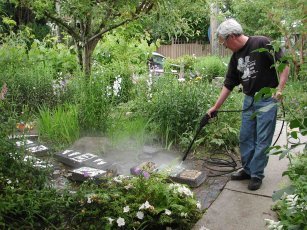 Here's the T-Man washing off the hopscotch pieces in Dawn's front yard. He's trying not to damage the flowers. 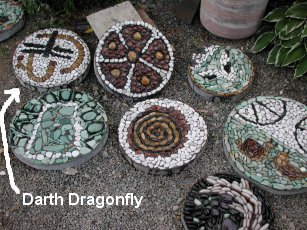 Here's Darth with his coat of lacquer-stuff. Note the Save Our Pool one in front. That's for the outdoor pool nearby where the city wants to tear down the attached community centre and pool because they're building a new community centre (a couple of kilometres away) and nobody needs an outdoor pool that you can only use for a few months a year when there's an indoor one available (a couple of kilometres away in the opposite direction). Hah. My kids swam in that pool every summer. There's a neighbourhood group who are trying to save it but so far all they've got is another year's reprieve. They aren't giving up without a fight though. We also have the flower, the spiral, the fish, the seagull, and the bicycle wheels with the slug and snail watching. There are lots more too. See? Note the bunny and my friend's in the middle with salmon, stream, and mountains. 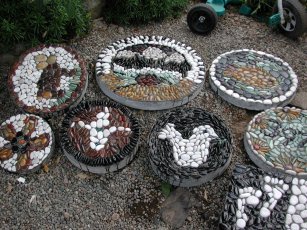 But I won't bore you with them all. I think it's been great fun and I'm really glad that we had Dawn to organise it, Glen to mentor it, and the neighbours to take part in the project.