Er…I mean, where’s Damselfly? I’ve been so busy for the past few days, I haven’t had time to blog. We did have time to eat all those strawberries and I bought some more. This is pig-out time while they are in season. They are so good it makes me wonder why California even bothers growing those cardboard imitations. There’s no comparison, but then I’ve never eaten them ripe and fresh from the California field. When they’re picked before they’re ready and have to travel 1000 miles first, I think they get a little tired and grumpy. I would.

So what have I been up to? On Saturday I went with my Spectrum buddies out to the Surrey Art Gallery to see the Quilt of Belonging. It was unbelievably spectacular especially from the point of view of us textile enthusiasts. Each “square” (really a diamond) representing the countries of the world and a significant number of Canadian First Nations people was a little work of art. This included embroidery, quilting, beadwork, weaving, collage, bobbin lace, knitting, and crochet. Even quill work, moose hair tufting, and pieced seal skins were used. Several of us wisely brought binoculars to see the stitches up close. The top is about 4 metres off the ground and there is a barrier to keep people from coming too close or touching so the binoculars worked great to see the details. Better than in the book even. Oh yes, I did get the book. It tells the story of each individual piece and the whole “quilt” in detail. You don't quite get the immensity of the real thing, but you get the information in order to appreciate it more. If it wasn't an hour's drive, it might be worthwhile going back to see it again after reading the book. The display is only on until June 25th.

After we spent a couple of hours ogling the quilt, we all went over to the park next door and had a picnic lunch. When we got full on cheese, hummus, bread, strawberry and greens salad, pasta salad, olives, and cake, we pulled out the spindles and had a little Spinning In Public session. It was International Knitting In Public Day, but we won’t quibble. And yes, I did knit a bit in the car on the way. Unfortunately, on the way back on public transit I didn’t get a chance to pull out my knitting or spinning. It was pretty crowded and my back pack was so full, I couldn’t get at anything in it!

On the way home, two of us detoured to the home/studio of young member of our weavers’ guild who has just graduated from the textiles program at Capilano College. She had an open house to show off all her two years worth of work and it was pretty impressive! She is especially interested in weaving and bobbin lace and plans to take over teaching lacemaking from Lenka Suchanek, my original instructor. I would have loved to have done that college textile arts program but when it first started it included clay and I’ve been there/done that/have no talent for mud. Plus I was well-acquainted with the instructors at that time and didn’t feel like I would get enough out of it except the certificate. Now the program is more art oriented (in the “showing your work in galleries and selling” sense) which no longer appeals to me. I’ve given up on doing stuff just for recognition and don’t really need a certificate for anything. So I follow my nose — or my muse or whatever you want to call it — instead. More power to Jay though! She already has found work weaving and is planning to continue her graduate studies. She done good.

Sunday was fairly nice, warm with a cooler breeze, so the T-Man and I decided one of our Long Walks was in order. OK we were avoiding the gardening again! We first walked to Canadian Tire where he bought himself a Father’s Day present of a new razor which was desperately needed. (The old one sounds like a wood chipper. A broken wood chipper.) Then we walked across the Cambie Bridge downtown where we treated ourselves to another go at the Tsunami sushi boats. Then we headed for the seawall in order to get back to the bridge but detoured instead to the Aquabus which took us across False Creek to Granville Island. Just up the gangplank, we collapsed on the patio at the Arts Club bar for a beer (him) and cider (me) and watched the tourists and the boats coming and going for awhile to rest our tootsies. Then over to the Market where we picked up some jerk pork chops for the barbeque later. Of course I couldn’t miss Maiwa and found a book I had to have (of course) plus more little packets of their Indian sequins. We also visited the Silk Weaving Studio to see the tiny little silk worms they’re growing in the shop. They are so cute! (Yes, I know they’re caterpillars but they’re adorable and they’re not about to eat my garden.) We'll be sure to go back to see them again when they're bigger. Then we walked home by way of Mayfair News to get my copy of the latest issue of Spin-Off. (It wasn’t in yet at Chapter’s downtown.) Needless to say we were pretty pooped by the time we got home. I must be pretty fit though because I wasn’t stiff or anything the next day and my bad hip has been behaving itself.

Yesterday, I began with a visit to my lovely torturer…er, physio for another session. She thinks I may only need one or two more sessions and then I’ll be as good to go as I ever get. Her exercises are interesting in that they are strengthening different muscle groups than I’ve been doing before. More in the middle of my back between my shoulder blades. Whatever takes the pressure off my neck, I’m happy with.

Then I had a visit from my birth mom and my sister D, who was in town from Haida Gwaii (aka Queen Charlotte Islands). I hadn’t seen her for awhile so it was nice to share some of the projects I’ve been working on. She likes a lot of the same stuff I do and loved the book about the Quilt of Belonging. (She’s going to get a copy or, more accurately our sister is going to get one for her.) When said sister, M, was finished with a meeting we all including T-Man went for dinner at Tomato, a very classy diner that serves organic foods that mom can eat. (She’s on a special diet for her cancer and so far it’s working. We don’t mess with success.) T-Man is pretty brave to go out with 4 related women at the same time, doncha think? He’s pretty laid back though luckily because we were being pretty silly. Dinner was yummy! I had candied salmon and goat cheese salad on a bed of mixed organic greens with maple dressing. And an English cider to drink. I was joking that I could have made the salad at home since my fridge is full of my own organic greens, but it was nice not to cook. My kitchen is in a bit of a state since we’re trying to refinish the sink with epoxy but the grout has to be cleaned and some tiles re-glued first. I’m washing the dishes in the bathroom for the time being. Anyway, D is heading back to Haida Gwaii today so it was lovely to have a wee bit of time with her first. And B-Mom and M too of course. I don't get to see them all that often either.

So here I am today, trying to catch up with my email and blogging. Still not vacuuming but I did catch a dust bunny or two by hand. They’re getting pretty brazen so if my neck feels up to it, I may get out the bunny-sucker (picture the one in Wallace & Gromit’s Curse of the Were Rabbit) and give them a rousting out tomorrow. Before they start attacking our feet as we walk by like B-Mom’s kitten Angel (who is anything but these days).

BTW, I had to post the next progress pictures of my Mu Ni doll for the Beaded Art Doll Yahoogroup so here she is, front and back: 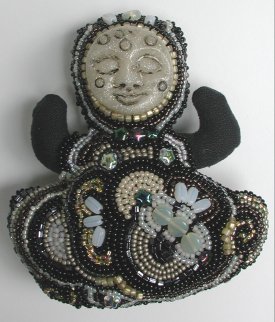 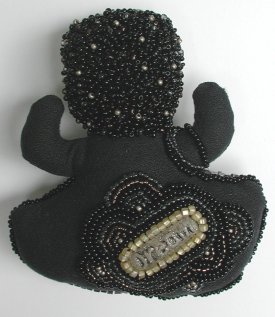 Not quite done yet, but we're getting there. It's hard to work too long when my neck protests mightily when I've overdone it.