How Long Is A Piece Of String?

That’s my stock answer whenever I get the common question “How long did it take you to make that?” Things just take as long as they take. One bead, one stitch, one pick, one inch at a time. My particular habit of working on several projects at once tends to make each of them take even longer than they would if I just concentrated on finishing one at a time. But how fast I finish isn’t the point. Even if I’m really happy with the completed item and celebrate its check off my never-ending list, it’s still the process of working on it that was important to me. I can tell because immediately upon finishing something, I start something else. The list of UFOs and Next-In-Lines (hereafter referred to as NILs) never seems to get any shorter. Sometimes longer, but not shorter. There is no end — except likely either my total incapacitation or my demise. I can’t help myself. I have to be doing something entertaining with my hands.

So today I finished winding the warp for the Bamboo Samples. Now we have to get it on the table loom so I can start weaving. I have to wait for my weaving partner to have the time available to come help me. If I start without her, she’ll think I don’t want her help. Wrong! It’s much more fun to thread the loom with company. This is nice yarn and I’ve never worked with bamboo before. The colours are rust and dark brown (almost black) and the feel of the brown is somehow softer than the rust. Don’t know why since they are the same brand and size. The warp feels drapey and heavy which is likely what the finished fabric will be like. Then it gets all cut up into teeny little samples! The structure is an 8-shaft pinwheel twill which might prove interesting to weave on a table loom with levers instead of treadles. Though I won’t have to change all of the levers with every pick (just on a couple) which saves time and motion. Here’s the draft. Notice the plain weave sections which will help to show where to cut the samples. 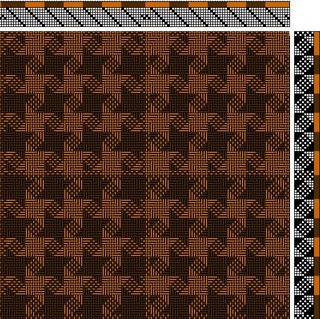 Next, I’ve gotten up to the heel flap on the Sea Socks. Did I mention this colour pattern is really nice? It almost looks like something I would dye myself because in the “solid” sections it’s really short lengths of different shades of blue and green. Likewise the “spots” on the white sections are grey, blue, and turquoise. Very yummy. This is Regia 4ply in colourway 5378. Me likes. Though I forget where I got it. But that’s ok because they won’t have any more of this anyway.

The weather changed yesterday and it rained enough to water everything pretty well. It was cold in contrast to how warm it’s been and, since there’s no heat on in my house, I had to apply more layers on my body instead. Today it’s cleared up somewhat though there’s still a lot of cloud around. It’s supposed to improve over the weekend but not be as warm as it was. Good. Sounds perfect to me. Right now it’s warmer outside the house than in. I think I’ll go spin out there or something and warm up. My hands are cold.