Granny's Got A Brand New Bag

Before fulling in the washing machine: 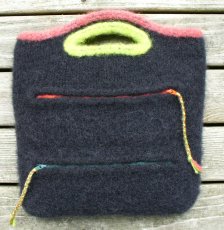 An inside peek with Denise at home: 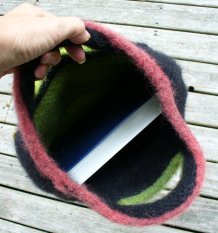 I’m quite happy with how this bag turned out. It didn’t shrink quite as much as I expected (probably because the needle size was relatively small) but the fabric feels wonderfully thick and fuzzy. The i-cord didn’t full quite as much as the main bag because of the different brand of slightly finer yarn and may have benefited from being tripled instead of doubled to cover the black better. But it’s really quite perfect the way it is. It felt like it took me almost as long to sew in the zippers and the pocket lining as it did to knit it! But really it was only a few hours. There’s room in the pockets for all my extra cords and stoppers and I could add scissors, stitch markers, measuring tape and a crochet hook too (except that those are in my sock boxes!) and there’s still enough room in the main section for a small knitting project or a pattern. It would also make a nice little handbag if you don’t have a set of Denise needles needing a home.

It’s been awhile since I’ve gotten a blog post out so I’d better try a little harder this week before I’m gone for 3 weeks away from the computer. I hope I don’t go into withdrawal! Or my faithful readers (you know who you are!) miss me too much and go on to other greater blogs. There are so many out there to choose from. Not that I’m competing or anything.

Backing up: last Saturday we took the old VW Westphalia out for a run on the freeway and she’s tip-top and ready to go. On Sunday we went for one of our famous marathon walks. We headed down just for fun to the inaugural day of a new monthly outdoor fashion market called Portobello West. It was very nice, even if I didn’t buy anything. There was lots of interest from local shoppers so I’m hoping it will continue even into the dark and rainy season. We’ll see. One booth I particularly enjoyed was The Petri Dish who carry (besides other artists' work) these Damn Dollies. They were so nasty/cute! Think Nightmare Before Christmas meets the Addams Family. Creepy but appealing — at least to me!

We continued downtown to get T-Man some coffee to take with us on our trip and headed over to get our usual sushi lunch from the little boats: 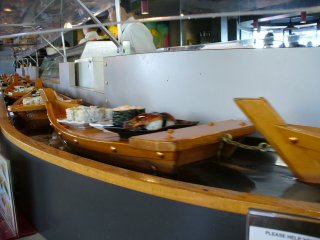 Then on to the department store to get new pillows which were on sale, some socks and nice sweats for me, and I finally found a new wallet to replace mine with the busted zipper. I’ve been looking for a new one for literally years that I liked and it was on sale at about the same price as getting the zipper replaced yet again. When I got home (yes we walked across the bridge carrying pillows!) I got my very old, very flat pillow and had a little funeral for it, carefully placing it in the square grey trashcan…er, coffin to await burial in the city dump…er, its final resting place. I was sad. That pillow and I have had many years and many travels together, bless its now-dearly-departed down-and-feathers. But it just wasn’t supporting me anymore. RIP, pillow.

Yesterday we had a visit from the Ninja and family. Our granddaughter is finally (at two!) saying a few words. Just took time. And we got to see a digital video of our impending new grandson’s ultrasound. He’s so cute! Sucking his thumb in the womb just like his big sister, his dad, and me. He’s got his sister’s pointy elfin chin that she had as a baby so there’s a real family resemblance. He’ll be a wonderful Christmas present to us all — even if his mom would prefer he was born a decent week or so before that. His due date isn’t until the 29th and we definitely wouldn’t want him to be a month and a half early like his dad was. (Not fun to leave your newborn in an incubator in hospital for a month!) But he’ll come when he’s ready, whatever the inconvenience. I’m a gushing Granny already.