That was too exciting! Unfortunately the house across the street and one over was on fire this morning. The last (of four) fire engines is still there mopping up and reporting to the Chief and the Fire Investigation guy. I don’t think they actually needed four fire engines but I guess they were bored and didn’t have anything better to do at the time. They were obviously from separate fire houses because they spent an inordinate amount of time high-fiving and slapping each other on the back. Meanwhile white smoke was pouring out of the house and a few firemen were actually trying to put it out. It was disconcerting to see men with water hoses and axes go inside. Glad it wasn’t my house. It’s a nicely kept little house and recently sold so I don’t know the owners. But I didn’t see anyone who looked anxious enough to be them anywhere among the many neighbours who “casually strolled by” to ogle. Can you imagine getting a phone call from the fire department that your house is burning? Or coming home after work and finding your house in a shambles? The fire looked to be in the basement. Wonder what caused it so I can reassure myself that it won’t happen in my house. Brrr… And it’s raining again as well though it’s supposed to clear up by late this afternoon.

Hmmm…did I mention that the view of the Little Squares Sweater yesterday, though it looks like the front with the knit stitches and all, is really designated the back of the fabric? I hadn’t realized that side was up when I took the picture. The back is actually the beautiful side: 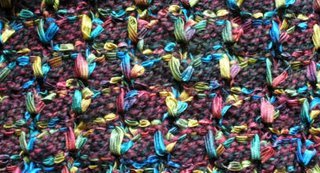 And the part you can’t tell by looking is how wonderful and crunchy it feels, especially after blocking it. The nylon ribbon yarn (Lion Brand Incredible in “Copper Penny”) and the slightly overtwisted 2-ply wool handspun knit on what, for the size of the handspun, are oversized needles (US 9, Denise), just gives it a crêpey feeling that is so nice. It drapes really nicely too, which is a good thing for this oversized kimono sweater. When it’s done all I’ll need is a sweater “stick” to hold it together fashionably recklessly in front. Maybe T will make me one on his rather underused lathe. Maybe if he gets the new one he wants? I’m hoping anyway.

This evening I’m going to the first weavers & spinners guild meeting that I’ve been to since last June. It feels like a very long time ago! I don’t weave much or at least I haven’t for the last maybe 5 years but I do spin occasionally. And it’s not like I don’t like weaving any more. It just seems hard somehow to buckle down and do it. Maybe I need to get the boa off the big loom and get some tea towels on it. I need tea towels. I don’t really need the boa. Even if it does have some wonderful yummy yarns in it including the aforementioned Copper Penny Incredible. It will totally coordinate with my Little Squares Sweater and I have to finish it, just to clear my loom if nothing else. It’s just so hard to sit down and do it. The warp is only a half-inch wide and the weft (not the fancy pattern yarns but the boring 6 shots of tabby between) are just tedious. I’m more than half done. For a whole 2 years! Yikes!

As I was saying, I love my guild. It’s the first one I joined when I found out guilds existed back in 1985. The ladies and occasional gents (the latter of which include our current president and the workshops chairperson) are the most supportive and generous and helpful and genuinely nice folks one could ever meet. Some of them are my best friends (next to T that is). They’ve hung in with me through teenagers, elderly parents, parental demise, discovery of my birth family, sibling troubles and even...gasp...textile problems! They’ve turned me on to a whole bunch of new fibre addictions and I've taught them a bunch as well. The best kind of friends. Many are elderly, some are young and enthusiastic. A few even have sadly passed away.

It’s interesting that a number of my fellow guild members have branched out from just spinning, weaving, and dyeing into the larger territories of surface design, art quilting, book and paper arts, beadwork, and other fibre arts along with me. We’ve expanded. Which is why I recently joined the fibre arts guild as well. Several others from my first guild have done so too. I haven’t found as many good friends in the new guild (apart from those who came from my original one) but it takes time. Maybe after I’ve belonged for over 20 years? Hopefully not that long. But I like it because they don’t limit themselves as much. They’re more innovative and more interested in the “art” part of fibre arts. More interested in galleries and exhibits and statements and art in general. Maybe I just feel a bit restricted in the old guild and a bit more free in the new one? Or maybe it’s because nobody really knows me that well yet and I haven’t taken any guild positions or taught any workshops. I’m laying low and just absorbing. Being one of the crowd. It’s actually refreshing in some ways. However, I won’t give up my membership in the weavers & spinners guild. It’s a huge part of my life. I just zipper my lip these days when volunteer opportunities come up. I don't know why but I really feel I need a break from responsibility. I just want to do stuff for me for awhile.