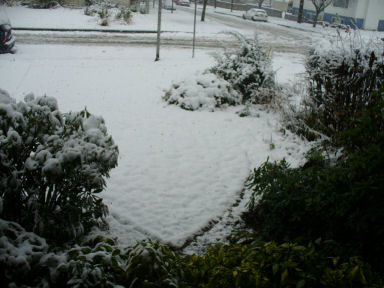 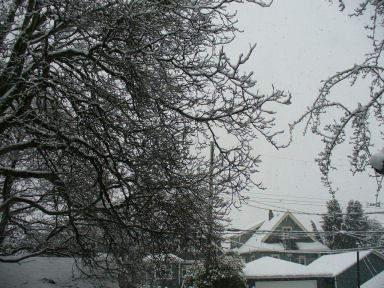 I was wrong. Those teensy snow flakes got much bigger and they stuck! So now we have several inches of the stuff out there. It’s really pretty and I think it’s a lot nicer than tonnes of rain. Yeah, so I don’t have to drive in it and T-Man did the shoveling. I’d still like it but I'm sure those who live where snow is normal think I'm batty! It’s slightly soggy though so I don’t imagine it’ll be around too long. Better look quick! That’s the front yard and the walnut tree in the back yard. Somehow it’s a lot brighter around here now that everything is white instead of mud. I didn’t have to leave the lights on all day.

Back to the NSGS sweater and the crocheted squares. You could make a nice afghan out of this square though I think I would use a larger hook if I made it all out of the rusty red yarn. That would make it more flexible and drapey. But then the squares would be much bigger also! The 3 yarns I used are somewhat different grists: the rusty red is knitting worsted weight, the dried grass coloured one is a little finer (sport weight?) and the black/fall coloured one is fingering weight. But they seem to mesh just fine together. I thought about this pattern as I was drafting it and realized that I’m totally envious of designers who can grade patterns into different sizes. There is no easy way to do that with this one. You would have to make the squares slightly different sizes which would change the look. I don’t think different hooks would be enough to size it up or down. Good thing I’m not submitting this to a magazine, huh?

Anyway, here’s the square and its pattern diagram. I worked really hard on that diagram in Adobe Illustrator. I think I did really well considering it’s not a program I use very often. Or very well. I tend to use the simpler functions and add to my repertoire when necessary. 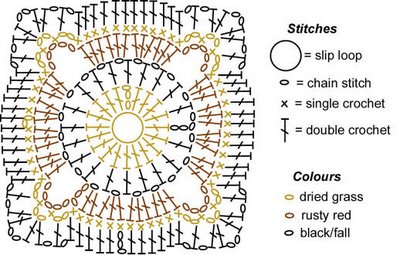 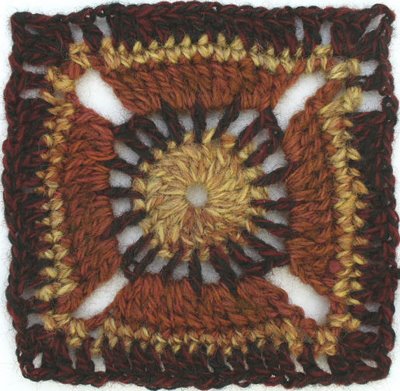 Notice that the rounds begin in different places each time. Since you’re changing colour anyway you might as well stagger the beginnings to make them less visible. It does block out to mostly square. Don’t know about what would happen if you weren’t using something as forgiving and malleable as wool though. So now I’m 3/4 of the way up the back which is the last piece of the sweater. Next I sew all the seams and add the collar and edgings with button loops. I still have to find some appropriate buttons but I don’t know how many I need yet. I have to space them correctly first. Did you know that dressmaking rules say that one button should be right in the middle of your bust so that area doesn’t pop open. One needs to be at the top at the neckline and one at the bottom then space the rest out evenly from there. I wonder how many designers think of that when they make up a cardigan sweater or button-front vest pattern.

I used your pattern and crocheted myself a granny square. It's came out gorgeous. Thank you.