The Sun Is Out/No It Isn't

Well it was out for a couple of minutes between storms. But we’re still on a boil water advisory. Apparently “advisory” means that they haven’t found any bad bacteria or anything in our water but it looks really murky so telling us to boil it makes everyone feel better about it. On the other hand, if they said “order” then the tests would have some positive results and we’d be actually boiling the water for safety. There have been big runs on the stores for bottled water, but since I don’t actually trust bottled water to be any better than tap water with a little filtering, I’ve opted to boil my own. I mostly only drink tea anyway so my water is almost always boiled before I drink it. The water I use for brushing my teeth and taking my supplements has been boiled (twice in my auto-off kettle) and filtered through my Brita. I’m a little more relaxed about washing fruit and veggies where I use tap water and then finish off with a last rinse in boiled water. The dishes are washed in plain old hot tap water and dish soap. I’m not going to go through all the trouble of rinsing in boiled water and I don’t have a dishwasher. A little of the bad bacteria is good for you. Keeps your immune system functioning. I wonder how many people aren’t even bothering with boiled or bottled water anyhow?

We had enough sun yesterday afternoon to go for a walk. T-Man got a bunch more leaves raked up while I swept off the decks (yet again) and the front steps. There are way too many for our leaf cans so we went to get more paper leaf bags from the store. The bags break down and compost with the leaves at the city’s yard waste facility. Although the city will take away as many containers of leaves as we can put out, sometimes it takes a few weeks for them to get around to our house. There’s quite a stack out in the alley at the moment and they aren’t supposed to come until Friday. At least this is better than leaving all the leaves in heaps in the streets, blocking the gutters and making big mushy messes to walk over while trying to cross the street or get out of the car. Apparently there is a law against it that a lot of people ignore! Could this be clearer? Maybe they need to actually start handing out fines? It’s not that much more trouble to bag the leaves up or put them in your garden waste container for pick-up. The city sells it back to gardeners, municipal parks boards and commercial landscapers. I like that it all doesn’t go into landfill anymore. We don’t have enough room to compost all of our own leaves in our own yard and really don’t like the walnut leaves anyway. They’re pretty acidic and work really well to prevent things from growing rather than the reverse. It’s not as much of a problem in a huge mix of compost.

In the Crafty News Department, I’m starting to sew the crochet squares together for the fronts and back of my Not-So-Granny-Square cardigan. I’m working the fronts and back as separate sections. I could have done this all in one piece but since I have a seam down my sleeve, it follows the line better to have one down my side as well. I think it supports the weight of the squares better too so the hem doesn’t stretch out, but that’s only a theory. Unlike a lot of people I don’t mind sewing seams. I use the mattress stitch and work carefully from the front. You can barely see the seam when I’m done. And I graft shoulder seams like this and sleeves kind of like this. Yes it takes some time to do, but if you’re going to make a nice sweater it’s definitely worth it to finish it properly. Otherwise learn to knit everything in the round or relax and go buy your sweater from Walmart or something.

Oh, I forgot to mention how I sew the crochet squares together. In this case I want them to lie as flat as possible and the stitching not to be obvious so I’m overcasting (aka whip stitch) them through the back loops only, matching stitches as exactly as possible. The overcast stitches show a little but since they’re in the same yarn as the last row of my square they just look like part of the work. See? 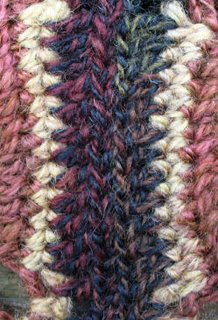 Or not see! It’s not as fast as crocheting them together but it’s much flatter and more invisible. Then I pick up the stitches for the knitted part from the edge of the crochet, just the way I do it for the side of the flaps on my socks. I thought that would make a much neater transition than sewing them together and I think it works the way I envisioned. Here it is from the front and the back: 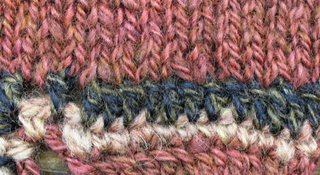 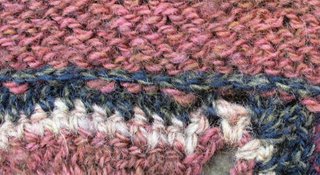 It’s going to make it a wee bit tricky when I sew the side seams though because I’m going to have to use separate yarns and separate techniques to complete the whole seam. I’m hoping it works! We’ll soon see, eh? I’d like to get this done so I can wear it.

I’m almost at the toe of T’s Socka Socks and I haven’t even showed them to you yet. I took this at the mossy base of my walnut tree quickly before it started raining yet again. I tried putting the sock on the deck but it blended in too much on the wet wood! The things I will try to get a half-decent photo for my blog. 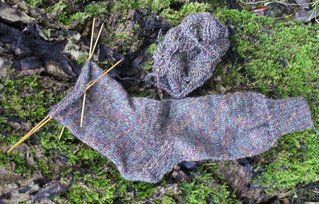