We had a really fun day yesterday in the dye studio. Three of the participants from my last beginner spinning class came to learn how to colour their own fibres and yarns. Unfortunately two more were unable to make it this time. Such a busy time of year but I didn’t want to reschedule! It was certainly a full day and we were all tuckered at the end.

We started with me talking about the synthetic dyes and the many ways there are to apply them. I gave them handouts with all the formulas so they can have the information without having to take notes. Then we went downstairs and washed some of the more greasy fibres. We also measured the water and acetic acid for the soak. After popping all our skeins and rovings into the acid water, we talked about safety concerns and I demonstrated the vapour mask. By now it was time for a lunch break. While eating lunch we talked some more and everyone had a chance to look through the available books on dyeing and colour.

After lunch we got down to business and started mixing up some dye stocks. I demonstrated painting one of the lengths of grey roving just to show how I do it and let them go to it. I nuked the first packet in the craft microwave but most of the rest of them went into the steamer pot. They kept me busy watching the pot, but because there were only 3 students I got a chance to dye some skeins too. This was nice because with such a small class I don’t really make much in the way of profit. At least I got something done for myself at the same time. I painted some handspun for gloves, some sock yarn for T-Man and overdyed some leftover bits of Confetti self-patterning yarn.

The most time-consuming part is washing out all the cups and spoons and buckets and pots and rinsing all the dyed fibres. There’s only room for one at the sink so everyone took turns. There were still one or two items left to finish up this morning, but most of it was done by 4pm. The rinsed fibres went into the washing machine for a final spin-out which helps it all dry much faster. Here’s the proud dyers (that’s me on the left) with their results: 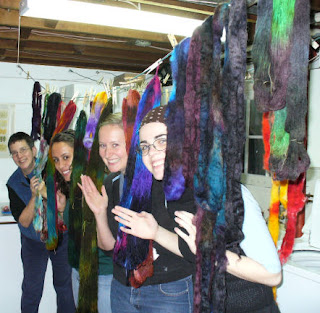 Carolyn, Maria, and Nadia bedecked in their yarns and rovings: 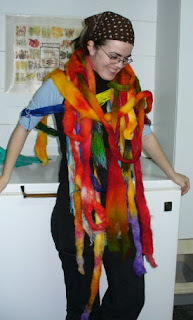