My new grandson was born at 11:20pm on Friday, December 29th at home on the living room floor. He came on his due date (unusual!) and now shares a birthday with my brother. He was 8lb. 2oz. - a whole pound bigger than his sister was, though to be fair she was a week and a half early. The birth went quite quickly and well up until the very end when the baby decided he wanted to come out face-up so mom ended up with some tearing and stitches. However, she looks relaxed and happy and my son looks tired and equally happy! They say this is it for babies for them. It'll be up to my daughter and future-son-in-law to give us more grandkids!

Though there was a great resemblance in their ultra-sound pictures, my grandson now looks less like his sister did as a newborn. He has a handsome dimple in his chin instead of her little elfin pointed one. He's quite solid and by all reports came out yelling lustily. He has lots and lots of black hair and baby blue-violet eyes. Fingers, toes and other parts all accounted for. As proud grandparents we think he is totally adorable! We got to hold him yesterday when he was only 14 hours old. 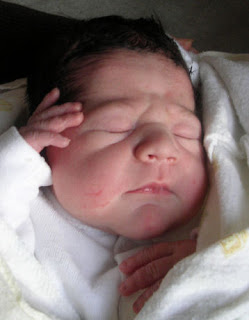 Love the slightly worried crinkle and the hand on the brow. Thinking deep thoughts there. Either that or concern because I just pulled his hat off!

I was going to post my finished Swallowtail Shawl which is done and currently blocking but I don’t really have time right now. So it will be the first Finished Object posted in 2007. I was also trying to finish the Forest Socks for T-Man which would be Pair Number 20 for 2006 but I’m not quite up to the toes on them yet. Oh well. There’s always next year. Still 19 pairs is one every 2.7 weeks. Not too shabby, eh? And I’m one of the slowest knitters on the planet. Just persistent.

Hope everyone has a Happy New Year!!! We won't be staying up since my eyes begin to droop around 8:30 pm and it's all downhill from there. If we're lucky we can get soundly to sleep before the firecrackers, banging of pots and freighters honking in the harbour at midnight and perhaps we won't be woken up.

Our best to you all on the new family member.