I’ve put the Penelope Beret on hold for the moment (I have a migraine today so thinking is painful) and decided to start yet a new project instead. Well truthfully I started it yesterday (pre-migraine) — the Swallowtail Shawl from Interweave Knits Fall 2006 issue. It’s quite popular and there’s actually a blog for the knitalong for this pattern. It called to me the minute I saw it because it’s a small wearable size, not a difficult pattern, and there’s a chance I might actually finish it sometime in the next decade. I also have a huge skein of super-soft merino/cashmere laceweight yarn in the stash just begging to be a shawl.

So I started swatching teeny tiny little shawlies just to test out the odd pattern beginning and the needles. As luck would have it, I own every size of needle known to womankind except the one I needed for this, a 3.5 mm 24” bamboo circular. I had an old Crystal Palace bamboo circular just the right size but one of the tips was damaged. Squashed flat. No idea how that happened. Maybe caught in the hinge of the huge old wooden box I used to keep them in? Nothing for it but to go buy a new needle. Awwww…the trials of living just 3.5 blocks from my LYS.

Of course while I was there I had to buy some yarn as well as the needles (BTW I got Clover Takumi 3.5 mm 24” circs). The yarn is for a fuzzy Fibermania’s Shawl for my sister’s belated birthday present. She liked the one I made for myself. I already had one ball of the novelty yarn Sandesgarn’s Chili in oceanic blues (this is what I made my beaded mermaid doll’s hair with) so I just needed one more ball and a couple of balls of Sandesgarn’s Smart (wool DK weight) to coordinate. This shawl is really quick to knit on 9 mm Denise needles. This sister will be getting it for Christmas — but it’s still a birthday present! Not my fault all of my siblings were born in winter. Mother blames it on Spring Fever. Speaking of that, it’s also my baby sis’s birthday today! I’m going to be knitting another fuzzy shawl. Since she lives in Mexico and I won’t be seeing her until summer maybe, there’s no hurry to finish. You can’t mail anything to her or it goes astray so we’re used to gift giving whenever. Of course if I’d made it ahead of time, Mother could have delivered it in person last month. But that means Thinking Ahead. Heh. But I digress.

Back to the Swallowtail Shawl. Here are the teeny tiny shawlie samples: 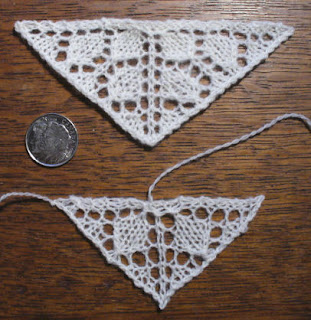 Yes, that’s a quarter (special 2005 Canadian veterans issue, Queen side down) for scale. The top sample is the one I did beginning with 3.25 mm Aero aluminums (too small, too slippery) and segueing into 3.25 mm Clover bamboos (too small) after the first repeat. Started again with Denise 3.75 mm (US size 5). Way too loose. Frogged. This is where I realized that 3.5 mm needles (which the pattern actually calls for) were correct and started again with the Addis since they were the only ones I had in the right size. Uh-uh. Too slippery, too short, and too blunt. Frogged again. The second smaller sample is done with my pristine new Clover Takumi bamboos in 3.5 mm. Perfecto. At least it’ll be big enough for a shoulder wrap instead of a handkerchief! Note too how much nicer the lace looks after I settled on which particular decreases I wanted to use. There may still be a glitch in that tricky beginning with the provisional crochet chain cast-on and the picking up in the garter bumps on the side of a weensy little piece of knitting. It’ll be pretty slick looking though when I get it exactly right. Fourth time lucky?

Too bad you can't feel this stuff. It's soooo soft with a little bit of halo from the cashmere. I wound the huge skein of yarn into a ball and found 2 knots in the yarn. Not bad for several thousand metres actually. I wound about 6oo yards back into a skein for dyeing. Well, you don’t think I’m going to make boring white lace, do ya? I went down to the dye studio and popped the skein into my acid bucket (I’ve been saving it after dye classes as long as it looks ok) and then mixed up some more dye stock since I was all out of most colours. While I was doing that, I decided to test some of my older dyes on a length of roving to see if they were still functional. They were but one old brick red of unknown provenance seems rather weak. However it’s a great colour so I used most of what I’d mixed plus some gold, scarlet, and a wee bit of turquoise just to tone things down. As this is going to be for lace I didn’t want too abrupt colour changes, just subtle shadings that won’t obscure the lace happening. I’m so pleased at the final results! It totally reminds me of Utah’s red rocks. I’ll take a photo tomorrow when it’s dry and before I wind it back into a ball.