I do love colours! They whisper to me about wonderful things. I can wax poetic over a seaside sunset, a fresh box of crayons, fall-tinged shrubbery or sample cards in the paint store. I don’t really have a colour that I despise although there are a few that I prefer in smaller amounts that are mingling well with others that I like better. This includes white and most pastels. I like my colours deep and rich and a little askew, somewhat off the pure hue and into tones and tertiaries. But that’s just me. I know folks who only like blues and purples and hate my favourite rusts and oranges. I know someone who hates green in any form, including the natural greens of plants. She even avoids watering her lawn so it turns brown! There are lots of people who avoid yellow like the plague because they think it doesn’t look good on them. Or grey and brown because they find them depressing. Interestingly almost everyone likes blue which accounts for the lasting popularity of indigo-dyed denim.

Did you know that English has the most words for colours of any language? We don’t use them all because some of them are obscure or somewhat imprecise and a lot of them have other meanings besides describing colour. Can you picture puce? How about taupe? Fawn? Celadon? The exact shade called Prussian blue? Or that one from the old crayon box: flesh? (Never matched my flesh nor anyone else's that I know of.) I was for years confused about vermillion. I thought it was green, not red. Don’t ask me where I got that idea. In the ancient world and in some other cultures, there are few words for colours. Black and white were first named, then red, then yellow or green, and lastly blue. That doesn’t mean that folks couldn’t see all the many colours around them, just that they didn’t think they needed to be named. I find that fascinating. I also read recently that there are a few women (always females) who not only have the normal three types of colour-perceiving cones in their eyes, but also a fourth type that is sensitive to yellow. This gives them more differentiations between yellow and green but they have difficulty describing what they can see that is so different from the rest of us. There are no words for it. There are also some people (mostly male) who cannot see certain colours at all. One of my son’s friends is so profoundly colourblind that he must infer colours from other details or from memorizing other people’s statements. (Bananas are yellow because everyone says they are.) I always wonder exactly what the world looks like to him. I’m sure it’s not like black and white film. Certain patterns that we don’t even notice give him serious headaches.

All this colour chat is making me want to get working on my Icelandic Shawl. Here’s the next yarn I spun up for it: 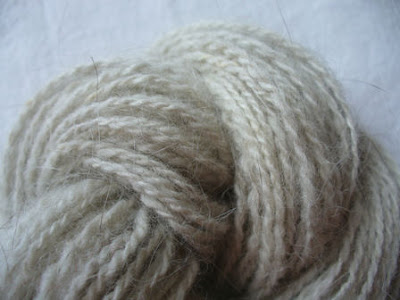 Yeah, I know. Not much colour here! This one is quite different — some 60% wool/40% Canadian blue fox blend that I got a long time ago from Folknits in Whitehorse (back when Wendy Chambers still had the store with the moose on top). Apparently these rare fibres are from arctic foxes raised for their fur but please don’t ask me how they are harvested. Maybe they are shed in the warm season from animals that weren’t harvested for pelts. I’d like to hope no foxes were harmed to obtain this stuff but can’t be sure. I’ve had the roving so long that it was starting to felt a bit in the bag. I spun it as I do most fine yarns: kind of semi-worsted in a short forward draw. There was a wee hint of scurf in big flakes that were easy to remove as I went. I treated the spun and plied yarn (about 120 yards and 20g) to Judith Mackenzie McCuin’s torture finishing in hot and cold water with quite a lot of agitation and a beating on the counter to felt it slightly and bring up the nap. I’m hoping this treatment will keep it from felting up more than the other yarns in the shawl. The resulting yarn is a pretty pale blue-grey and somewhat but not too fuzzy. I have never seen any more of this stuff anywhere so I consider it kind of a treasure. There was 100 g originally so there’s still enough left for something else. On to spinning the next yarn for this project. If you know me well enough, you won’t wonder why it’s orange! Three more to go after that. Whew. It’s been taking me at least a day or two to complete each yarn.

Addendum: While babbling about online magazines yesterday, I forgot to mention the Crochet Insider. Still the July issue up but it’s a good one. Lots of interviews with well-known artists. All the old stuff still available in archives. Go. Read. Ogle. Have fun.

Hi.... isn't veridian a green? Maybe that's where the vermilion/green connection originated. My old French teacher used to tell us French had more words for tonal variations than English, because the French were so tuned into couture and fashion. (I believed her...I was only a kid!) Her favorite example was "glauque" ---"You English have no word for this color." Her description of glauque? "When you take a stick and stir up the mud at the bottom of a stagnant pool, then you have glauque!" I've never wanted to knit anything glauque, but I enjoy looking for it.

I love color, and I can choose colors I like, but I have a terrible time combining them to get the combination I see in my mind.