I did love me Robert Louis Stevenson’s “Treasure Island” when I were a sprout tho’. And in the movin’ picture version, Robert Newton’s Long John Silver mite o’ been a scurvy dog, but he were me hero! Me pappy an’ me used ter watch old swashbucklin’ movies on TV and no gentleman o’ fortune could talk as colourful as ol’ Long John. He’d be embarrassed to know he be the Patron Saint o’ this day unless ye showered him w’doubloons as well. But shiver me timbers, th' real Bobbie woulda loved it! Unfortunately he’s been carousin’ in Fiddler’s Green since I were a lass. The grog got ‘im, not some scallywag’s cutlass.

Stow that, ye gobs! I can’t do a whole post like that. It’s exhausting! So I’ll show some photos instead. I’ve been steadily working on the Icelandic Lace Shawl. I’ve been successfully using the Russian Join to link in the next colour pretty invisibly. 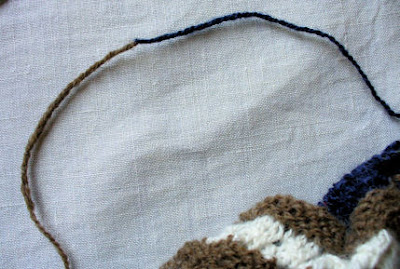 Now I’m heading into the Main Triangle (aka the doldrums) which at least has the advantage of the rows getting shorter as I go. 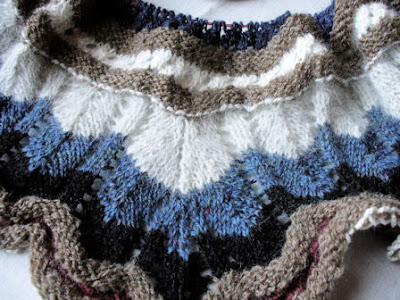 So far it looks like something the cats got into but I’m hoping that as usual, all will settle down in the blocking. I’m not so much liking that single line of purl blips between the blue fox and the moorit. It’s not a mistake — I triple-checked. However in the original those two colours were much closer (light grey and white) and it doesn’t really show. The designer was trying for more of a blending between back and front of the shawl but I think there should be more than one place where this occurs so obviously. A “mistake” repeated is a “design”. If necessary I may have to introduce another one on purpose when I knit the bottom edge.

And I promised a photo of the cobblestones and brick work that we did (well, mostly T-Man did) in the back yard. 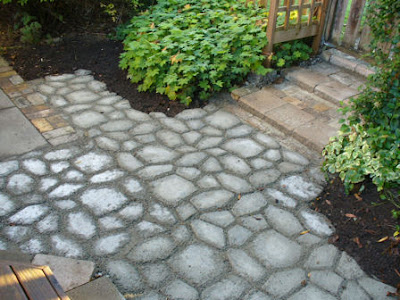 Bet you can’t tell which cobblestones we did first! We got better at mixing concrete as we went, though there wasn’t a lot of consistency in the bags of mix anyhow. At least there won’t be mud puddles there this winter. Everything is still wet from last night’s rain but it’s sunny out now. Relatively cold though. I’m wearing my woolies in the house and the furnace actually kicked in this morning. I’ll adjust eventually so that I’m comfortable at the lower temps. I’d rather be too cool than too hot. Just me.

Thank you for your lovely comment - and I love the crosshatch socks. Your Icelandic Lace Shawl is also looking good - keep going with the Doldrums, they do disappear quite quickly!