Do You Believe In Magic?

I believe there’s a whole lot of magic in textiles. The magic of a fat caterpillar exuding the stuff of exquisite silks. The magic of blue forming before your very eyes as you draw fabric from a vat of smelly greenish-yellow indigo. The magic of a sheep’s dirty old coat turning into fine yarn at the spinning wheel. I made some magic happen today. I started with some very coarse dark grey wool roving (I have pounds of this stuff that was gifted to me) and I made felt insoles for my Purple Elephant Slippers. I did it all by hand too, no washing machine involved. First I put down a double-wide layer of bubble wrap (bubbles up for this coarse felt) and then a double-wide layer of nylon netting. Then I began covering an area about 12” x 16” with wool pulled from the roving. I used thin layers, first laying them in one direction and then the other, until I had a fluffy pile nearly 2” high. I folded over the netting and stitched it all around the edges with thick polyester thread and big stitches, then continued with a + and an x across the centre to make a mini-quilt. I probably didn’t need the stitches at all but at that point I thought I might be using the washing machine later and the wool needed to be in a good sturdy package. Of course my friend Jo Anne’s cat Cloudy decided that it was a great cushion to curl up on while the Spectrum Study Group ate lunch! He smacked at me when I tried to remove him, although I did apologise first. He wasn’t done with his nap yet.

I wet the quilted wool down with hot soapy water and a sponge until it was all wetted out and then rolled it in the bubble wrap with a piece of foam pool noodle in the centre. The sausage was secured with rubber bands because I was lacking strips of nylon stocking which would have been better. After most of the excess water was squeezed out, I rolled it back and forth on the table with my forearms for awhile and then opened up the package, turned the quilt a quarter turn and re-rolled. Even though I was using the weight of my body to help, I quickly got sore (the old pinched nerve in my neck) so I used my feet for a bit. Everyone else was still working on felting scarves using merino/tencel or merino/tussah silk fibres, so I sat and chatted and knit for awhile to rest my neck and my foot. My neck only hurts when I press down too much which is exactly how I damaged the vertebrae 3-1/2 years ago. Knitting doesn’t usually bother me unless I really overdo it and then it’s mostly my wrists that get sore. What a wreck!

After I got home I decided the felt was secure enough by now that it wouldn’t fall apart so I removed the stitching and nylon net and started rubbing the piece on my old washboard. That was the most fun because I could feel the felt hardening under my hands. When it was as solid as possible, I rinsed it in alternating hot and cold water to get out the soap and remaining wool grease. There was quite a bit of grease left in this stuff. Coarse and greasy and a dark grey that’s hard to dye over into nice colours. Lovely wool, eh? Ten pounds worth originally. No wonder it was a gift! I certainly wouldn’t have bought it myself. At least it felts eventually.

Now I had a thick piece of felt that was several inches smaller than the original mini-quilt. It’s still big enough to cut two innersoles out of it. It’s somewhat hairy but good and solid. Too boring in grey though so I poured some dye stock over it and ran it through the microwave to set the dyes. It’s much prettier now in purples and blues: 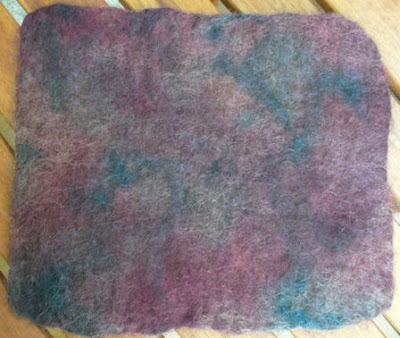 Not the right purples and blues, mind you but at least it’s not dark grey any more. I’ll cut it into innersoles to put inside my slippers where nobody but me will ever see them. Of course I could have bought some innersoles for a few dollars but where’s the magic in that?

Be aware that I can’t easily reply to comments left on my blog unless I already have your email address or I reply directly in another comment (which I'm not sure anyone reads). Doesn’t mean I don’t appreciate every single word though! So to Diane who left me a comment about the Sock Toe Grafting Tutorial, you’re welcome. Glad you found it helpful. Susan, glad you’re all safely moved to your new home. Hope you find your way out of Boxed Hell soon. Rosemary, I always appreciate your thoughts. Sharon, sorry to disappoint you about the new Twisted Sisters book. I still haven’t had time to read it through yet so hopefully I’ll be posting more eventually. Hope the rest of your books you ordered meet your expectations. Surprisingly, I don’t own any of them! You’ll have to review them for me. And Chelle and N Maria, you two are just so darned sweet! I’ve left out a few names from recent comments but you know who you are. I always say I write this here blog for my own amusement but it’s really nice to share with those who care to read it. HUGS!