I must not have enough things on the needles because I’ve been having a return of startitis again. I’ll tell you what I’ve been up to in a minute but first — I’m so sad that I had to frog the nearly completed BOTH SLEEVES on my Katharine Hepburn Cardigan! Boo-hoo! Sniff! It just wasn’t coming out to anywhere near the right gauge, especially row gauge where it’s way off at 4 extra rows per 4 inches. Although I might be able to fudge by knitting more rows it’s using up a lot more yarn and I’m not sure I have enough to do that. Or enough patience! It’s really old yarn too and has been marinating and aging nicely in my stash for so long that the shop I bought it from no longer exists. I think the NZ yarn company still does but they don’t make that yarn anymore. It’s a 4-ply crepe yarn in about a sport weight, waxed and on a cone for machine knitting. It’s lovely stuff and I have 1-1/2 of the 500g cones. On the McMorran yarn balance it comes out to about 1500 yds per lb or 1650 yards per cone. The pattern calls for 1800 yards and I think that’s just cutting it too close. So ziiiiipppp…and back to the swatching.

Even though I washed the first swatch and blocked it, it really wasn’t at the correct gauge. Now that I’ve re-measured again the stitch gauge is actually off nearly as much as the rows. I don’t know what I was thinking when I carried on regardless. A case of mad startitis? That rush of getting a new project on the needles? I actually lied to myself about how it will “block out correctly” later? Sigh. All that knitting that I’ll have to do over again. But I tell myself that if it doesn’t fit when it’s done then that’s a lot more knitting and assembling to pull out than 2 not-quite-completed sleeves. No wonder the whole project has been in time-out for a couple of months! I had to come to terms with my mistake and get up the courage to frog the whole thing and start again. Here I go.

Speaking of startitis, I’ve also started crocheting the Boteh Scarf from Interweave Crochet’s Spring 2007 issue. I’m using some sock yarn that formerly was the beginning of the Jaywalker socks but got frogged. It was dyed in the ball and there is a lot of uneven colour distribution through each of the two balls and the balls don’t match well either. See? 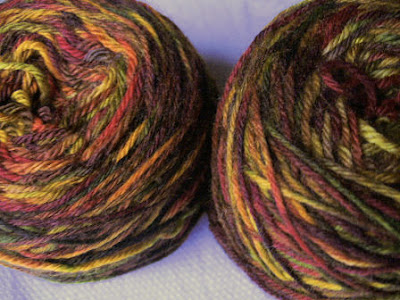 For this project I don’t care. I started by just swatching for the scarf because I was planning to narrow the pattern somewhat since I like skinny scarves. It took me a little while (and a couple of froggings) to get comfortable with crochet again and to understand the pattern. Not that it’s particularly hard or anything but I haven’t done much crochet recently. There is a lot of hdc (half-double crochet stitch) and that’s not one I’ve used a lot in the past though it seems to be very popular right now. There is also dtr (double-treble crochet stitch) with 3 wraps around the hook. Mine are very sloppy! The Sisu yarn is quite splitty, worse even for crochet than it is for knitting. I even changed hooks a couple of times until I found one that felt more comfortable. I frogged it one last time and started again for real on less stitches. It's much nicer this way, at least to me. I quite like how the fall colours are turning out with this yarn. Much better than the ill-fated Jaywalkers anyhow. 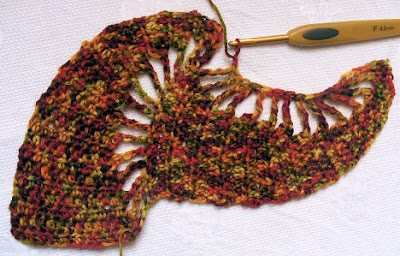 I really like crochet but the reasons why I don’t do more of it are many. I have to concentrate more so I can’t do anything else at the same time. Even listening to podcasts can throw me off. It uses more hand motions and my neck gets tired quickly so I can’t do it for as long at a time. And don’t tell anyone, but I actually like a knitted fabric better than crocheted. Crochet is really good for some things particularly 3-dimensional items that need to hold their shape. It is definitely faster to complete the same amount of area than with knitting. I can design crochet patterns fairly easily. But it just doesn’t turn my crank quite the same way as knitting does. Go figure.

I’m up to the heel turns on T-Man’s Earl Grey Socks. That means they’re almost half done. I like that I can mostly knit them without paying much attention except at the two little traveling stitch areas on either side. And best of all, T likes them just fine even though there was a glitch in the dyeing and the yarn has “freckles” of darkest navy on it in various places. This photo is from yesterday. I’m farther along now. 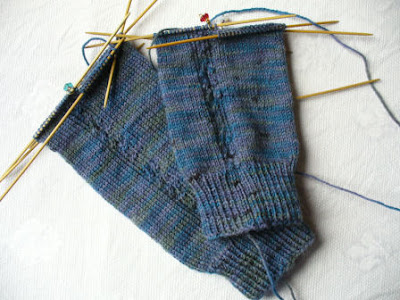 What else? The city’s civic strike still drags on. The “inside” workers have voted to accept the latest contract offer and go back to work but the “outside” workers (including parks and garbage pick-up) and the library workers didn’t get enough yes votes. Apparently 58% isn’t enough — they needed 66%! 3 months without seeing a garbage truck is a bit much. Surprisingly most of the city doesn’t look too much worse than usual. The management personnel have been picking up the street and park bins at least and a lot of people have been taking their garbage to other municipalities’ transfer stations and waiting in long lineups to pay to have their stuff dumped. Some folks who live in apartments etc. have private bin service. Good thing we don’t create a lot of garbage ourselves and have a compost box and space to store recycling. We’re holding out so far. Though it’s getting old really fast. Other stuff like closed community centres and pools and weeds in the parks don’t affect us. And parking meters are deemed an essential service! Not city-run daycares or seniors programs however. Sorry. Rant over.