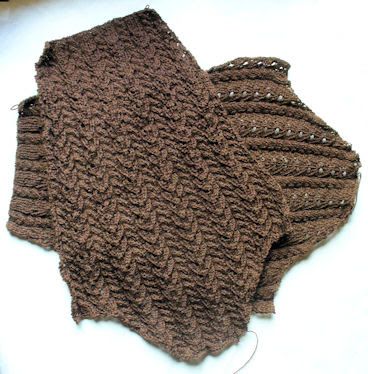 Yep, I did it! I finished the Hepburn Cardi’s sleeves, both at the same time. It took me all morning and I shouldn’t have been so smug yesterday about having the whole thing charted out because I found a few errors of my own making. Happily I was able to adjust as I went and now the chart has been edited in retrospect. It doesn’t matter now, I know, but that doesn’t stop me from correcting my mistakes and printing out a good copy for my notes. I’m anal like that. These aren’t blocked yet since I plan to block all the sections at the same time. I think I’ll cast on for the back next.

The winter issue of Knitty is out today and boy, Amy better get more bandwidth because it’s really really slow with everybody all wanting to see it at once! That’s what you get for doing a good job and becoming popular, eh? So far I’m totally in love with Romi’s lace wimple with beads. And just about everything else. Though it’s kind of hard to see when you’re getting “page not found” errors from too many people trying to all look at the same time! I’ll leave it for awhile and go check back later. I’m starting to get annoyed that there are so many great patterns out there to make and not enough time in anyone’s life to do them all. Wahhhh!!!

BTW, I appreciate the comments on yesterday’s post. It’s nice that someone besides myself reads my tappings. I do think about these things a lot because, like many people these days, I like to minimize my consumption and waste. But I hope I didn’t sound too holier-than-thou because I haven’t even approached the level that I’d like to be at. I haven’t even finished getting rid of the junk that’s still lurking in the corners. (Though my attic spaces are clean!) Let me put it this way: I still haven’t found the portable hard drive with all my computer backups that I “hid” back in June before we went on holiday! If I can lose something the size of a large book in my own fairly small house, then I still have way too much stuff.

Changing the topic entirely, we had a lovely double rainbow yesterday afternoon when the sun peeked out of the rain for a moment or two: 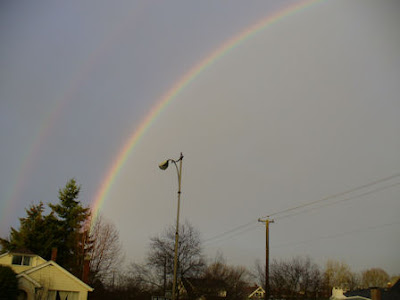 It’s showering on and off right now even though it’s supposed to be sunny with cloudy periods. Typical winter weather around these parts. Any season’s weather, come to think of it. We have two seasons really — cold and wet or slightly-less-cold and wet. With occasional sunny periods thrown in just to remind us there is hope. Just so we don’t all jump off a bridge en masse.

Gee, and I was hoping for a nice day because I really have to get out and get a few groceries. I usually shop for fruits and veggies and dairy once or twice a week and then we do a larger shopping to a supermarket in the car once a month or so. The Wobblies have put me behind and the produce is down to a few limp celery sticks, half an apple and a jicama that needs to get eaten soon. (Hmmm…that sounds like the makings of a yummy slaw, doesn’t it? Just shows you how I can continue to eat out of the food stash for a good long time before things get really desperate!) Guess I’ll wait for T-Man to get home and then we’ll decide if we’re walking or driving. And it’s brightening up.

What a pretty rainbow, thanks for sharing!