The windstorm yesterday afternoon and last night was pretty fierce. We had to close our bedroom window because the roaring sound kept waking us up. It sounded like it does on those old movies! Interestingly our side fence which was leaning inward and resting on our pieris shrubs is now leaning outward in thin air. It never did that in all of the bad winds we’ve had in the last few years so it must have been both strong and from the west this time. Hopefully T-Man will be inspired to get this fixed now even if he doesn’t want to do it himself. There’s small branches all over the place and I heard that downtown some plywood fell from a building site and smashed into the cars below (luckily nobody was hurt) and 2 large glass windows fell off one at a time from a highrise so that the street had to be blocked off until they could get things secured. Of course there were power outages and trees down blocking roads and bridges and all the usual stuff. Too exciting.

Anyway, today it’s sunny and we have pictures. Here’s my FO from Saturday. 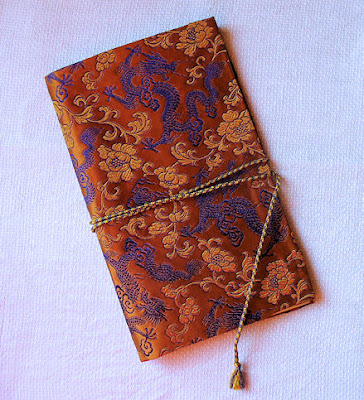 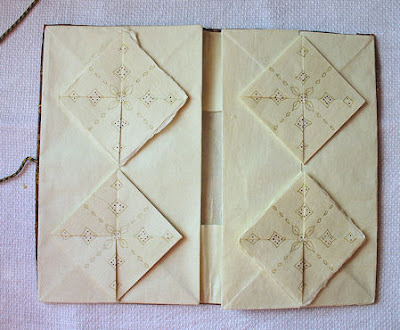 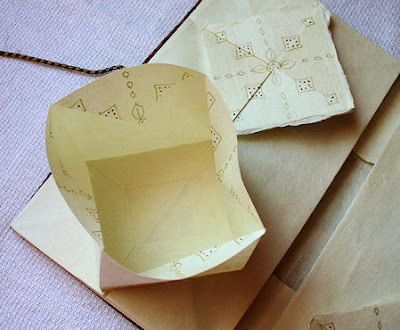 Comments: This case took several days of cutting and pasting and drawing little designs. My decorating is not nearly so elaborate as the original versions are! All the different pockets, particularly the “flower” pockets really appeal to me. Note that there are pockets underneath the “flower” pockets and a large pocket under it all.

Unfortunately I don’t do embroidery (well, hardly ever) so I have no real use for this item. Rather than it gathering dust, I may gift it to Milady Daughter who does cross-stitch and other types of fancy stitching. I’m sure she can pass it off as SCA “period” if she wishes.

I’m up to the heel turns on the Rusty Socks which are of course still turning my fingers orange, especially the nails. I almost don’t notice anymore! I’ve also been spinning but not on my Backyard Dyed Wool (remember the madder, marigold and walnut?) but Seawool (merino wool and Seacell) using my new lace flyer. I think it will become an Ice Queen. Though I’m not sure what dyes would work with both protein and cellulose. Perhaps indigo would be nice or maybe one of the other natural dyes like logwood. It’s only going to be about 25g or so in total. Maybe I should pick the beads first and decide what colour the yarn should be from them! 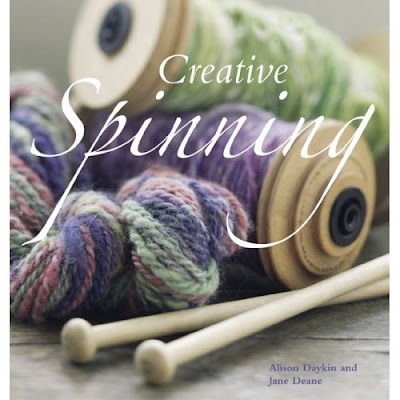 I really wanted to like this book. There are so few good inspirational books on handspinning out there. This one has lots of pretty pictures but that’s about it. Unfortunately it has problems, big ones, and I just can’t give it a thumbs-up. First of all, the authors are British, which of course isn’t a problem except that they have different fibres available than we do in . Since the whole second part of the book is “recipes” that are very specifically spelled out, it might induce some pretty serious frustration if you were trying to locate wool or something of the sort to copy the yarn in the book. I’ve not only never seen any but didn’t recall hearing of this breed! Getting out my trusty copy of “In Sheep’s Clothing” I find that it’s considered one of ’s rarest breeds so chances of being able to purchase any without considerable effort and expense would be rather slim. And that’s just one of the fibres. There are others that might be nearly as difficult to obtain and some are even required in specific colours, both natural and dyed. There are no sources at all listed in the book, though there is an index and a small glossary of terms.

Backing up, the front of the book contains the requisite beginner spinning lessons, illustrated by drawings rather than photos. Since I’ve been spinning so long, I can’t really tell if one could actually learn from these, but my impression is they are rather rudimentary. One big error I found is where the authors state that for worsted yarn you pre-draft combed fibres to the thickness of the wanted yarn and then just apply the twist with spindle or wheel! Yikes! Wrong, wrong, so wrong. There are several other spots where the instructions are fuzzy. One tip is to test for balance throughout your plying without telling you how to do that. And there unfortunately is more of that kind of thing in this section. I can’t recommend this book as a learn-to-spin textbook.

As I’ve mentioned, the majority of the book has lovely inspirational colour photos. A two-page spread includes the colour scheme and theme plus the spun yarn and a knitted sample swatch in stockinette along with the instructions to re-create the yarn. At first blush this seems very lovely and the yarns reflect the inspiration quite well. But looking deeper the instructions are at the same time both too specific and not specific enough. “Spin a fine z-spun singles” without ever telling you what exactly is meant by fine, medium-fine, thick etc. My “fine” is definitely not their “fine”! And what is meant by “medium twist”? In my opinion nearly every yarn shown is what I would consider very under-plied. The authors are purported to have many years experience in spinning but the yarns shown are very primitive, like a fairly newbie spinner’s work. Which may be what they were aiming for but I would be embarrassed to show some of them to other spinners if they were mine, far less publish them in a book. I like to think that after 30-some years of spinning the techniques should improve! There are some interesting ideas but they’re just not that well executed, at least to my eye. For these types of fancy spinning techniques, a much better book is “Spinning Designer Yarns” by Diane Varney which has been reprinted by Interweave Press. Perhaps I’m too much of a perfectionist and am missing the point here? If that’s the case, please enlighten me.

I think it would be a better exercise to take the same inspirational photos and make up your own yarns using your own stash or available fibre sources. That at least would be more of the “creative” part that the title suggests but doesn’t really deliver on. I’ll be waiting for Pluckyfluff (Lexie Boeger) and her new book “Intertwined” to see if she gets a better handle on this subject. I already have it on order and it should be available soon. For some reason I like her funky yarns much better. They are even more creative but the execution is superior.

The sewing case is gorgeous!

Hmmm...you've given me a great idea!

Love the sewing case! And I always enjoy reading your book reviews. I know how much work goes into them. Too bad about this book. I hadn't heard about "Intertwined" -- might be interesting.