End One, Begin Another

I finished the B-Bil Socks yesterday and got them washed and blocked. So here they are:

Comments: Nice yarn that I haven’t used before. Knit up very well. He asked for purple socks. Hope he likes these! BTW, most of the orange dye from the Rusty Socks wore off the needles before I finished knitting so they’re almost back to their normal colour now.

Now I’m on to the next pair which are due February 10. It’s my mother-in-law’s birthday (aka Nana) and she’ll be turning 80. She loves my handknit socks because her feet are always cold so she’s really easy to knit for. I asked her if she’d be interested in some overdyed sock yarn in a deep burgundy colour because there’s only 75g which is enough for small socks like hers. She was happy with that idea and I found an interesting pattern at Posh Yarns for cable and rib socks based on EZ’s No Tears Socks. I have had to reduce the size somewhat though because they are on 72 sts which is a lot for her tiny feet and even for my more normal-sized ones. (Some people must like looser socks than I do.) Even though the cables draw it in a bit the ribs are stretchier than normal st st. So I reduced the cable size down by taking a purl stitch off each side of the reverse st st background and a stitch out of each side of the cable, thus making a 2/2 cable instead of a 3/3 cable with 2 purl sts on either side of the widest part of the cable. I also shortened the 6 rows in the centre of the larger section to 4 rows to keep it in scale. This works out right and segues nicely with the k2/p2 ribbing if I begin the cables on a different row than specified. This cable pattern: 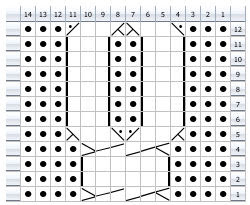 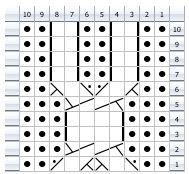 Now to knit it up and test it out! I kept the 6 ribs on each side of the cables which are situated at mid-back and front of the sock. The rest is just sock knitting as usual. The pattern shows a plain st st heel flap but I think I’ll use an eye of partridge st which is much nicer and more durable. Regular heel st looks like 1/1 rib which kind of clashes with the 2/2 ribs on the rest of the sock.

I used Knit Visualizer to create these charts. I love this program and it’s soon to become even better when Version 2 comes out. If you’d like a preview, download the new PDF manual here. I can hardly wait! Colour! Proportional rectangles instead of squares! Custom symbols! Good stuff. I truly need a program like this because I tend to chart things out that aren’t already charted. I also like to mess with previously designed patterns, as I did above. And I like to make my own designs, moving and tweaking motifs to my heart’s content. Having a nicely printed chart is helpful for my notes too and you can make them bigger (for ease of reading) or smaller (to get a large chart on a page) if you wish. I’ve used Knit Visualizer even more than I had originally thought I would when I downloaded it a year ago. Yes, it’s pricey and there will be an upgrade charge for those of us who already have the earlier version, but IMHO it’s worth it. Remember it’s not like this is software created by teams at Microsoft or Adobe or Corel — it’s just at home with her computers and her knitting! It’s self-publishing to a limited market. She deserves to be paid for her time, hard work and expertise. At least that’s my take on it.