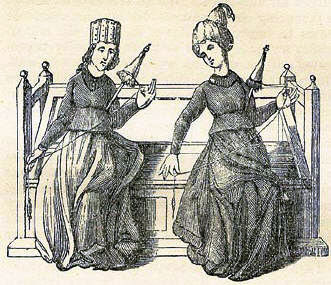 No, we’re not talking about playing lots of rock music! Today, the day after Twelfth Night (also called St. Distaff’s Day) is that time of year after the holiday festivities when we spinsters must go back to the spindle and wheel. I don’t know, do the ploughboys have to go back to work today too since it’s Monday or do they get to tease us for a whole week until next Monday? I’m not sure of the finer points of Rock Day vs Plough Monday, but I’d rather they keep the firing of the tow to a minimum! However I will keep a bucket of water handy to wet-spin my linen thread or, alternatively, to put out fires and douse my ploughboy if the situation arises.

Meanwhile, I’ve been working on the Auntie90 gloves: 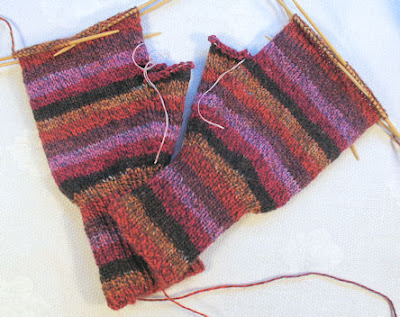 I’ve got a couple of fingers done since this photo. I’d forgotten what fiddly things they are! Not too bad though but they do take time to complete. I also got a sad tale from my Birth Mother about her fuzzy burgundy-coloured scarf that I made her 2 years ago. She lost it and wanted a replacement. Unfortunately I found the same yarn but not the colour she wanted so for now she’s getting a blue one: 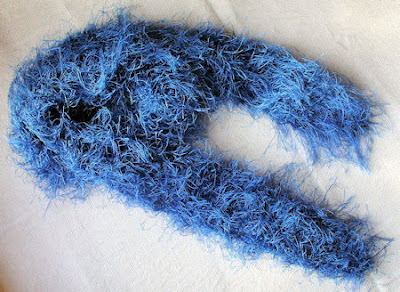 Comments: This blue version is a compromise. I may still hunt for another ball of something fuzzy and burgundy and make another scarf. It’s quick and only takes one ball of yarn. I had about 2” left at the end, barely enough to finish off.

I still need to dye the yarns for The Ninja’s and my Bro-In-Law’s birthday socks, but I haven’t gotten around to that yet. I’ve only just been feeling better enough to be a bit more active and the first priority is the neglected housework. I’m already on the second of 4 loads of laundry and the dishes still await my attention. (And they can darn well wait until I’m good and ready too!) We also went for walks, both on Saturday and Sunday, which felt really good to both creaky body and fuzzy mind. We even spontaneously decided to see a movie while we were out yesterday. “The Golden Compass” is an absolutely fabulous movie! I love me a good fantasy story and this one is intricate and the characters well-fleshed out. I loved that the main character and the main villain are both female. And the special effects were so well done they simply registered as reality. It left me with the expectation of more but didn’t feel truncated at all considering it’s only a portion of the whole story. I haven’t read the books it’s based on yet so I’m only judging it as a film. Two thumbs way up and 5 stars too! Go see it if you haven’t already. Oh yeah, and there’s lots of knitted costumes to ogle in there too.

While we were at the mall buying tea and coffee, we were able to grill the saleslady about our favourite Murchie’s shop. Last I’d heard they were in receivership but they have been bought out and it will be business as usual, at least for now. Yay! I’ve been drinking their tea for over 30 years and have my favourites for which there are no substitutes. I was dreading trying to find something new that I liked nearly as much. The coffee situation is similar for T-Man because most of the commercial coffees are darker roasted than he prefers. I could be wrong, but I think there’s a lot more good coffee out there than good tea. Or at least the kind I like, which is a mixture of black and green. And not in teabags either. I like it loose. Kinda like the way I knit.

What!!! the "magic faries" didn't come by and do all the laundry and housework for you while you were ill. Don't feel bad, they always seem to miss our home too. Glad to hear that you are feeling much better. Take care!

Hit the send button too soon....."Aunties" gloves are lookin' good and I FINALLY got the shawl's knitting all done, now for a bath and block!