Today I decided that it was time to get my hair chopped again. I hates it when it’s more than an inch long! I was questioning myself on why I don’t like longer hair and I figured that it’s just because I can’t be bothered fussing with it. My hair is thick but fine, oily and flyaway. It’s nearly straight and won’t take a curl at all, yet it won’t lie flat either. There’s always something that wants to stick out somewhere. I just don’t want to spend the time or the money for blow-drying, gelling, spraying or colouring. Besides I don’t think all that stuff is particularly good for you or the environment. I just use a wee dab of a simple shampoo while I’m in the shower and that’s it. I don’t even brush my hair, just comb with my fingertips. So now it’s short enough for me and I’m happy again.

Since my hairdresser is only a block and a half from our current favourite lunch restaurant, I invited Milady Daughter out for sushi after my appointment. It was the perfect time to gift her with her new socks that I just finished. Only half a year late for her birthday! 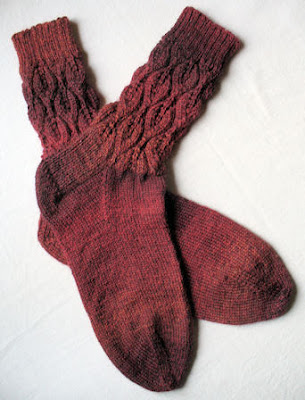 Comments: My version of this pattern is called “Tulip Socks”. I needed to adjust it quite a lot for Milady Daughter’s larger feet. I increased the rev st st areas between motifs to 3 sts wide, making the sock 72sts around. I also knit the patterned legs on 2.25mm needles instead of my usual 2mm. I switched to the smaller needles for the foot. Another few things that I did differently from mine are the legs are 2.5 repeats of the pattern (shorter than the 3 repeats of my first pair) and I stopped the patterning completely at the heel rather than continuing the second half of the pattern repeat on the instep like I did for mine. I thought the lace stitches felt a smidgen too tight at that point and that it would be better in stockinette instead. She loved them!

After yummy lunch she went back to work and I waddled…er, walked briskly up hill home, stopping on the way to buy a few groceries. The sun was playing peek-a-boo with the clouds but the temperature was quite warm. I even saw some little daffodils out already. When I got home I sat for awhile on my deck and perused my new copy of Cloth Paper Scissors magazine that I picked up. While I was there I took this pic of my new and yet unplanted heuchera, Snow Angel: 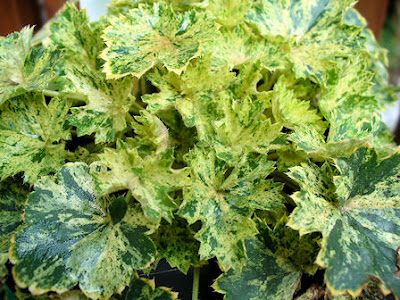 Isn’t that a pretty colour pattern on the leaves? Sometimes I think I like plants with interesting and colourful leaves even better than flowers. Some of the ones I collect in my garden besides heucheras are hostas and coleus, none of which have particularly exciting flowers but many different varieties of leaves. The heucheras have the advantage of being mostly evergreen as well though they do die back somewhat in winter. The hostas completely disappear until spring and the coleus are only annuals unless I can bring clippings into the house and keep them alive over winter. I’m going to have to get Snow Angel planted soon. Currently she’s decorating my table on the upper deck.

The red socks are beautiful! I like both color and pattern.

I wonder though what special skill is required to start something in 2008 and finish it a year in the past like you have here? ;)

Sorry... Couldn't resist the temptation to tease ya. ;)

Fixed the date, Big Red! Thanks for bringing it to my attention. Apparently I'm not great at typing numbers.

I have a collection of heucheras and hosta's as well. Love the socks.