We’ve had days and days of lovely warm sunshine here and it totally feels like spring already. It’s not even March yet! Buds have been popping out all over and I’ve even seen some cherry blossoms (an extra-early variety) though the forsythia isn’t out yet. There’s crocuses blooming and hazel catkins and my euphorbias are putting out new colourful leaves. The flicker is constantly at the feeder chomping down on the suet. It’s hard to keep my feeders filled right now so you can be sure the birds are thinking about nesting. 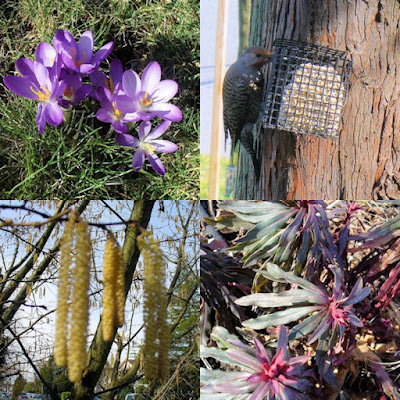 T-Man took advantage of the sunshine corresponding to a weekend (which is rare) and pruned like mad. He finally got rid of the last of the evil hawthorn hedge and now there is more room in the front garden for other things that look nicer and don’t hurt you. We’re trying to assess what needs dividing and/or moving to make a better display. Neither of us is very good at garden design unfortunately. He keeps wanting to make a “plan” and I just laugh. How do you plan when so much is already established? You either have to rip stuff out that might be perfectly good or transplant it somewhere else where it might not do as well. In reality all we can do is work around what’s already there or is more easily shifted. We tend to have single specimens of a lot of things which ends up looking like a jumble instead of planned. But there are places where only certain things will grow such as under the arborvitae and hazelnut trees and directly in front of the house which faces north. It’s tricky! The sunniest part of our yard is in back where the veggie/herb garden is or farther out in front by the street. We’ve steadily been shrinking the lawn area and taking over some of the grassy public boulevard at the side but the trees just keep getting bigger.

Speaking of bigger, I just found out that hazel shrubs can grow as large as 15m! Ours is about 8m high now and has multiple trunks so it’s just about as wide as it is tall. Too bad the squirrels get all the nuts but I guess they figure it’s all theirs since they planted it! Luckily it’s a very pretty addition to the front garden even though the squirrels aren’t. (Nasty things.)

I’m cruising down to the toes of the TulipTwo Socks but that’s about all the knitting or other craft stuff I’ve done recently. I did get the first of my seeds planted in flats under the lights in the basement. And the coleus cuttings — or at least what’s left of them — are transplanted into pots and will spend their days out in the greenhouse while it’s warm enough. I’ll bring them in at night though because they don’t like cold weather at all and the greenhouse isn’t heated except by the sun. I don’t want their bugs to affect any of my new seedlings when they come up.

How do pests find my poor little plants when they are two stories up away from other plants, the windows are closed and I carefully washed the cuttings and the flats and re-sterilized the soil before I planted them? It’s not the kind of magic trick I want to see anyhow. I lost almost half of my cuttings due to soil flies, white fly and aphids. Phooey. Now I know why you can believe in spontaneous life.