I gave myself a blister on the base of my right forefinger attempting to chop up my bucket full of rhubarb roots. 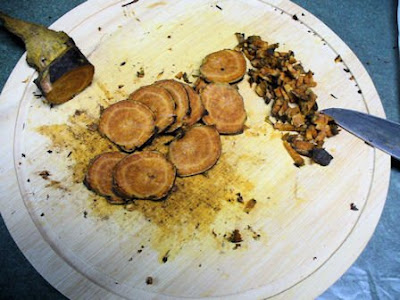 Cutting them is like cutting tough root vegetables, harder than carrots and more like old brown turnips or parsnips. I did about 1/3 of the bucket a couple of days ago and then a bit more each day since with a Band-Aid on my blister. I’ve put what I chopped so far to dry on newspaper and it seems to be drying ok without moulding. 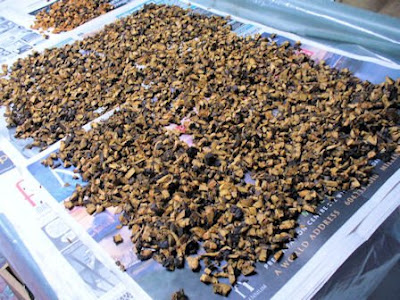 The colour dims a bit from orange to gold as it dries. I hope to use some of it right away for dyeing as I get down into the bottom of the bucket. It’s a good thing I finally started in on them too because when I looked they were already sprouting stems and leaves after a week in the basement! I removed as many sprouts as I could from the rest and put the bucket in the cold room under the front stairs to slow it down. It’s nearly as cold as the refrigerator in there especially during the last week or so. I’ll have to chop up the rest slowly and carefully because my neck is getting sore along with my blistered finger. Plus I need my knife sharpened again.

Interestingly if you google for rhubarb as a dye you get information on using it for hair dye rather than wool or other fibres. I guess people are looking for a more non-toxic and non-chemical means to colour their hair so they’re going back to some of the old ways. The root is not full of oxalic acid like the leaves are so it’s not poisonous. I’ve been wearing disposable gloves while I work with it though or my fingers would be quite yellow by now! Apparently the anthraquinones that give the more russet tones are more prevalent in summer but I have spring roots so that’s what I’m going to use. Also the medicinal variety of rhubarb has more of the dye chemicals in it than the culinary species but I think there is still quite a lot of dye in these very old roots. We’ll see, hey?

I’ve turned the heels on the Sea ‘n’ Sky Socks and finished one gusset. I even worked for awhile this morning on the Hepburn Cardi while I was reading the newspaper. I was feeling a bit tired and lazing around in bed all morning with T-Man was very nice. We did end up walking to the magazine store yesterday even though it was still really cold out and of course it sprinkled on us on the way home. Today we went to get cat food and rent a movie and this time it hailed on us on the way home. It’s supposed to clear up and get warmer during the week but I’m not sure I believe the weather report any more!