April Showers Just Get You Wet

Today is better for my head but not for poor T-Man who spent three hours (and lots of money) at the dentist. I think it’s a good thing to get all our old amalgam fillings replaced and crowns, caps or whatever done before we can’t afford it any more. His extended medical insurance is paying for some of it but apparently our dentists are expensive. But excellent. Sometimes you do get what you pay for. On the upside he gets a day off work!

In a fit of work myself now that I’m not feeling quite so crappy, I got the Sea ‘n’ Sky Socks done. They’re currently drying on the bathroom counter. I need to get an on-the-foot shot because the Synesthesia pattern behaves in a very interesting way and the socks tend to accordion fold up sideways when not being worn. I did remember to take a before-the-bath shot so you can see just how textured it was: 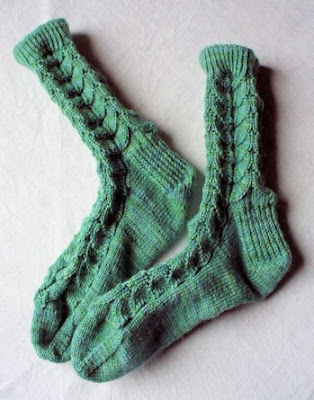 I also found some red wool, an old fine singles weaving yarn from the stash, and knitted up one of the hearts. I stuffed it with brown wool fleece and fulled it as much as I could on my washboard. Because I used finer wool and size 2.75 mm needles (instead of the 9US/5.5mm the pattern called for) it came out nearly half the size at about 2 inches tall. The wool stuffing shrinks somewhat, unlike polyester, and the dark colour doesn’t show through the stitches. You have to stuff fairly fat though or it gets lumpy inside when fulled. Here’s the before and after shots: 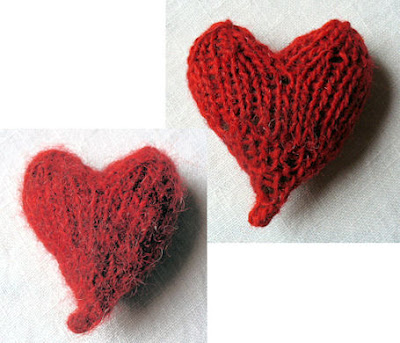 I want to add a beaded hanging loop and some scattered beads stitched over the surface front and back. And then make 7 more for the swap that I’m in. It only took about 45 minutes to knit and stuff the first one and once I’ve gotten the pattern down it will speed up some. I hope the beading goes as quickly. I need to complete one all the way before I continue in a more assembly-line fashion with the rest. But first I have to decide which beads to use!

After all that success, I also finished the second leg of the Unmentionables and attached them together so I can carry on up to the waist. Nice plain knitting for awhile with a few decrease rounds thrown in to keep me awake. This pattern keeps the lacy exciting parts for the end. They’re looking big for The Princess but not too huge. That gives her space to wear them for much longer than if I made them in a smaller size.

I forgot to mention the gift I made for Chris of Joybilee Farm for her donation of woad seeds that she sent me. I used 4 of T-Man’s little blue lampworked beads and made a set of 4 stitch markers, 3 smaller and one slightly larger to serve as the beginning of the row marker. The wire loops and spacers are sterling silver and the keeper loop is hammered copper. I always like to have a keeper to save me from fishing around for my markers. You can even “pin” them to your knitting or inside your knitting bag. I had to go to the postal outlet to mail the envelope because it was too thick with the bubble wrap to go regular letter mail and it had to be hand-cancelled. I took the photo quickly so it isn’t the best quality: 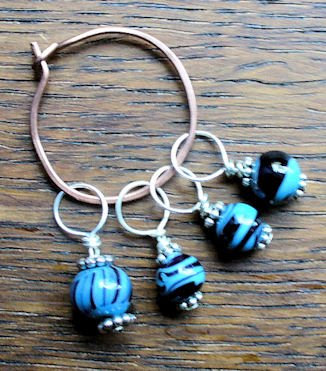 Have I made up yet for not having photos in the last three posts?