“Only put off until tomorrow what you are willing to die having left undone.”

Further thoughts on Friday’s topics brought me to the fact that a lot of the shabby-chic stuff in the house is just waiting for the demise of the furry felines that share the house with us. And catch their many claws in the furniture, toss the contents of the kitchen table on the floor, scratch the carpet on the bottom steps, track kitty litter and cat crunchies everywhere, sleep on our bed and shed black, white and tabby hairs all over everything. (There’s a colour to show up on any item.) I’m sure we human family members are not free of stain when it comes to clean and tidy either. However, we will do our share to clean up the mess that we create unlike our home’s furry inhabitants. We do love the old dears but sometimes they are just pains in the you-know-what. In reprisal, I’m sure they’re going to live forever or at least until T-Man retires and we have to be careful of our finances and so can’t spare any money to replace all the worn out stuff.

Guess it isn’t really a good idea to wait until “someday” to do “something”, is it? Because then you’re wishing your life away and what if that old someday never comes? Surprising how you can put it off for as long as possible anyhow. On that note, we walked down to the new local Home Depot on Friday and ordered an estimate on new carpeting for the main staircase. That rug was old when we moved in 29 years ago! The colour we picked is a soft green called “Willow Tree”. I have a teeny sample piece and I think it will be perfect. Certainly better than the old gold original. We’ll have to keep an eye on the cats, Julie in particular, after the rug is installed. My biggest fear is that it’ll just make everything around it — floor, dining room rug, wrought iron railing, wall paint and all — look even worse than usual so that we’ll be forced to do something about it. Sooner rather than later. Maybe that’s a good thing?

We were talking about putting things off, right? Which reminds me — I hope you all went on over to MagKnits on a regular basis and got some of the lovely free patterns printed out from it because now it’s toast. As in completely gonzo. No archives even. Wave goodbye to its banner in my sidebar. Sniff! Is it true that Ravelry killed it? There was quite the discussion over there! Or was MagKnits killed by a case of Sour Grapes Syndrome? Find out more of the down-and-dirty speculations here. If you can stand it.

Some folks were working on or had queued patterns that they didn’t have archived themselves. At least I’ve always saved a copy of any patterns I immediately liked to my own computer. This includes the infamous Jaywalker socks which I never finished and frogged. (Others have made gazillions of them, making it the most popular pattern ever on MagKnits.) The only one I have in my Ravelry Queue is the Rainbow Socks but luckily I have a copy in Word format. Some people have managed to locate the patterns they need on the Wayback Machine. Unfortunately it has nothing newer than the Aug ’07 issue and all the pictures including charts are unavailable. However, ownership of all patterns have reverted back to the designers which means they will possibly show up somewhere else. Eventually. Gee, would a week or two of warning have killed her? It certainly would have left a better impression. But what do I know. I’m staying on the sidelines on this one. And out of the mud.

So we finally had some very warm spring weather. Just two days. Mustn’t be greedy, eh? But at least it was on a weekend for a change. T-Man and I decided to run away from home on Saturday. We were going to go camping somewhere for the whole weekend but didn’t trust the weather as far as we can kick those clouds. Besides the packing and prep are so much easier when it’s only a day trip. (Am I getting lazy in my old age? No! Don’t answer that!) We wanted to walk on the dike but since there’s a ton of destruction/construction going on around the bridge we couldn’t figure out where to park. So we went bumping along a side road through the blueberry and cranberry farms and found a spot to park near the part of the dike system. It was gorgeous! See? 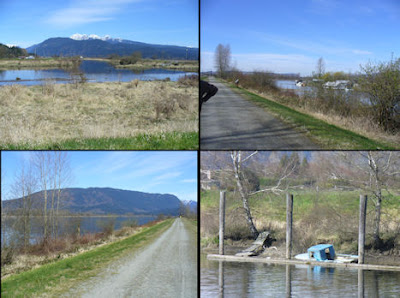 We only walked a portion of it, about 10 km round trip, but we both got a little bit sunburned. I had a hat on which helped somewhat but I guess we’re just not used to that bright light in the sky after so much clouds and rain. Yesterday we spent some time puttering in the garden and I finally got my peas planted. Now I have to put nets up to protect them from the birds who take bites out of the leaves as they come up. That’s what I get for having a bird feeder, hey? Ingrates!

I also made it to the Ravelry meet-up yesterday and had a lovely time visiting with everyone. We were 6 this time, a respectable number. Knitting for a couple of hours with friends makes a nice break from digging weeds and planting stones in my pathways. (No, I’m not expecting the stones to grow.) Oh, and hon’, I haven’t forgotten your question on podcasts. I’ll do an in-depth about that tomorrow for you, OK?

Yes it was a lovely weekend! I had to work for most of it though. It IS too bad about MagKnits. I didn't go there often but it's sad there wasn't some warning. And there'll always be sour pusses yapping nonsense just for the sake of yapping. I have a couple of patterns but my loyalty has always been with Knitty.

Your holiday spot is where my Dad drives to almost every day to go for his walks! It's beautiful out there...
He takes his camera with him and I'll send you one of his stellar shots :)

Hey, Louisa, we hang onto stuff forever also, and have an ancient cat who spends all his time making stains as well. I just got a spotbot which is GREAT at cleaning up after him. We haven't dared to replace carpet yet but this makes me think it might be possible.