I really shouldn’t have complained about the weather because after an extra-lovely Saturday we’re now back to rain. At least it’s warmer than it has been! We took advantage of the nice day though and went for a very long walk downtown over the Granville Street bridge and home again over the Cambie Bridge. T-Man wanted some jeans that were on sale at Sears and since he never buys clothes if he can help it, we zipped in and did a quick purchase of 2 pairs and then ran out again. I hate it that you can’t get into a department store without going through the “stinkies” section with all the perfumes and cosmetics. I can taste it afterwards even when I hold my breath or when I can’t hold my breath any longer, breathe through my mouth. Bleh.

There weren’t any new magazines available so we didn’t buy anything else except lunch (sushi!) and two 2GB SD cards for my camera and his Palm. They were only $40 for the pair which is so much cheaper than the last single 1GB that I bought for $50! That’s 1/5th the cost per GB. Prices keep coming down as equipment needs more memory. SD cards are pretty little so you have to be careful not to lose them somewhere! That would be a tragedy especially if it was full of photos or something. I have a little case that holds one card but even it is pretty small.

Yesterday we went to the garden shop and bought a few little things, like sea soil and potting soil and a couple of wicker trellis screens for the clematis. I also got some more seed starter mix because, yes, I need to start some more seeds. Several of the ones I did already are not doing well because of the cold weather even though their pots were in the greenhouse. I need to start over with broccoli and lettuce and some other things.

Then I went Raveling and we had quite a group! There were 9 of us plus baby boy and we took up one whole corner of the back room. Very fun chatting and show-and-telling. It’s a very eclectic and amiable bunch. Pleases me no end to admit that most of us met first online. (Though there are a couple of my old spinning students represented too.) If we get much larger we’ll have to rent a hall or something! Actually, depending on whether there’s students studying or not, there’s usually plenty of room for a good-sized gathering in The Grind’s back room. The drawback is that it’s somewhat dark and stuffy with no windows back there. We’ve started planning for a field trip to Richmond’s little village of Steveston to check out Wool & Wicker’s new expanded shop. At least now more than 4 of us may be able to fit in at the same time. Fish & chips may also be on the agenda. Can’t hardly wait until June.

So after the Ravelry meet-up we did our usual pilgrimage to Three Bags Full. A skein of Louet’s Euroflax linen jumped into my hand and wouldn’t go back on the shelf. I had to buy it or be accused of stealing. Heh. The colour is called Gypsy Bronze and although there is no brown in it, it optically blends to brown from a little distance. There’s one ply each of gold, red and 2 dark greys: one slightly greenish and one purplish. This photo is fairly accurate: 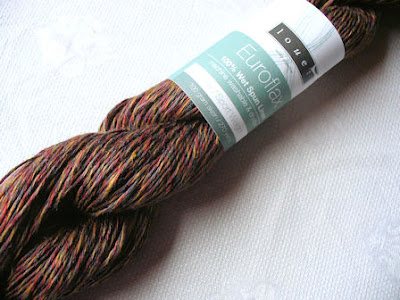 I want to make a skinny lace scarf out of it. It will go nicely with my Hepburn Cardi which is now past the armhole decreases on the fronts and heading for the neckline decreases. These are the last pieces to complete and then it’s on to blocking, assembly and borders to pick up and knit — the finishing process. This uses all my dressmaking skills to get the seams smooth and as invisible as possible. A good job makes a garment look professional so it’s worth doing right. So many knitters get stuck at this stage because they don’t like to sew. And that’s probably why seamless sweaters are so popular when there’s no making up to do. I would have done the back and fronts in one large piece myself but that would be too many stitches on my circular needle and too heavy for me to manage easily. This lace and cables pattern is quite dense and complex which may be the reason it has taken me since last July to get this far! I knit very slowly. The only reason I get so much done is persistence not speed.

I’m partway through the lace edging on the last ruffle of the Unmentionables. Nearly there! A comment was made by a friend about the sense in knitting such a time-consuming (and expensive) item for a little girl who may not even wear it. I hear ya. All I can say is that I’m a doting grandmother. What else are we for except to spoil our grandkids? I’m pretty sure she’ll love it though. After all it’s peeeennnnkkkk! And all princesses need their bloomers on under their elegant skirts, no? Otherwise it would be difficult to run around and play outdoors and be warm and comfortable! They work on their own for warmer weather too. Much more girly than shorts. She might need some convincing to leave off the skirt though. That’s the garment du jour and other clothing items are just tolerated under or over.

I wanted to show the carpet replacement that happened on Friday. When I think about how long the old one lasted, I’m pretty impressed. The new one is only guaranteed for 10 years but we lived with the old one for nearly 30 and it wasn’t new when we moved in. I always thought we would replace it sooner but never got around to it. Just another example of my “use it until it’s absolutely unsightly or completely broken” philosophy! Apart from vacuuming, I don’t think I did anything else to it all those years except scrub off the occasional stain. Out with the old: 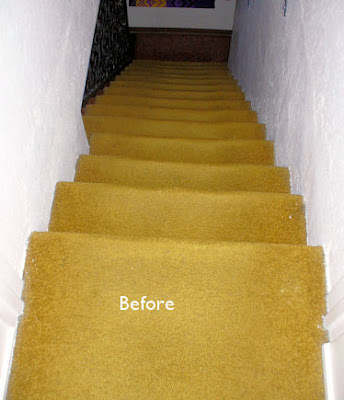 And in with the new: 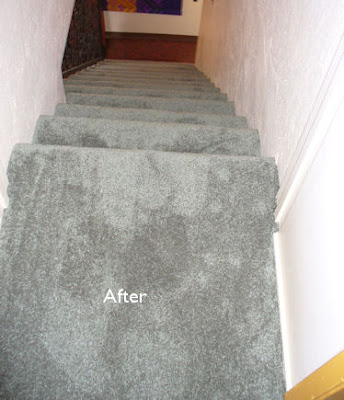 This carpet is very thick in comparison and is good quality polyester. It really muffles the sounds of walking up and down. But it felt awkwardly poofy and bouncy for awhile until I started to get used to it underfoot. It’s already been slept on by Ms Julie cat who has decided she likes how soft and warm the spot at the top of the landing is. As long as she keeps her 24 claws sheathed she can indulge herself all she wants. I really like the soft green Willow Tree colour which blends better with our décor, such as it is. Totally worth the nearly $900 it cost, a good chunk of that for the Turkish guys’ labour. Another thing checked off the “House List”. Next up is the bathroom. Mould isn’t such a nice colour for ceilings.