Following In Her Daughter's Big Footsteps 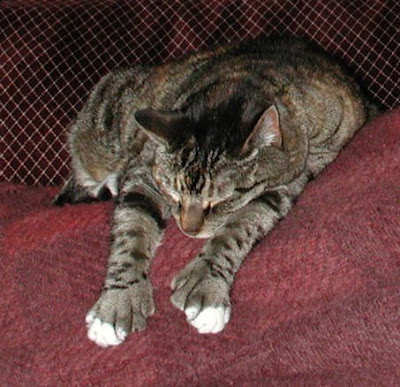 Ms Polly Manytoes
1988-2008
I guess she didn’t want to live without Julie, huh? In the last two weeks since her daughter died, Polly has been going downhill very quickly. We just left her at our vet’s for the final time. She wasn’t eating or drinking and there wasn’t really much he could do except perhaps prolong her life for a short while. Why? She lived a long and happy life with us. No need to force her to stay.

Nineteen years ago we had just recently lost our cat Nicky to feline leukemia when T-Man’s mom mentioned that there was a cute young cat in her neighbourhood that she thought was a stray. Of course, next time we were over visiting mom, this tabby cat with huge feet showed up for a snack so T made a snap decision and we brought her home with us. We took her to our vet (the same kind man we left her with today) and he checked her out for health. He said we should keep her for a few weeks just to make sure she was fitting in to our family and then bring her back soon to have her spayed. We watched her putting on weight, thinking she was responding nicely to her new home, but we soon realized she was pregnant! She must have just got knocked up before we brought her home because even the vet never noticed anything that first time he saw her. Later she had her five kittens in the middle of our kitchen floor even though I had made her a nice comfy bed. Watching her give birth made me grateful that I only had one baby at a time!

Polly was such a love-sponge. Never got enough of it and went begging to anyone for more! We’ll really miss her always soliciting pats and having her snuggle on our laps. Her double “thumbs” made it easy to grab my hand between her paws which could be particularly awkward if that hand had a cup of tea in it. Her only other annoying trait was sitting on the stairs where you could trip over her and not moving out of the way. Aside from that, Polly was always gentle and never bit or scratched, just like Julie was. But unlike most other cats (including her own offspring) she didn’t like catnip (but loved honeysuckle) and didn’t like canned salmon or tuna or freshly cooked chicken or turkey. She would only eat her cat crunchies and the bit of cream in the bottom of my cereal bowl and perhaps the occasional kitty treat.

Losing both of our cats in just over two weeks has been pretty stressful on both of us. Still we remain adamant that they will be the last pets — at least for the foreseeable future. All I’ve got to say is that it’s a good thing I’m weaving a blanket. I’m definitely going to need the extra warmth this winter when I can’t pull up another cat.

Louise and Thom - I'm sorry for your loss. When we were over there yesterday poor Polly had such a hard time just moving from one spot to another just a few inches away. While we were sitting on your back deck I saw her move several times...every time closer to you Louisa. And then one gigantic effort to find the patch of sunshine in your dining room. She had a long life in which she was well loved, as you were by her.

My heart is very sad to hear that Polly is gone. My sympathies to you and your family.

Oh Louisa I'm sorry. You gave her a good long life and did the compassionate thing by letting her go when it was time.

Oh Damselfy... I'm so sorry that you have lost another friend.
May their memories comfort you..

That's such a shame - I am glad you have happy memories to remember her by.