I’ve finished the Big Secret Project! Whoo-hoo!! Three days to go until the wedding so not bad time-wise. I’m pretty sure they will appreciate this rather mundane prezzie considering how much work goes into making something by hand as opposed to just going into a store, looking up their gift registry and purchasing something from it. (Though I have to admit, that makes it easy for those who are less stubborn than I am! Heh.) I’ll post the details sometime after Saturday. Another thing off my never-ending list and now my loom is bare again. I’m pondering putting on another warp since I have tonnes o’yarn left in the stash. But what to weave? Maybe some table coverings for the kitchen table? I’ve been wanting something specific for a long time. Something like one large thick placemat that covers the whole table surface (which is quite small) but doesn’t extend further as opposed to a tablecloth (lighter weight fabric that drapes over the edges). I will have to ponder this one for awhile.

Meanwhile, I’m on the gussets of the Ocean Blues Socks and no further on the A-Maizing Socks which are in time-out again. I want to get the Secret Project notes done up before I forget everything but I can’t take photos until it brightens up some because this morning’s gloom makes for lousy pictures. It’s supposed to improve but they’ve been saying that for two days now. The high is apparently not moving in from the ocean very quickly because it’s not as strong as the weather folks had hoped yet. It sure needs to warm up around here! I wore three layers including my Gore-Tex to the store yesterday and was wishing for more plus gloves and a hat. This is nearly summer here, people. I would like to see some evidence of this asap.

So while we’re waiting for sunshine, I’ll review two of the crochet books I got recently. Yes, I’ve been buying crochet books instead of knit ones. There’s a lot more to be said about crochet really, if you think about it. There are many more stitches and more ways to manipulate them than in knitting. You are much more free to go off in all directions! Because of all the variations, it’s also harder to describe how to make something in crochet. Even charts have their limitations when things start to go 3D. There have been a number of new books just out or coming out shortly that add to the crochet stitch library of patterns and techniques which are important for those of us who like to forge ahead without a complete designer pattern to follow.

The first one is Stitch Collection: Textured Crochet by Helen Jordan. 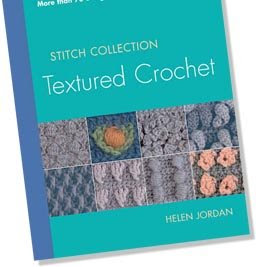 Subtitled “More than 70 Designs with Easy-to-Follow Charts” doesn’t really describe what goodies are hiding in this little book. First of all, the author starts with beginner crochet information including step-by-step illustrations of the basic stitches. It’s a good refresher if you’ve forgotten anything. Although the author is from the UK, the instructions have been completely “translated” into North American crochet terms in this version of her book. She has also used both written and charted instructions for each stitch pattern. This is great if you are a bit shaky on exactly what is meant by the symbols, since several are possibly unique to this book. The reason for the unique symbols are necessary because Helen doesn’t just show you a pattern, say for puffs, but also takes that basic idea and travels with it. In subsequent patterns, the puffs will be larger or smaller, staggered, repeated closer or farther apart. Another section on half-double crochet plays with the stitch’s three horizontal loops by exploiting the possibilities of working into the front, back or top of the stitch. You get the idea. That’s the biggest strength of this book: the “what if” playing that takes basic stitches and pushes them to see where they will go. The way the stitch collections are arranged helps to show that progression of thought and experimentation also. I find it very inspiring!

The design of Textured Crochet’s US version of the book is very interesting also. It’s a relatively small size but it has a covered ring-bound spine which stays open when you’re working from it. It has excellent organization which includes a narrow column on the far right of each right-hand page that reminds you of the symbol key for those two pages. It also has a complete symbol key at the back of the book with an at-a-glance abbreviation and key page that can be left folded out from the book to help you as you work on any other page. Very thoughtful. The only drawbacks that I can see to this lovely little book are related to its size. The format is small at 6” wide x 8” tall and a lot is packed in so the type and charts are necessarily also very small. The charts are coloured to match the swatch, making it easy to see where the changes are made but it can be a little difficult to differentiate the symbols where the colours are lighter in tone. Good light is essential while reading this book and perhaps a magnifier of some sort would be helpful if you have vision problems. The photos, though also in keeping with the book’s diminutive size, are nonetheless clear and you can see the stitches well. Importantly there is a one-page index at the very back of the book to help in finding exactly the information you need quickly. 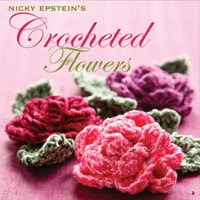 I love Nicky’s collections of motifs and edgings so this one had to go onto my shelf beside them. Though I’m really waiting for her upcoming Crocheting On The Edge which is a crochet version of her popular Knitting On/Over/Beyond The Edge series, I thought this would be good company to her Knitted Flowers book. As you might guess, it’s very similar to it’s knitting sibling and includes lots of three-dimensional flowers, some with beads, some felted, and some cut and stitched from crocheted and felted fabric. I personally think crochet lends itself even better than knitting to these types of multi-layered motifs because you can work around, attach, increase and work into stitches on all angles so easily. However, a knitted fabric might be better for the felting and cutting technique since it has less holes and the cut edges look nicer. Though I suppose this idea is useful if you can only crochet and aren’t interested in learning to knit.

Like the first book I reviewed, this one also has small type and small coloured charts. Unlike the first book though, there is a lot of white (or coloured) space where the type and charts could have been expanded into. The photos are large though they do get a little “artsy” and on a couple of pages, one or more of the flowers are completely out of focus. I want to see the details please. Artsy is all fine and dandy but not at the expense of the important details that I’m trying to re-create. The symbol key and abbreviations are at the front of the book and there is no index.

The disappointment in this book for me are the patterns for finished items that are included. The earflap hat looks like the one I made (was it last year?) but mine wisely isn’t wreathed in flowers! The handbag is ok if you like that overly ornate shape but the belted shawl is just ho-hum mesh with a flowered “collar”. The floral necklette is an over-the-top but quite fun piece though I don’t think most of us would wear it. The bridal bouquet is lovely (and indestructible!) but the crossed bands of roses on the back of the wedding dress are too much. I think they would have looked better with the roses only going over the shoulders rather than right to the waist adding a lot of bulk where her arms fall. Continuing with the wedding theme, the trio of cheap paper lanterns covered in doilies seem to me to be out of place as far as scale and modern style goes. There’s more but if you really are into crocheting flowers, the Parisienne Scarf is definitely for you with it’s 4 rows of colourful mostly flat and some dimensional flower motifs stitched together. Maybe one or two rows would be less overwhelming? It just feels to me that Nicky was reaching pretty far into the barrel to come up with ways to use her crocheted flowers. Perhaps she’s published so many books in the last few years that the barrel needs replenishing? Anyway I’d be happier if she didn’t even try to include these — just stick with the motifs themselves and let the readers use their imagination on how to use them.

Obviously I’ve been enjoying the shift in popularity and respect that crochet has seen recently. It’s finally working its way out from the “afghans and bazaar items” category that some people have shoved it into. If you realize that crochet hasn’t been around as long as knitting (at least as far as we can ascertain) and that it still has a lot of untapped potential, we can hope for some great things to come from designers in the near future. I would do more of it myself except that it is much harder on my right wrist than knitting so I have to be careful not to do damage. And there are some things like socks that are much better knitted than crocheted. However the advantage of crochet’s superior speed is not to be underestimated. I guess we’ll see where Damselfly’s wings take her. Sometimes even I don’t know for sure.