Well, That Was Fun

Sorry if I sound a little sarcastic here — I just frogged the whole cuff of the second Peeenk Cardi sleeve because there was a split stitch in the cast-on that I hadn’t noticed and couldn’t repair. The cuff of a sweater is a vulnerable spot where lots of wear happens so I didn’t want to fudge something that wouldn’t hold up. It’s also an area that you can see clearly so any fudge will show like a neon sign. Finnegan-BeginAgain.

What was actually fun was Stargazer’s 1.5-year birthday party yesterday. I’m usually very laid back about most things but I find myself a bit at odds with the concept of skipping right over a late December birthday just to have it in summer where it doesn’t conflict with the Christmas Holiday kafuffle. Maybe because the vast majority of my birth sibs were all born in December, including my brother who actually shares a birthday with Stargazer, so it’s not such a big deal? However, good thing was that he was old enough to actually understand that the toys he received were his and his excitement was so cute to watch! With a sucker firmly in his mouth he helped unwrap: 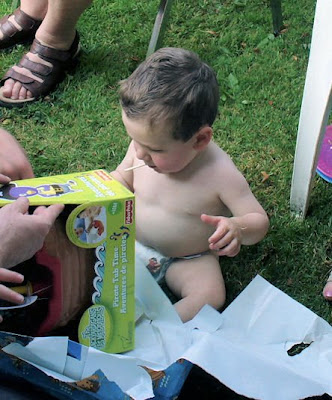 Another advantage was that we could have the party out in their backyard. Instead of freezing, the weather was stinkin’ hot! I’m trying not to complain. Much. I slept better last night in any case. Perhaps I was just really tired from the lousy night I had on Saturday combined with many hours of gardening over the last few days. An Advil for the sore joints helped I’m sure.

Today it’s somewhat overcast but still very warm. Maybe I won’t have to spend half the day watering the garden! In this hot weather if you miss something it wilts immediately as I found out last night after returning from the birthday party. One of my planters was totally limp so I threw some water on it before heading for bed and it seems ok this morning. Some of my planters have “container mix” in them and it’s a really wonderful solution. There are little water-retaining gel crystals in it that keep it moist far longer than usual. I think I’ll try topdressing the limp one with some of that stuff (if I have any left) and see if it helps.

Meanwhile, back at the fibre crafts — besides beginning the Peeenk Cardi’s second sleeve over again, I have the body and one sleeve done and joined. After the second sleeve is done I can join it on too and continue upwards on the eyelet yoke. So far my re-jigged pattern is working out pretty well with just a few small re-re-jigs to get it just right. All this work for a grumpy Princess Pink who wasn’t even speaking to me at the half-birthday party! (Probably because she wasn’t getting all the presents.) And Stargazer paid no attention to his sweater and socks set that I gave him because of course all the toys he got were far more fun. However his dad The Ninja immediately recognised the Peter Rabbit buttons that I used on the shoulder and neck as the ones from his own childhood which was gratifying. His mom liked the self-patterning sock yarn I used and said that it should fit him well by this Fall when it gets cool enough to need the extra warmth. Otherwise it seemed rather strange to give a sweater and socks to a kid wearing nothing but a diaper because he was too hot!

I’m taking it somewhat easy today after the last several marathon gardening days. I don’t really enjoy working in high heat and it’s already 24 C. even with the clouds. I’m used to a very moderate maritime climate so those who actually get Real Summer will think I’m a wimp. But I yam what I yam, as Popeye would say. After getting the second sleeve on the way again (and a bit of blog reading in) I think I’ll work in my studio with my big fan directed on me and see if I can get to finishing the Circus Blanket.