I never realized how traumatic getting a new roof would be, both for us and for our house. The drywalling up here on the top floor is amateur at best (no it wasn’t us!) but this is some of what happened yesterday after loading all the supplies on the roof peak: 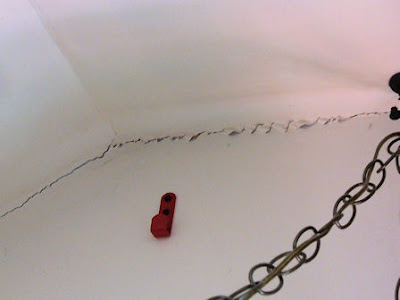 There are quite a few of these splits where the mudding and taping cracked away, most of them not as bad as this one. So we’ll probably end up having to do some repair and repainting. Sigh. I wasn’t planning on having to do this right now. Of course since it’s in my studio, I’m the only one likely to see it so I can always ignore it until I feel more in the mood to tackle the repairs. Of course the company has tentatively volunteered to repair it but I think it would be easier in the long run to do it ourselves. I’m sure we could do a better job than the original one, that’s for sure. 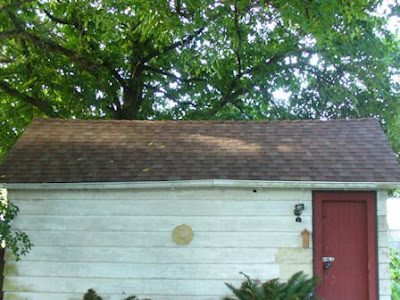 Big improvement. And yes, it does have a definite swayback. It’s over 70 years old after all. (So does my house. And it’s probably worse now than it was too!) Now to replace the eves troughs, finish stripping and paint the walls. The door is going to be violet-blue instead of red. The big door will be blue too, with red and brown trim and white walls.

It’s very windy today and the guys are having troubles up on the house roof. Their tarps won’t stay put and everything is blowing around. Yes, they have harnesses on. And hardhats. There is a safety guy that comes around and checks if they don’t play by the rules. And another couple of guys that check on their work. And yet another guy who makes sure we’re happy with the job. They are very competent and friendly but I’ve discovered it is rather stressful having people banging and stomping over your head all day. And I thought it was bad when it was all happening next door! Now I know why T-Man went to work today after working from home yesterday. They should be done by Monday or so anyway.