When you have an enjoyable garden, big trees to provide cool shade and a double-layer deck with a pleasantly tinkling water feature, why ever would you go on vacation in the summer? The roads and ferries are too crazy, the beach resorts and parks hot and crowded, and it’s just not fun — at least for me. Without the restriction of having children in school, we can go away in September when the weather is usually nice but cool at night for sleeping and the roads and campsites are much less busy. I adore traveling in the late summer even though the evenings aren’t as long. We’re planning on heading out down the coast to California this year. Maybe we’ll even get further south than San Francisco for once. (And maybe all the fires will have subsided.) Meanwhile, I’m enjoying bringing my fibre work out on the deck and puttering in the garden. I also have plans to start on the bathroom which is in dire need of painting. We’ll see how far I can get on that without T-Man’s help.

Today though I’ve promised to look after the grandkids while their parents go to the dentist. I need to vacuum but that would be pointless until they leave so I’ll just run the dry Swiffer around to pick up the wood chips that T dragged in on his clothes after running the mulcher/chipper. His t-shirt retained an interesting smell from the gas that totally reminded me of when he worked at a service station (while going to college full-time) when we were first married. It’s funny that smell reminds me of our youth and is almost romantic! Yeah, that’s weird, I know. Shut up.

I got 1/4 of the way around the Circus Blanket with the Pointy Edging that I unvented. Here’s the cute double-pointed corner: 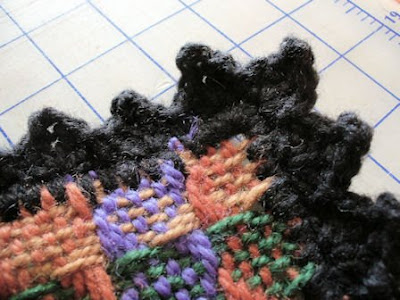 And here’s my first clip-on stitch marker holding my last stitch from unraveling: 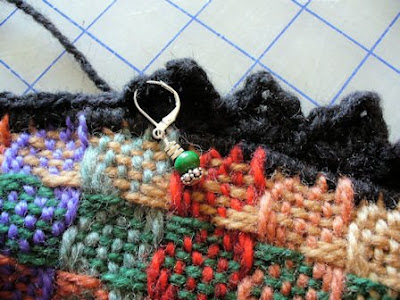 Yes, it does resemble an earring but it’s not! That little green bead is one of T-Man’s lampwork beads, just for fun. I still have to make more of these markers but I’m obsessed with finishing the crochet on the blanket above all else. I fear I’m going to run out of the black yarn somewhere in the last quarter of the distance but I have a skein of the same yarn in blue-grey that I can overdye to match close enough if I have to. I won’t dye it until I see if I actually run out first though. It’s a pretty colour that I’d like to use for something else if I can. You know how it is when you’re about to run out of yarn. You work faster and faster as if that will help stretch the yarn to complete the piece! Either that or you just want the bad news quickly so you have more time to decide what to do about the shortfall. In my case I just want to finish the darn thing! There are only 19 days to go before its first birthday which is my self-imposed deadline.

In other news, the poor VW van got it’s left mirror broken by a gardener’s truck yesterday morning. The perpetrator actually kindly left his card with our across-the-street neighbour but hasn’t returned T’s call yet. It’s only the mirror that’s broken so hopefully it shouldn’t be too difficult or expensive to repair. When a vehicle is nearly 20 years old it gets rather tricky to fix it sometimes because specialized parts are rare and at a premium. If they’re available at all. T says that he treats our van like an airplane —replacing parts as they wear out and keeping her in the best running order possible. There is nothing new out there that’s enough like it to replace her with. She hasn’t even depreciated all that far even though she’s so elderly. And we loves our Fraulein Blau (Miss Blue). Even if cheeky Velvet the MINI Cooper usurped the garage.

Nahh, that's not weird! My Hub worked as a locomotive engineer and the smell of desiel has the same effect on me. :)
Reminds me of all the train rides he and I took together.

Smell is one of our most powerful senses...