I’ve been listening to the flickers drumming incessantly on the telephone poles. They are calling their mates and defending their territory and especially like to drum on the metal caps at the top of the poles where it creates a much louder noise that you can hear a block away. I don’t remember them breeding around here in quite such numbers before so I’m trying hard not to be annoyed with the racket. They are beautiful birds and I love their different calls.

So we had our Spectrum meeting yesterday on the deck. In spite of the fact that a few were a bit chilly, it didn’t rain and the sun actually peeped out just as everyone was leaving. I of course was toasty warm under part of my 4 kilos of wool blanket and got the last seam stitched up and half the knots retied in the time I had. I did offer to cover up the cold folks with it but it would have meant rearranging our seating which would be awkward for working on everyone’s current projects. I ended up lending out my wool and cashmere shawl instead.

Later T-Man and I walked down to Granville Island and I got some supplies from the bead shop for moveable stitch markers. They had some round lever-back earring hooks in silver colour: 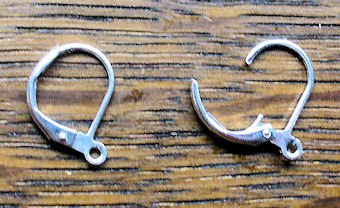 I’ve never seen this earring shape before and I think it’s just perfect for this type of stitch marker. They are useful mostly for crochet because unlike knitting there is no place to leave a ring between stitches. With a clip-on stitch marker you can hook it into a stitch and then when you come to it again, unclip and move it to the next stitch to be marked. This ability might also come in handy occasionally in knitting where you want to leave a marker in but still allow it to be removed later. Now I just have to find the perfect beads to decorate them with. Of course I also bought some matching eyepins for the beads. Plus some larger split rings to make regular stitch markers since most of the ones I have are quite small and don’t fit on the larger needle sizes. I got them in both silver-coloured and blackened metal so I can have several sets. I’ll be practicing my wire wrapped loops with all these!

The gallery opening was fun and we chatted, nibbled, sipped wine and looked at the wonderful clothing and jewelry on display. T-Man threatened to eat the poor silkworms dipped in hummus but we discouraged him. The Silk Weaving Studio are raising several very small groups of silkworms and they are very interesting to view munching away on their mulberry leaves. The tiniest ones are less than a centimeter long but there were large fat ones which were the ones T was eyeballing jokingly. The walk home was rather a marathon though since we took a longer way along the seawall east through where they’re building the Olympic Village for 2010. There was a finished seawall section with sculptural seating and plants and even a new pedestrian bridge but none of the buildings are completed yet so it was all blocked off from the walkway with tall fencing. The fencing directed us a couple of blocks out of our way and after that it was all a steep uphill slog (and well past our bedtime) when we finally staggered home. It was fun though to see all the changes going on by False Creek.

This morning I finished sewing the button on the Peeenk Cardi, which is still a bit damp 36 hours after its bath due to the rather humid weather we’ve been having. So here it is:

The Peenk Cardi
for Princess Pink 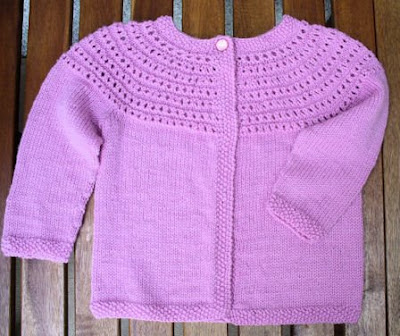 Comments: My pattern re-jigging worked out pretty well, if I do say so myself. The circular construction worked fine and it wasn’t nearly as difficult as I thought it might be to join the parts before working the yoke. I got 7 rows of eyelets instead of only 5 with the finer yarn and I think it looks more delicate. As usual this sweater will be large on the recipient but that gives her lots of growing space. However it might have been better with 3 buttons rather than only one.

OK, I’m off to do a huge pile of dishes from our potluck lunch yesterday, water the whole garden, make the bed and finish 4 loads of laundry. Maybe I’ll get a chance to get started on the crocheted edging for the Circus Blanket. Or not. That chore list looks rather long.

what a lovely cardi :)

Thank you so much for your kind comment! The colour was chosen by my granddaughter so she had better like the sweater. I haven't had a chance to give it to her yet.

Sorry to hear about all the "excitement" you've been having with poor Magnus. Glad he's doing better now!