Move It Or Lose It

This morning I absentmindedly left a little of my cereal cream in the bottom of my bowl the way I used to share my breakfast with the cats. I suddenly noticed what I’d done, drank it up and laughed at myself. Old habits sure die hard, eh? A toast to you, my furry dears. And no, I’m not planning on getting another pet of any sort any time soon. Just in case you were wondering. If I’d wanted to, I could have had Auntie90’s cat if she hadn’t been quickly and unceremoniously taken to the animal shelter. Hopefully she’ll find a happy new home. Meanwhile everyone is trying to avoid telling Auntie anything except that her cat is being taken care of. Just like Auntie herself.

So today I must finish the vacuuming that I’ve been putting off for weeks. The count of dead flies on the livingroom windowsill is mounting. It’s starting to gross me out! And because it keeps raining every time I want to go outdoors (it’s fine while I’m inside, blue sky patches even) I can’t work in the garden so I have no more excuses. The rain is a nice change and is saving me from standing around watering the garden, but I was hoping to get the front railing stained to match the back deck. T-Man pressure-washed it off for me last evening but since then it’s been wet. We should have done it days ago when it was still dry out. Darn.

T-Man too is frustrated by the rain and the fact that he’s had to spend so much time at Auntie’s with his mom finishing up the sorting and packing. He wants to paint the garage now that he’s got it all scraped and sanded and preferably finished before we go away. Who knows if the weather will be cooperative when we get back since we’ll be into Fall by then. This has been a very busy year at Chez Damselfly. And we didn’t get even half of what we wanted to done. There’s still fixing the falling-over back fence, painting the bathroom, cleaning out the cold room and under the basement stairs and painting the rest of the basement floor under there. Later. All these things have waited for years and can continue to wait for a few more if necessary.

I’m actually quite pleased at my stamina anyway. For a man with a pretty sedentary job, T has always been able to become a Weekend Warrior and work hard when he’s home with no ill effects except a few slightly stiff muscles. But I’ve had a number of physical problems over the years with my wrists and neck so I’ve been limited in how much I can accomplish without consequences. It seems that now I’ve got much of my strength back and haven’t been too uncomfortable at all even though I’ve been pacing T with the work. This is so gratifying! I might look like somebody’s granny but I’m more fit than many my age. Just don’t expect me to take up extreme sports or anything. I do have my limitations.

Speaking of which, have you noticed how some people will pay for a gym membership but also pay to have their yard work done? What’s up with that? My across-the-street neighbours are like that. She has some kind of fitness classes at her house but they have a service mow their small lawn. You can’t even get by the back yard because the public sidewalk is overgrown with their shrubs and trees that never get pruned. Squelchy wild plums all over the ground and falling on your head as you pass. Ick. They’ve been there for a number of years but I still have no idea what her husband does. Not much apparently. I guess because they’re renting they don’t feel that upkeep is their problem. My neighbours three doors down are the same though their shrubbery is more under control. I could understand if they were older or infirm but they aren’t. They’re relatively young and have children. What kind of example are they setting for them? I learned to enjoy gardening by helping my father as a young child. He paid me 10 cents an hour to weed! To this day I can’t see gladiolas, dahlias or sweet peas without thinking of him. Curiously I don’t have any of those in my own garden. My priorities are different.

My other across-the-street neighbour whom I’ve known for nearly 30 years also has a gardening service. She’s a widow in her 60’s and used to get her son, in his late 20’s and still living with her, to mow. He decided that he’d rather pay the cost himself for someone else to do it. His excuse was that he has more money than time available. So we’re starting to feel like the neighbourhood weirdoes, out there working in the yard all the time. Gratifyingly we do get many comments on how nice things look but we really do it because we enjoy it. After all, we too could hire a service if we wanted! But we don’t. Besides, mowing the lawn is the least of it. You can’t get someone to manage your veggie garden without it costing way more than the veggies are worth. And what about my dye plants? Who would pick the blueberries? Oh, right. Other people don’t have those things anyhow unless they like gardening. They just have lawn and low-maintenance shrubs and trees. What lost potential!

A 2005 report from Statistics Canada, Physical Activity Among Canadians: The Current Situation:

Relatively few young adults site gardening as an activity compared with other groups. Participation in gardening gradually increases during middle age and is most popular among 45 to 64 year old adults, where it then decreases somewhat among older adults.

Some stats from the National Gardening Association (US):

Fewer than half of all households did their own lawn care last year, and even fewer have a flower garden (36%) or a vegetable garden (22%).

A research project in Australia, entitled “The Congruent Garden: an Investigation into the Role of the Domestic Garden in Satisfying Fundamental Human Needs,” interviewed gardeners on the values of gardening in their everyday lives. The researcher, Mike Steven, established that gardens have the potential to satisfy nine basic human needs (subsistence, protection, affection, understanding, participation, leisure, creation, identity, freedom) across four existential states (being, having, doing and interacting.)
— Mike Steven, Lecturer in Landscape Studies, University of Western Sydney, Australia

So ‘splain to me why more folks aren’t enjoying their own yards? My kids are finally putting some of what we taught them into good use now that they own their own yards. Even my 80-year-old mother-in-law gardens, though she wisely has a service cut her lawn and prune her larger trees. Her flowers are lovely and give her a lot of satisfaction. She does complain about the weeds — don’t we all! I’ll leave you with my veggie garden after the rains: 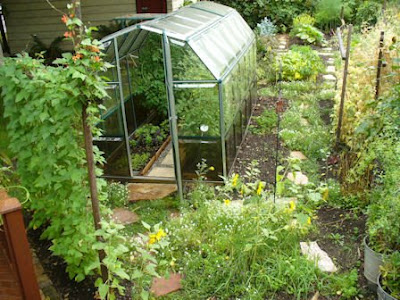 Yesterday I picked a freezer bag full of blueberries, 2 bags of blackberries, and a 3-liter bucket full of summer squash, beans, broccoli, tomatoes, basil and even a few peas still. (Though the vines are really toast, see them on the right top there?) Yummy!

Here's a young renter who has longed to garden more than she was allowed in low-maintenance landlord yards--ugly shrubs and sacrosanct plastic weed guard and cedar chips. So, I don't understand it either. Maybe it's a bit like the way people will plop down in front whatever's on TV rather than picking out a video. The gym is simple.

I think you're right that it has to do with upbringing. People don't really understand what it means to have plant life right outside their door can go and enjoy/participate in; it's never been a part of their lives so they have no idea what they're missing.

Poor Auntie's cat. Some cats get stuck in the animal shelters 'cos there aren't enough homes, especially as people want kittens. I hope someone will give her a home. I have a new cat that had waited 5 months for a new home, the poor darling behaves like she just got out of jail.