The downside of coming home after such a long trip (the longest we’ve ever taken) is the catching up. There were piles of mail and newspapers, email and unread blogs, magazines and books that I bought while we were away, gardening and housework, plus family commitments to catch up on. I’m nowhere near caught up yet.

The weather promises to be sunny and unseasonably warm today so unless the grandkids show up later, I’ll be able to get some of the winterizing prep done in the garden. There’s still a few things left (tomatoes, onions, broccoli, greenhouse greens) and some that stay in all winter (parsley, leeks, Egyptian onions, purple broccoli) but the rest can come out. Then we can plant the fall rye that keeps the garden from washing away in the winter rains. I was really happy with the stones we put in the pathways. Not only did it make it much easier to get around the garden but it didn’t encourage the evil sowbugs and pillbugs to proliferate like the mulch we used to use. The stones might even help to warm the beds by radiating some residual heat from the sun. We could use a few more stones to complete the paths better but we can add them at any time in future.

I finished and blocked the Traveling Socks:

Oregon Socks
For my daughter-in-law, The White Lady Comments: The first one of the Traveling Socks knitted on vacation while we were driving. This yarn had a very long repeat of very similar but multiple blue shades and it took me ages to figure out the sequence to make both socks the same. When I started knitting it didn’t repeat for 5”! So in one ball there’s only perhaps 3 repeats at most. Also there was a knot in one of the balls but it seemed to be pretty much in the correct spot because after re-knotting to give me longer ends (to darn in later) I was only less than half a round short. I was concerned that the knot wouldn’t continue the pattern in the correct sequence but it did. I hate knots in printed colour sequences! Sometimes they are even backwards or totally out of place and make it really difficult to match things up. The blues reminded me of all the blues of the sea and sky that we saw on the Oregon Coast.

Comments: Another one of the Traveling Socks knitted on vacation while we were driving. I really like the colours in this yarn. It’s similar to a pair I made with greens instead of the browns. I like the way the spotted part includes more pastel colours of spots and not black and the way the plain colour sections are short so that they look more like hand-dyed yarns. I accidentally left out 2 rows at the end of the toes making them slightly more rounded. Plus I stupidly forgot to photograph them before gifting them to Milady Daughter. But this is the yarn: You’ll just have to use your imagination. The colours remind me of the redwood forests and the rocky beaches in California.

Lastly I had a chance to block the Flower Basket Scarf: Flower Basket Scarf
For me

Comments: I knit this scarf-sized shawl while we were camping, beginning it at Salt Point State Park in California and finished the knitting ten days later at Carl Washburne State Park in Oregon. This is an easy pattern but very effective as are all of Evelyn’s shawl designs. I did not double the yarn as the pattern called for plus I used slightly smaller needles so I knit two extra repeats of the main basket lace pattern. The shawl still blocked out slightly smaller than the original at 22” deep by 54” wide. For some reason mine is as wide but not as deep but I didn’t want to force the issue with severe stretching when blocking. I really like the little 3-bead edges at the points. They were easy to do and show up nicely on both sides of the lace. This one will get lots of wearing. And I still have enough of this yarn left for something else!

In other crafty news, Milady Daughter and I used the last of the woad leaves for another dye session on Saturday. We got the light robin’s egg blue on 220 g of some of her wool fleece. We were a bit concerned that the leaves didn’t have much blue left in them when the first dip turned out very pale. But after adding more soda ash and thiox and letting it reduce for a bit longer, we got the fleece darker and more even with two more dips. 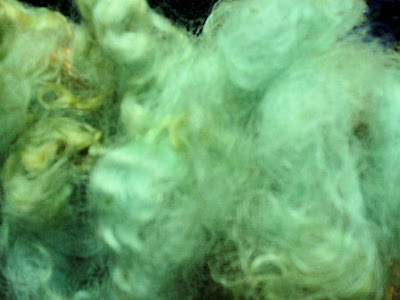 This is it for the woad this year. I’m going to leave the plants in until the spring when I’ll take out most of them, add compost and replant with new seedlings. I wisely didn’t use all of the seeds I got from Joybilee so I could have more for next year. Besides I only have just so much space to put the plants. Unless I dig up the public boulevard right next to my property! Don’t tempt me…

what a beautiful shawl :)