If you have done any plant dyeing at all, you will know how hard it is to stop. You mordant some yarn and realize that all you have to do is add a bit more mordant and you can use the pot again for some fresh fibre. You extract the dye from some flowers and then you pour fresh water over them and extract again and there’s still colour coming out so you do yet another extraction. All that colour goes in the pot and you add your fibre or yarn and when that’s done there’s still more colour left so you add more fibre. Then you run out of mordanted fibre and you already dumped the mordant pot so you start it over again fresh. The last dye in the pot just gives a little colour so you decide to overdye it with something else. And on and on. I can keep this up for days. Literally. I don’t want to waste any of my dyestuff by throwing it out before it’s completely exhausted. Or I am. It’s a race as to which comes first.

Since I was so disappointed with yesterday’s comfrey colour, I started back in on the dyepots early this morning. I poured the liquor from the soaking coreopsis into the dyepot and added fresh water and brought it up to a simmer. I did that several more times and still some colour was coming out. I put my skein of Alpaca Lace yarn into the dyepot and got a deep gold colour. I took it out and added it to a small pot with a bit of the dyestock and a splash of ammonia. The dye immediately turned red but I found I needed to add another splash of ammonia to get the yarn to shift. It was old ammonia so it may not have been very strong anymore. After about a half hour the yarn was a lovely rusty orange and it stayed that way after I rinsed it – quite a few times before the water ran clear.

Meanwhile, back at the dyepot, I added the comfrey-beige skein: 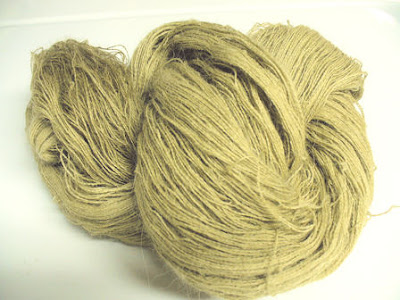 ...to the pot and gave it a good simmer. It turned a much nicer shade of green-gold. Remember it had an afterbath of copper yesterday so that probably shifted the colour toward green.

Here's the rusty skein and the comfrey/copper/coreopsis skein together. They coordinate rather well! I don’t know if I will overdye the green-gold eventually in indigo or leave it as is. I kind of like it now but I’ll wait until it dries for a full assessment. There was still lots of colour left in the dyepot so I mordanted (alum and cream of tartar) 200g of Corriedale sliver and threw most of that in, holding back a couple of lengths for later. After that cooked for awhile, I pulled out half of the now gold-coloured wool and added it to my ammonia pot. Then I put the last of the mordanted wool in the dyepot to see how much colour might be left in there. Right now everything is sitting down on the dye-stove with the heat off, absorbing.

See what I mean? Where do I stop? I grew and harvested those coreopsis flowers one by one with my own little (yellow-tinged) hands over the last few months. I want to squeeze every bit of colour out of them that I can. I can totally understand why dyers shifted quickly to synthetic dyes when they became available. Plant dyes are definitely a whole lot more work! And sometimes you just don’t get the colour you expect. But it’s so magical.

BTW, the photos may not show the true colours of my yarn because I edited them on my little Bluet with her shiny screen that seems to show colours more blue than my big computer. And I never can judge the intensity correctly on an LCD screen. And how do I know whether your screen is different again? For instance, I’m pretty sure that last woad dye we did on Milady Daughter’s fleece shows much too green thanks to editing the photo on Bluet, but I haven’t fixed it yet.

I’m not done yet in the dye studio for today either. I still have fibres that will need rinsing, pots and tools to be washed, splashes wiped up, a mordant pot to decide whether or not to keep going and a bunch of cooked flowers to compost. I’m resting first. The cold I have is still hanging on though I feel a wee bit more like myself today. I can tell because haven’t completely soaked through a fresh hankie yet. Unfortunately I managed to share the bug with poor T-Man who luckily is only a bit sniffly. (Good immune system, not like mine.) He gets tomorrow off in anticipation of Thanksgiving (because he has to work Monday) so he can rest up. The big family festivities are on Sunday at his brother’s house so we need to recuperate as much as possible before then. Don’t want to share the germs any further if we can help it. There will be 4 generations of family there to celebrate.

Here’s a few more holiday photos (because Magnusmog likes them so much!). This one is looking south on the beach at Carl Washburne State Park toward Heceta Head on the Oregon coast. Yes, it was definitely misty! 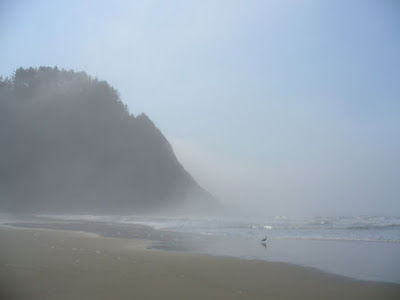 And also in Oregon, this is the view from the top of the sandy spit that divides ocean on the left and lagoon on the right at Cape Lookout State Park. 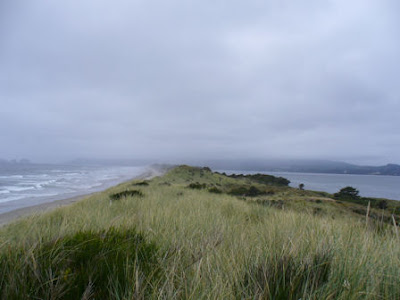 The spit is really long (5 miles maybe?) and I don’t think we’ve ever actually walked right to the end of it. Not enough time before the tide comes in! You can’t walk too far on the lagoon side either because the trail doesn’t go past this point and besides, the mosquitoes were snacking on us bigtime. There was an unusually large number of them nasty munchers.

And another of my “texture” shots. This is the lichen growing on one of the wooden cupboards that California state parks have in many of their campsites. This one was at Patrick’s Point and it didn’t have a bottle of tequila in it like we found once. Just newspapers for starting the campfire. I love the colours of the different lichens. 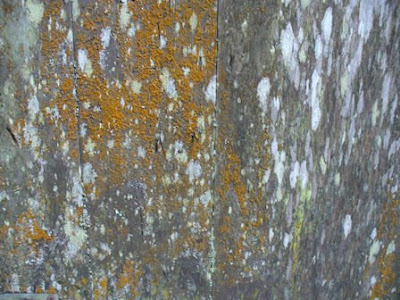 You know, I'm not a green person at all but I kind of like that green skein . . . I comes up on my screen as a celery green with variation. The other one leaves me cold. But then, I like the wild fuchsias, rich blues, purples & turquoise. Just paint me in hot, tropical colors!!!

I have to agree that natural dyeing is a lot of work with little satisfaction! I get a whole range of surprises that I can't even wear.

I hate to disappoint you, Sharon, but it's really more of a mustardy-green-gold than celery. Probably not in your personal colour palette at all! Though I know lots of folks who love those hot tropical colours as you do, I tend to be much more into the fall tones. I hope to take a more accurate photo of all the coreopsis colours I got - and check it on my big computer first before I post it!