Last week the world lost someone very special. Not a huge media celebrity or a politician, but a weaver. A quiet person who found endless fascination with the ways that threads can interlace and, moreover, had the ability to record what he found so others could enjoy those discoveries too. Peter Collingwood died suddenly in his studio where he had spent so much time over the years. I guess since you have to go eventually, that’s as good a way as any I can think of.

I have a few personal memories of Peter. I met him in the early 1990’s when he came to teach and give a keynote speech at Fiber Forum, the wonderful “camp” we used to enjoy every year at Camp Casey near Coupeville on Whidbey Island, WA. My old friend Mary Frame, a fine arts historian with a special interest in Andean textiles, introduced us but the two of them were already in a deep discussion of some esoteric technique so I politely slipped away. Later I took my copy of his “Techniques of Rug Weaving” for him to sign and he gave me a hard time about it as he wrote his name and the date. “You should get the newer printing. This one has too many errors in it!” Today this book is OOP but you can get a digital copy at the wonderful online archive along with Peter’s second rug weaving book – and about a gazillion other titles. This site is a treasure trove!

Peter was always extremely helpful to those who were struggling with any of the many textile techniques he was familiar with. He had a fascination with the rarely seen, odd or just plain puzzling such as sprang, tablet weaving and ply-split braiding. He then took what he found in ethnic textiles and analyzed, extrapolated, experimented and documented so others could also make use of these techniques. A rare gift indeed. I think he loved it when someone would take something he found or discovered and run with it beyond his ideas and into something he hadn’t thought of yet.

I remember he seemed rather gruff, but Peter was actually kind of shy and while everyone at Fiber Forum was chatting and laughing over lunch, he would go off to the local deli and eat alone. I think he needed the downtime. During his keynote speech he said that the reason he wrote his first book was so he wouldn’t have to teach in person. But all that did was make him more desirable as an instructor to interpret what he had written! I’m sure he was glad when his son Jason Collingwood took over doing all the formal teaching. I can so relate. For some teachers the process of teaching is energizing but for others, like me and perhaps Peter, it can also be draining. However, also like me, he never stopped giving his advice when asked.

Another aspect of Peter you might not know was his sense of humour. He adored puns and word play and you had to watch for the twinkle in his eye because you couldn’t tell by the deadpan delivery. And his wordplay sometimes came out in his work. My friend Judy once commissioned a tabletwoven belt from Peter and he managed to weave in a verse and also emphasize her name in capitals using letters included in the verse. Very slick. I know she has always loved her personalized belt and will treasure it even more now.

For myself I will always best remember Peter Collingwood the way I first saw him: on the cover of one of the first weaving books I got in the very early 1980’s. 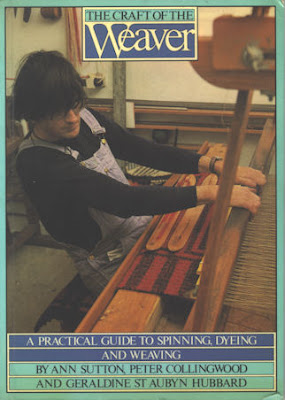 Wasn’t he totally cute? The textile world is certainly glad he gave up a career in medicine to be a weaver. His family reminds us that Médecins sans Frontières/Doctors without Borders was Peter’s favourite charity in case you are motivated by his memory to donate.

So. Moving right along. I finished the Back Home Blues socks and they’re drying from their first bath. I need to start a new pair for Princess Pink because she’s growing out of the ones I’ve made her. I showed my Flower Basket Shawl last night at my weavers’ guild meeting and a couple of people nearly absconded with it so I think it was well received. I’m really glad I nearly finished weeding the veggie garden on Wednesday because it’s mostly been raining ever since. Supposedly tomorrow will be nice so I can finish it and get the rest of the fall rye seeds in. But I haven’t picked the next batch of coreopsis flowers yet and they’re getting quite a beating from the rain. I’d just chop off their heads and see what colours I can get from the leaves, stems and all but T-Man would likely grump at me because they’re still quite pretty. Maybe I should try some blackberry leaves for dye since they need pruning but I don’t know – they fight back with claws!