A Bundle of Lumber & String Transformed

Milady Daughter now has a new (to her) loom. And it works, thanks to our (me, her dad and her) hard work! As I mentioned back at the beginning of this month, a woman in her weavers & spinners guild had an older Glimakra loom that originally came from an estate sale. Rumour has it that she never was able to get it working properly which is too bad. For her anyway. For Mil-D, who just happens to have me for her mom, it was a lovely gift. It took two Sunday afternoons to find all the appropriate parts in the pile, fiddle with a gazillion pieces of Texolv string (none of which were exactly the right length for what we needed) and get the thing assembled as an 8-shaft 10 treadle countermarch loom. We wound a teeny quick warp of just over 2 yards and 16 ends of horrid white acrylic knitting yarn just to dress the loom to see if everything worked ok. Countermarch looms won’t work without a warp on. Unfortunately I only had time to tie up 2 treadles for plain weave so the whole shaft assembly sank alarmingly when we pulled out the locking pins. It needs the weight of more of the treadles to hold it at the proper level. But I was able to get good sheds anyway and wove a few picks to make sure.

I’m sorry I forgot my camera. It would have been nice to have the evidence! We did discover that we had the beater assembly on backwards. Apparently the logo goes where you can see it? Who knew? But that can be easily fixed when it’s not warped up. More Texolv needs to be threaded onto the rest of the treadles and pegged up. Otherwise, she’s good to go! Her dad brought home her warping board to mend a broken peg and I brought home my 4-shaft table loom, not that I need it currently but it gets it out of her way. I have more storage space in my little old house than she does in her more modern 3-bedroom condo. I do love that my daughter has inherited my love of all things fibery – and she has the stash to prove it too.

While we were visiting, we also worked on her lace knitting lessons. She started a small scarf (Branching Out from Knitty) in her fine handspun camel/wool singles and had ripped it out several times as she got used to working the pattern. Her grandmother’s vintage plastic straight needles just weren’t pointy enough and the long length made it hard to work on the way to work on public transit. So I picked her up an Addi Lace circular and she began again. Much better now! It’s a testament to her excellent spinning that the yarn was still intact after all that knitting and frogging. And speaking of frogging, I was working on the second version of the Earthly Beret and now am more than halfway through the chart. It’s looking like this: Kind of resembles a lumpy bag of string, doesn’t it? But I think it’s coming out ok this time. Mil-D said that she thought the colours her Nana picked out for my birthday yarn weren’t quite me, but that’s because it’s somebody else’s dyeing job. I think it’s quite special since Nana brought it back for me all the way from Alaska. And it will certainly brighten up the drab winter days when I wear it.

Speaking of wooly things, this last weekend I unearthed several of my handspun hand-knit vests, 2 cardigans (one woven) and a beret plus a couple of newer pairs of gloves knit from sock yarn and gave them all a much-needed bath. I would have washed more wooly things but I ran out of places to dry them flat. It’s fun to check out my handspinning circa 1980’s vintage and contrast that with what I can produce now. One item, a colourful cardigan knit sideways with a shawl collar and button-on-off sleeves (so you can wear it as a vest as well) is a favourite garment that not only still fits me but oddly still gets compliments. 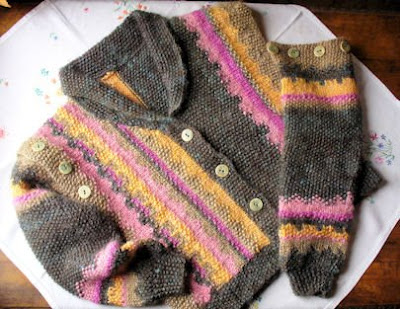 It was knit from a commercial pattern about 25 years ago but nobody believes how ancient it really is. The many buttons are porcelain and made by Ontario artisan Esther Grav, who no longer works in this medium (but sells yarns and equipment instead under the business name What’s Weft). They cost me a mint but they were worth it for the rustic effect. The yarn is local Romney wool dyed in acid dyes and the spinning is nothing to write home about, being somewhat inconsistent and with some yarns more loosely plied than others. The side-to-side knitting gives it a bit of drape and the illusion of being more fitted than the rectangular-shaped thing it really is. And I love all the seed stitch especially on the collar. Amazing the longevity of this sweater though, don’t you agree? I usually wear it as a vest without the sleeves.

Hooray for you and your daughter, making the loom work!

I am not surprised you still get compliments on that sweater. It's stunning, and the color combination doesn't date it.

I really love the colors in that sweater! Just goes to show ya that Yarn is worth spinning! Too think I used to laugh at people who talked about buying things 25 or 30 years ago which they're still using . . . & then I realized this morning that my HOUSECOAT was sewed by ME more than 20 years ago!!

The sweater colours in the photo are pretty dead-on, at least on *my* screen. Who'd a-thunk that blue-black (literally blue and black carded together), beige, yellow, pink and magenta would work so well as a colour scheme? I wish I could find the original pattern because I think I followed it closely (for once). I'm sure the magazine is kicking around here somewhere because I rarely throw anything like that out.

And yes, Sharon - my housecoat is just like yours: sewn by me over 20 years ago! Still functional so why replace it?