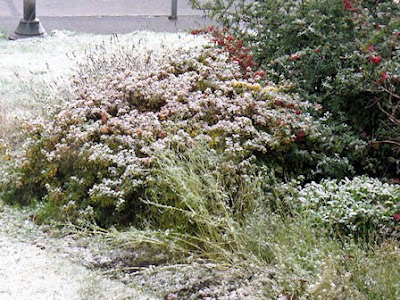 We currently have a light dusting of snow (somewhat more than the photo shows) and below freezing temps even in the sunshine. It’s feeling very winter wonderland-ish! And very bright. Yes, I know this is normal for most of the rest of the country, but not here in Lotus Land where it’s usually dark and wet. My furnace is going full blast to keep the house at 17 C. and I’m wearing my long underwear, several layers of fleece and fuzzy slippers. I’m still wondering what all the talk of global warming is all about. Couldn’t prove it by me.

We had a fantastic weekend just past. On Saturday we went to watch our granddaughter The Princess Pink in her Christmas skating exhibition. This is the beginning of our being there for the accomplishments of the next generation of the family! However, she was being her stubborn 4-year-old self and not cooperating. The big girls had to carry her out and she wouldn’t hold anyone’s hand. She is the littlest one in her group and is still very new to skates so they all skated around her. Waving at her adoring fans as she left the ice came easily anyway! It was so funny. Meanwhile both me and their other grandmother took turns with Stargazer on our laps. He was lovely and warm and clapped for everyone. So cute.

On our way home we saw a huge herd of Santas:

There must have been well over a hundred all walking down Main Street, over a block and a half long parade! I was trying to photograph them through the car window while laughing so hard the tears came. Now that’s my kind of celebrating the season! The costumes were very individual and fun. And that’s not all. After lunch we went out for our usual weekend walk and saw a cyclist with reindeer antlers, an elderly woman in a Santa hat impromptu dancing to carols played by a brass band, and an art car covered in plastic toys: 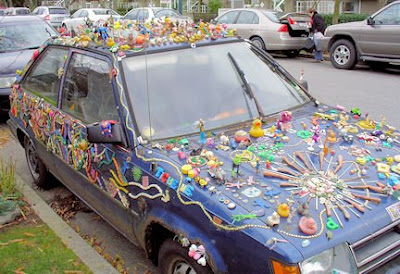 Quite the day to inspire joy. As long as we overlooked the crazy drivers!

Yesterday we had a party at the home of one of our local Ravelry knitters. Even with the snow and ice we were 7, happily knitting and munching on goodies and drinking yummy hot Glühwein. Not sure the wine was conducive to mistake-free knitting but it was really yummy. I have another party with my weavers guild coming up on Thursday evening too. Lots of celebrating going on.

While we were out, I found the Winter issue of Spin-Off magazine. I have to say this one is really a keeper! Lots of interesting stuff including articles on multi-blended batts and indi-dyers’ rovings, vicuña and guanaco fibres, Clemes & Clemes company (makers of my favourite hand cards) and lots of scarves woven with handspun yarns on rigid heddle looms. I was interested to read Peter Teal’s article on the Tex system for describing yarns. I always feel he can make a simple thing more complicated than necessary, but it is another way to document your yarns that might be useful for some. I tend to not care so much as long as I know the component fibres and approximately how much finished yarn I have and keep a sample of it for my records. But then I learned to spin by the seat of my pants in the “do-your-own-thing” ‘70’s. Long before counting twists and angles and getting balanced plies and all that stuff became so important to handspinners. Some of them anyway.