Interesting that while I was thinking about my word for 2009, I thought about “organize” but rejected it as too literal. Too obvious. And I’ve already been trying to get really organized for what seems like forever and never quite succeeding. My organized state fluctuates a lot.

I’m one of those people who likes some organization in my workspace but I’m not overly organized or anally neat. If it’s too perfect I’m afraid to touch anything and somehow I just can’t get to that pristine state anyway no matter how hard I might try. However I don’t really like to work in a huge mess either, particularly with too many different things going on at once. I begin to lose stuff in the chaos, including my focus. I know a number of people on both ends of the messy-to-neat scale and neither extreme seems to guarantee happiness. I’m much more content (heh!) to be somewhere in the middle of the continuum. Though fabulous and very creative work can come out of the most tidy studio or one that looks like a hurricane hit it. In the end it has to do with individual personality.

I think it’s interesting how some people can live so differently from me. The recent trend to minimalist decorating with many hard edges and neutral colours would drive me batty. (OK, battier than usual.) A lot of metal and glass with no textiles or plants to soften and warm is way too industrial for my taste. Easy to maintain and keep clean perhaps, which likely suits those who spend most of their time at work or in a coffee shop. On the other hand, surrounding oneself with heaps of dusty junk until the living space is reduced to a pathway through the stacks doesn’t work for me either. But we seem to be heading in that direction in spite of ourselves. Right now I’m having issues with some of the knickknacks…er, treasures around my house. I like them for sentimental reasons but I hate dusting them. I want to be able to clean surfaces easier but at the same time I don’t want to throw anything away. At the moment we’re at an impasse. The dust bunnies that lurk in the corners of my house are happy to have friends though.

Here’s one slightly dusty corner of my living room that’s looking pretty festive at the moment: 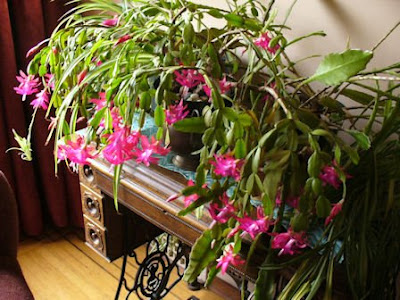 The Christmas cactuses are in full bloom now that the Thanksgiving cactuses have passed their best. This is the big mama one. Quite a display and a couple of weeks earlier than usual! It’s a little crowded on the old sewing machine cabinet with my big disocactus, 2 spider plants, and a small orange-tinted Thanksgiving cactus. They all have to hang out together until I can put the cactuses outside again in the spring. I found that was the secret to having lots of blooms on all of them: 6 months on the deck with plenty of water and a modicum of fish fertilizer. These guys will probably bloom again at Easter. Last year they had a bloom or two here and there continuously until nearly the time I put them back outside.

Speaking of last year vs. this year, my jewel orchids are the opposite of the cactus plants. I’ve only found one flower spike coming up so far. Boo-hoo. Last year there was a dozen or more. They usually bloom from Christmas through to spring since the flowers hold for a very long time. Unlike the cactus flowers that are gone in a day or two.

For some (long-awaited, I’m sure) knitting content, here’s the first of the two pairs of Stargazer’s Frankensocks from the bad ball of yarn: Well, I can't see the dust bunnies from here...

The socks are really nice.

Of course not! The dust bunnies are very shy and hid when I brought out the camera. They're there though. :)