Not Just Another Crochet Book

So here’s the promised book review: 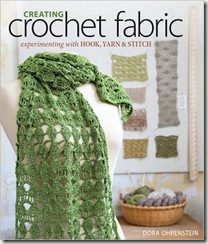 Dora is also the editor of the interesting (if somewhat sporadic) online magazine Crochet Insider. Her crochet patterns have been in Interweave Knits and other publications and this is her second book, the first with a big-name publisher. Her designs generally range quite far, from funky to elegant, but her text is always very clear, crisp and well-edited. Not so sure about the pattern instructions, since I’ve never tried to follow one. Yet. This book however is not about the patterns, though there are several attractive ones, nor is it a stitch dictionary, though there is a nice collection in the back of the book. Where this book stands out is hinted at in the subtitle “experimenting with HOOK, YARN & STITCH”. Dora starts out talking about the different fibres (similar to a highly edited version of my fibre talk!) and yarn weights and types, plus the different hooks and sizes. The first pattern is a stash-busting scarf in half-circle motifs that gives you a chance to test out many different yarns and their appropriate hook sizes. Then the author goes extensively into designing crochet by swatching and discussing the many considerations for achieving the desired results.

I particularly like that this is an empowering book. It gives you tools to create on your own rather than following specific instructions. Definitely not for the rank beginner, it is more appropriate for someone with some crochet experience under their belt. There are no basic level how-to’s and some of the pattern stitches are quite complex. The patterns are happily provided in both words and charts which is very useful. However instructions are only included for some of the swatches pictured, marked with a rather unobvious calligraphic dingbat. You have to go hunt for them in the back of the book and there is no cross-referencing of page numbers.

Another quibble I had was with the abbreviation and stitch keys located in the very back. Some of the patterns include “special stitches” which are described in the box at the beginning of each pattern. But the corresponding chart symbol has to be hunted down or sussed out. There is again no cross-referencing. In reverse, if you see an unfamiliar abbreviation or symbol in either of the keys, you have no idea which pattern it’s from in order to find out how to do it! Flip, flip, flip…

I do like the way Dora expects you to adjust and tweak her patterns for different yarns and your own shape and taste. She tells you what she did and what she used but they mostly provide illustration for her personal explorations in crochet design. Take the information and go forth and design for yourself. This is even easier to do in crochet than in knitting since stitches are mostly engaged one at a time and can be picked up in any direction. It’s relatively quick to do and easy to rip and repeat if it’s not working. Multi-sized patterns are difficult and confusing to write, everyone’s gauge is different and it’s so much easier to invent your own garment than it is to follow a pattern exactly. At least that’s been my experience. Creating Crochet Fabric would make a perfect companion book to Lily Chin’s Couture Crochet Workshop. The first for swatching the yarn and stitch pattern and the second for the garment shaping advice.

You can read a sample of Dora’s book online here.

While I was on the subject of designing for crochet, I was having a good time investigating Ravelry’s crochet vests. There are a lot of them that have been made without following someone else’s pattern so it seems that many crocheters at least are quite brave enough to dive in with a hook.

Even more interestingly, not many published crochet patterns have the numbers of users that you might expect. Something like the massive popularity with knitters of the Ishbel scarf, Monkey Socks or Clapotis doesn’t exist for anything in crochet. Is that because there are less crocheters on Ravelry? (Apparently crocheters actually outnumber knitters in the general population.) Or because they are more independent and less likely to get involved in the “viral” type of patterns? Or because although there are many renowned and influential crochet designers, there isn’t anyone quite on the stratospheric level of the Yarn Harlot, Cat Bordhi or Ysolda?

Some exceptions to this are the lovely and adaptable Seraphina’s Shawl, a free pattern by Doni that has over 800 examples on Ravelry; the One Skein Scarf free from Denise Cozzitorto with over 1700 and the Babette Blanket by Kathy Merrick from Interweave Knits with over 1000. And I’ve made Kathy’s Boteh Scarf myself, along with nearly 600 others! However none of the published garment patterns seem to be as popular as shawls, scarves, blankets, throws and the individual motifs for same. Maybe because of fitting issues? Am I the only one who finds this fascinating?

And speaking of shawls, maybe I should finish my Damselfly Shawl (aka Dragonfly Shawl by Lisa Naskrent) before the poor thing self-destructs from neglect, huh? All talk/write, no action. That’s me.

(Note that all the previous links are from Ravelry. If you aren’t a member yet, why not? It’s out of beta and you can get in right away. Or perhaps you might be trying to avoid this huge time-suck! FaceBook/SmaceBook. Give me my Ravelry.)

Crochet seems to lend itself to freeform more than knitting... at least in my personal opinion.

Yup! So true. The advantage is that you don't (usually) have more than one stitch on the hook at a time. So you can plant it pretty much anywhere. It's not so dependent on what happens to the stitches around it. However I think the more experience you have with knitting, the more you can do with it also. They both have their strengths and weaknesses, IMO. That's why I like being able to do both!