I’ve been debating with myself about how to review the new natural dye book that I got the other day. I both love it and am annoyed with it at the same time! So pardon my ramblings and feel free to disagree with me. Be aware that I’m coming at it from the point of view of an experienced dyer and have no idea how beginners would see the same information. (Or notice any lack of it!) 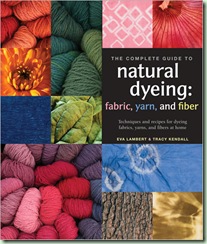 The Complete Guide to Natural Dyeing: Techniques and Recipes for Dyeing Fabrics, Yarns and Fibers At Home

This book has the most juicy photographs which is definitely what sold me on buying yet another natural dye book. However, in an attempt to be a “complete” guide, the authors seem to me to have reached too far and so missed some things. Other reviews are more complimentary but maybe I’m more jaded (or maybe just more experienced) than most. On mulling it over, I found it was kind of like my feelings about the movie Avatar: very pretty to look at but afterwards there are many questions, doubts and disagreements that arise. I won’t bore you with every detail but the book could have used more serious editing, particularly when being translated from British to American English. For example, a potentially nasty error could result from the typo on page 60 under Indigo Vat Dyeing where hydros, an unfamiliar nickname (at least in North America) is eventually defined as sodium dithionite (correctly) or sodium hydrosulphate (totally wrong!) It should be sodium hydrosulphITE (or hydrosulfite in the US spelling). S. hydrosulphATE is a completely different chemical. Also here in North America it’s much easier to obtain thiourea dioxide which is stronger and more stable than sodium hydrosulphite and the recipe would need to be adjusted for the difference. This fact is seldom mentioned in any dye book perhaps because the author isn’t aware of what’s not available elsewhere.

Two pages in the beginning are used to show “About This Book” which is somewhat redundant to me. Just turn the pages! But the important information labelled “Safety First” which absolutely should be at the beginning, is at the back. Furthermore, in several photo sequences gloves are not being worn when they should be! Overall I felt a lack of details that frustrated me and at the same time thought some things might have been better left out entirely. For example, in the section under “Introducing Pattern: Using Your Fabric”, simple spots and stripes are mentioned as being easy to achieve. However, nowhere does it say how to do that! I would like to know myself. There’s also a “Motif Directory” in the back with no real information on exactly how to use the motifs. Make a stencil? Use batik wax? Something else? Frustrating. It’s like looking at yummy cakes and cookies through a glass window!

Some of the more complex dyeing techniques were a big part of my interest in this book – how to achieve multi-colours on fibres using natural dyes, which is more difficult than with synthetic dyes. The authors, Eva (who specialises in yarn dyeing) and Tracy (whose focus is fabrics) cover simple tie-dyeing, clamp-dyeing and dip-dyeing methods. There’s even a little bit on batik with indigo. This whole chapter is just a taster really but can give you a place to start. I used the dip-dyeing technique myself with the rhubarb leaf overdyed with madder and dipped in ammonia modifier that I did the other day.

On the other hand, the dye recipes themselves are very specific. Mordants used are the usual ones (alum, copper, iron) except for the increasingly-avoided chrome and only one or two with tin modifier, and they are in the modern (lower) percentages. The yarns are wool only and the recipes are separate from the ones for fabrics, which are specified as wool, silk or cotton. Some of the dyestuffs are repeated for both yarn and fabrics. No real mention is made of using tannin with the cellulose fabrics and acid or alkaline modifiers aren’t discussed either. I find tannin important in getting good colour on cotton and linen. Using modifiers, whether acid, alkaline or one of the mordants, was a big eye-opener for my dyeing that I learned from Jenny Dean.

You can obviously get colours on your fibres with this book and there is lots to think about and do further research on here. It would not be my only natural dye book though. So far nobody covers everything I want to know, not even Dominique Cardon (though she wins for most amount of actual science content). But my favourites by far are any of Jenny Dean’s books. I already own it, but happily her Wild Colour book is scheduled to be reprinted this fall – a good move since copies are currently going for $160 and up on Amazon. Speaking of Jenny, she is acquainted with both of the authors of The Complete Guide to Natural Dyeing and gave it a kinder review here.

Later I’ll contrast this book with a much older but still excellent dye book that I got out of my guild library.

I was hoping you would review this book, as I had considered buying it. I think I'll hold off until Wild Colour comes out; it's been on my list for a good while now.

I've signed up for the "25 Colours From One Dye Pot" workshop at Gibsons this year. :o)

Hope I didn't turn you off the book altogether! However if I had to have just one, it would be Jenny Dean's "Colours from Nature: A Dyer's Handbook". Little book, hardly any photos but LOTS of really excellent information. (That's where I got the idea for the rhubarb leaf as mordant.) Maiwa has it. Quite pricey but worth it.

The workshop you're taking doesn't say what dyestuff shes using! Sneaky. Sounds like fun! Hope to see your samples.