The weather has been quite nice, though a little chilly, so I’ve been compelled to shove more of my little plantlings into bigger pots and into the greenhouse to begin hardening off. The tomatoes and peppers, basil and cilantro are still under the lights in the basement but there’s no room for anything else in there. A number of flats still get moved in every evening and out every morning so it’s quite a job to get everything sorted, watered and rotated into appropriate spots. I’m not in any hurry to plant them in the garden though. The nights have been quite cool and there’s been an occasional wee touch of frost still. Better to wait even if I have to replant the lettuce and other greens. We can always eat the babies. Hmmm…that sounds mean. But yummy!

I’ve been working on a few things to show but I’m kind of short of time today. So we’ll go with this finished item: 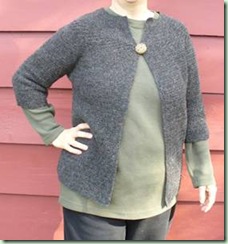 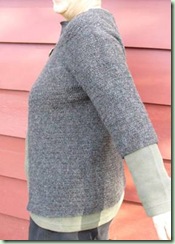 Mods: The only changes I made to the tutorial was to use a texture rather than an openwork pattern on the yoke and to make it slightly longer than hip length. I was also careful to work the sleeves by crocheting the sc round from the front and then turn and crochet the dc round from inside the sleeve so the stitches look like the body pattern (where I turned for the dc row). And I did 4 rounds of sc in the back loop for the borders, leaving a large buttonhole on the right front. 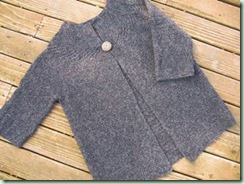 Comments: I love this software! I started with the standard size women’s 38 which gave me 2.5” ease. The results fit me perfectly. The yarn was a big cone that has been in my weaving stash for a gazillion years. It was harsh, oily, dusty and dirty. Took 2 washings in Orvus and one in Unicorn Power Scour plus 2 more rinsings to get it clean! Now it’s nice and soft and drapey and fits me perfectly. The big brass-coated plastic button is a vintage one from the stash that I’ve had since I was a teenager.

I’ve also been busy making pockets for the Green Peace Cardi (my version of the Shalom) and playing with flour paste resist on cotton fabric but I still have to sort the photos so those reports will come later. I’m currently nearly up to the beginning of the V-neck decreases on the renamed Shamrock Cardi (was the Green Star Reprise). Since I’m knitting it all in one piece to the armholes that’s a goodly chunk of the sweater body done. I’m liking this version much better and am glad I frogged it to start again with a re-jigged pattern.

Most of my knitting (and crochet too) seems to be using finer yarns these days. I guess because the results are more flattering and wearable than chunky things. Even the Green Peace Cardi was only a slightly heavier weight yarn than regular knitting worsted instead of the bulky yarn used for the original Shalom. That’s about as thick as I would prefer to work with even though the results are much (much!)quicker to knit. I’d rather have finer layers and lighter weight garments. I don’t want to feel like I’m wearing a kilo of wool on my back! Doesn’t bother me at all that it takes longer to create. It’s just as much about the process as the project.

And I have to say another good thing about the Knitware software. I want to make a pair of leggings with sock yarn. I have a pattern that I bought for this but due to my (ahem!) mature figure, I have to combine a smaller lower leg with the largest hip size. The appropriate calculator in Knitware Sweaters gave me the right rate of increases to do this. I just had to plug in the number of stitches at the start, the number I wanted to end up with, the number of rows (based on the row gauge times the leg length) and the fact that it was increased on both ends of the round and poof! There was my increase sequence all figured out. Absolutely minimal math.This makes me very happy. I’m waiting to begin this project until I’m done the Shamrock though. I’m afraid to start too many new projects in case it gets stuck in limbo again.