On Tuesday evening, T-Man and I headed back over the Ironworker’s Memorial Bridge again to Deep Cove for the opening of my guild’s 75th Anniversary show. Here’s the invitation and that photograph of Kirsten’s lovely shawl is the perfect introduction to the items on display. (I think it might have been cropped from one of the photos I took for her.) The opening was a really fun party with lots of dear old friends, cake, strawberries, yummy nibblies, much chatter and hugs. Some of these folks I’ve known for 25 years! But that’s only 1/3 of the guild’s long existence.

I didn’t get the best pictures of the show since I didn’t take time to set up the shots properly. Everyone was mingling around so I just snapped quickly. But here’s some of the displays anyhow: 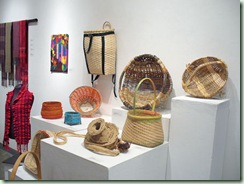 Baskets. I love the pack basket on the wall. I don’t really make baskets so I’m always in awe of what they come up with. 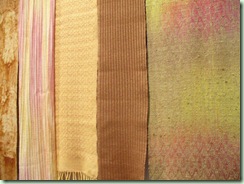 Colour. The gorgeous one peeking out on the far left is by Dawn and dyed with a rusted muffler! (Get it?) 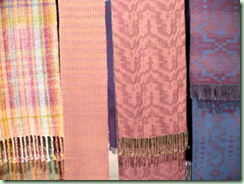 Structure. I didn’t record who wove these but love the one on the right intensely. 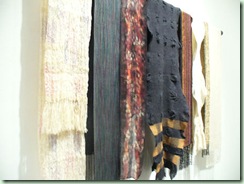 Texture. I so love the neutral colours and exciting topography of these ones. I’m almost wishing now that I had taken Anne Field’s collapse weave class as well as the spinning one. I need to get back to weaving and experiment. Yeah, I know I’ve said that before. 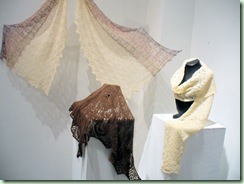 And of course the lace corner! That’s my bison shawl in the middle of the only handspun and knitted pieces and mine was also the only triangle in the entire show. (Dare to be different!) The top one is by Ruth and the one on the right by Masami.

There were lots more including a truly impressive large jacquard woven image by Kaija, several drawloom-woven pieces by siblings Janice and Ruth, two little tapestries by Myrna (I loved the Jazz Cat) and a whole plethora of scarves in a rainbow of colours, fibres and structures. I think it was said that 35 guild members contributed pieces. Pretty impressive, hey?

On another note entirely, yesterday I spent the morning buying a couple of patterns from BurdaStyle and then printing out and assembling the one for Celestina. I have no idea what fabric I’m going to use but I think I’ll make it with cap sleeves for a summer dress kind of like this one. And I might change the neckline a bit too. It’s also cute sleeveless so there’s lots of variations possible. It seems the sizing is much more accurate with the patterns from this source (at least the ones actually produced by their team), but I’ll find out for sure when I trace off what I hope is my size from the “jigsaw puzzle” and tissue fit.

Note BurdaStyle has free patterns on offer as well as low-cost copyright-free ones from a number of sources, including Burda Fashion (aka Burda Style magazine). If you already have the magazine in question though, there’s no point in buying the pattern again because you still have a lot of work to do to get to the point where you can cut out a garment! The styles have a youthful Euro vibe yet many include larger size versions so they aren’t just for skinny-minnies. There’s even one I like that I would have to size down to fit me. I also like that the website saves the patterns that you’ve downloaded, both the free ones and the paid ones, so you can download anything again if you need to. There are tonnes of tutorials and the newsletter is also worth subscribing to if you are interested in garment sewing.

If you prefer, most patterns have an optional PDF that you can use to print at a copy shop on 3-foot wide paper which saves the “jigsaw puzzle” step. Which really wasn’t that difficult except for the fact that my printer doesn’t print to the edges of the paper so I have little gaps in the lines where they should match. Not a big problem though as long as I was careful to line things up properly. Now I’m wishing desperately for the dressmaker’s stand that I’ve been threatening to make for ages. Soon! Maybe this weekend if the weather is as bad as the forecast suggests. It’s too hard to fit things on your own body.

In other news, I also plan to cast on a new knitting project today. I have decided that my Rhubarb yarn is going to become a Multnomah. 2100+ knitters can’t be wrong. Off to wind a ball and hunt down 3.25mm Addi Lace circs…