At least it’s supposed to be summer. Couldn’t tell by the weather though. Cloudy and cool. I should be in the garden while the getting is good. Later today perhaps. If it doesn’t rain.

The big news is T-Man got himself a new ride! Meet Roscoe: 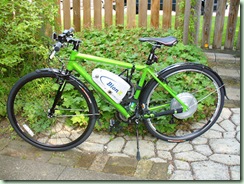 T has wanted to cycle to work at least one or two days a week for a long time but it’s just a little too far for someone swiftly nearing a decade that begins with a 6. He thought about putting his bike on the bus to work and then riding home, but the bus doesn’t run early enough to get him to work on time. There’s no point doing it the opposite way, even assuming there would be a bike spot available on the way home since local buses only have a rack that carries 2 bikes at a time.

So he started doing some serious research on electric bicycles and looking around at the shops and discussing with acquaintances and this was the result: a regular 24-speed bike with a BionX electric assist. It’s so cool! You still get to pedal and get exercise because it is a regular bike but then when you need extra oomph, you’ve got all you need to get up that hill or to help you along when you get tired. The best of both human and electric power. It’s very intuitive. And made in Canada too. He found what he wanted already mounted on this bicycle, a Haro Roscoe. See Roscoe’s sparkly acid green paint job? 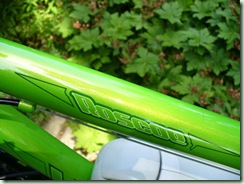 Isn’t he purty? Ah, but then I bet you’re thinking that I would be so totally envious unless I got one too. Naturally, I couldn’t let T-Man have all the fun, even if I don’t have a commute to work for an excuse! The shop (more on them later!) had another rack-mounted BionX already on this beauty: 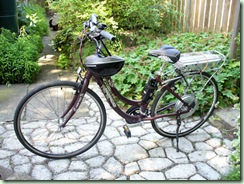 A Norco Rideau Ladies in a matte red-brown with lace doilies! Seriously, see? 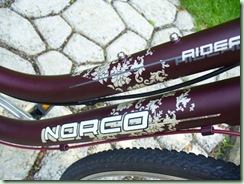 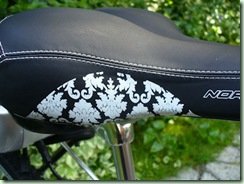 Isn’t she lovely? It didn’t take any convincing to get T to agree on getting her for me. I just looked at him and batted my eyelashes! Ah, but here’s where the story gets crazy.

If you tried hard enough I’m sure you could figure out the store where we bought these, but I’m not going to mention their name because it was not what I would consider a great sales experience. From the time we got there until we could ride home it took over THREE incredibly long and boring hours of mostly hanging around waiting! (No, I didn’t even have my knitting. Doh.) Of course we spent a half-hour or so test-riding and deciding we wanted to purchase these two rather pricey bikes but to actually get the things checked over, detailed and paid for took f o r e v e r. I admit the unexpected power failure wasn’t their fault. The building lost power 3 times over about half an hour or so and they could neither ring up a sale (computer was out) or work on the bikes (lights and other equipment not functioning) but that was only a portion of the delay. The rest of the time (2 stinkin’ hours) we were just kept cooling our heels while the owner did the detailing (sort of) before we could even complete the sale and pay for them. Neither the boss nor the 2 staff were particularly efficient, though friendly enough. And they did apologise several times for the ever-extending wait and even gave us a candy bar each to tide us over since we had passed dinnertime and it was 7pm by the time we left the store. But puh-leese! Less patient or less determined customers might have walked long before. But we had found Our Bikes and knew there was no other choice but to stick it out. But man, were we tired when we got home!

Naturally later we realised that we didn’t get any owner’s manuals (luckily they’re available online), the tires weren’t inflated properly, the switch that was supposed to have been fixed on mine wasn’t quite (though T fixed it himself, we hope), and my tail light isn’t working though it did earlier in the shop. Yes, the bikes and BionX’s have good warranties on them so we’ll take them back if things don’t resolve themselves. Wonder why we aren’t in a big hurry to go back right away though?

We gave our new bikes a good workout on Saturday, riding to our usual magazine/book shops and down to Granville Island for lunch and to purchase some goodies for dinner. T and I were both pretty pleased with Roscoe and Rideau’s performance and they got us back home up some pretty steep hills with ease.

Then yesterday, we walked to Car-Free Day on Main St and had a great time watching all the people having fun. There was spinning, weaving, knitting and felting in front of Birkeland Bros and more knitting in front of Three Bags Full. There were unicycles, a Mondo Spider robot, street hockey, ladies roller derby, sales booths offering a myriad of goods and food, musicians, dancers and boom boxes, bubbles and a car with a tree and plants where it’s motor used to be. The best thing we saw though was a traffic cop who was blowing bubbles when he wasn’t blowing his whistle! Good times. There’s something really pleasant about walking down the middle of the street that’s usually filled with lethal traffic.

I bought a few more Indian scarves for warm weather wear but nothing else so we continued down to Broadway to the sports and cycle shops. We were both looking for new helmets to go with our new bikes. It took about 4 different shops before we went back to the first one again. T got a green helmet a little lighter in shade than Roscoe and I got a black ladies’ one. The construction has changed quite a bit and this helmet is much more comfortable than my old one - which probably should have been replaced a decade ago at least. I just haven’t ridden enough to get around to it before now. So now we’re all decked out and I guess we had both better start pedalling to justify the expense, huh? T will try it tomorrow for the first time. He has to get a key for the bike lockup at work. I’m wishing him well!

Free to a good home: one man’s and one woman’s used touring bikes. Somewhat-aged and slightly rusty but still functional (kind of like their current owners).