Coming To You From My Deck

While I toast the unsightly psoriasis legs in the sunshine. Whew! We babysat 3-1/2-year-old grandbeastie Stargazer overnight for the first time. This Granny is pooped! He was pretty great though. Slept through the night beside us on the floor in his little portable air-mattress bed. When I got up in the middle of the night to go to the bathroom, he had to go too so woke (at 6am!) a dry bed. Late this morning his other Grandma came to fetch him and spell me off. Her daughter (his mom) is at the hospital doing some medical tests.

We had a great time this morning and I still managed to get lots done. I started the laundry while he rode the tricycle around the basement. I weeded a bit of the garden while he rode up and down the front sidewalk. He even helped pull out some of the weeds and put them in the bucket. Then he drove the “pirate ship”, aka my big loom which has wooden ratchet handles that remind him of ship’s wheels, and wound short lengths of yarn on the bobbin and ball winders while I ironed a few of T-Man’s shirts. We also played Play-doh, which is Stargazer’s absolute favourite pastime – next to playing trucks (or “frucks” as he calls them) with his grandpa, which they did last evening before bedtime. Outside on the shady deck is a great place to play. The tiny bits of Play-doh that are left just sweep into the garden where they dissolve.

BTW, did you know that Play-doh was originally invented in 1956 as…wait for it… wallpaper cleaner? And although we can make an acceptable substitute, the original formula is a secret known only to the manufacturers. Go figure. Instead of shaping the dough with his hands or using cookie cutters, Stargazer likes to use the extruder toys and chop the “worms” and “snakes” up with the plastic scissors. And the colours are totally irrelevant. Both he and his 5-year-old sister just mush them all together randomly until they are mud. Fun.

So my dear readers might be interested to know that I’ve resurrected a funky pair of baggy pants that are very comfortable to wear. They were made sometime a year or so after I got the Issey Mikaye pattern in 1994: 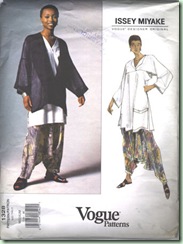 The crotch hangs around my knees so they feel like wearing a skirt but with the practicality of pants. 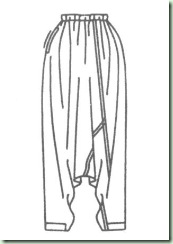 There’s a reason why I never get rid of anything! I have two pairs: one in gold polyester and my favourites in dark brown rayon corded twill which has a heavy drape and feels nice against the skin. Bare skin. Heh. However it’s too hot today (summer, yay!) so I’m wearing shorts instead. Oh, and I also managed to buy 2 pairs of Elita undershorts when I was at the mall yesterday, one in cotton & lycra and the other in rayon & microfibre. Very comfy. I may have to get more of the cotton ones. This creeping crud thing is becoming rather expensive. Bleh.

Speaking of that Issey Miyake pattern, I’ve also made the shirt from rayon that I stamped with Japanese resist paste and painted with fabric paints. I sewed up the underarms though instead of leaving them fashionably open. Unfortunately, being rayon, this shirt wrinkles like crazy every time I wear it. It’s very light but covers well when I want to avoid the sun. Some day I’d like to make the jacket out of something transparent but with a bit of body. It would work well with the rest of the outfit in either dark brown or dark indigo blue.

And speaking of sewing, I’ve finished the sleeve block and am currently working on the skirt. So far everything I’ve read about the skirt sloper (block) contradicts each other. Either the front should be wider, equal to or narrower than the back. The amounts of ease varies also, I think depending on whether this is to be used with the bodice sloper for a two-piece dress where you would want a bit more ease or alone for a skirt where you would want a closer fit at the waist.

And speaking of waists, the elastic waistband in my brown baggy pants surprised me by staying put in the correct spot, the one that would be my waist if I actually had one. I will have to measure it because it’s exactly the right size. It neither rides up because it’s too tight nor slips down because it’s too loose. If I can reproduce this effect in a skirt I will be very pleased. Also it must mean that my waist dimensions haven’t changed much in 15 years, huh? Or if they did, they’re back to the same ones now!

It’s pretty warm up in my studio right now. Not that I’m complaining, mind you! But I’m on the deck (in the shade now) catching the breezes and watching my blueberries ripen. I think I deserve to relax for a little while. At least until I need to drag myself in to make the bed, put the next load of laundry in the dryer and figure out what’s for supper. ’Splain to me how folks with a Real Job find any time to themselves at all? Or does it just make you more efficient when you know you have limited hours to fit in the want-to-do’s along with the have-to-do’s?