Yesterday, my Spectrum Study Group had a great time playing with clamp-resist dye techniques. Called ‘itajime’ in Japan, it uses matched shapes and clamps to resist the dye. We used sawn sections of lexan and plexiglas, perforated plastic pieces, little round dishes (petri dishes?), metal shapes and other assorted bits and bobs. As long as there was a pair of them to be clamped on either side of our folded sample pieces of silk chiffon and, for the second go-round, silk chiffon scarves. The folds were simple or complex and we ironed them into the slippery fabric to make them more distinct. The dyes we used were Lanaset (Telana) and some of the dye was thickened to prevent it from seeping under the resists. Because of that we had to paint it on instead of immersing in a dyepot so it was somewhat tedious and time-consuming but we got some nifty effects.

After we painted on the dye, we left the clamped fabric to set for about 20 minutes or so. Then we took off the clamps and resists carefully leaving the folds in and wrapped the cloth in cling wrap. The little packets were then steamed for another 20 minutes or so in the steamer pot. There was very little to no colour washout in the rinse water. Silk chiffon dries very quickly but it kept raining just a little on them while they hung on the railing keeping everything damp.

This is what our picnic table on Jo Anne’s deck looked like: 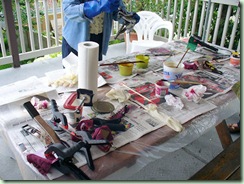 We were lucky her husband had a tarp rigged overhead because it kept sprinkling on us on and off all day. It’s Jo Anne’s spring/summer/fall dye studio as well as outdoor eating area.

So here’s me  with one of my twice-clamped-and-dyed sample: 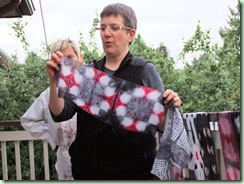 Probably yapping away as the photo was taken (by Sandra) as usual! This piece had plenty of detail but I bet I won’t be able to ever make anything like it again. Notice the spotty one over my arm. I found some perforated plastic rectangles at Urban Source (cast-off industrial junk…er, wonderful creative art supply store). It was hard to get the dye in the holes but it kind of turned out neat, I think.

Here’s the final results from 8 people: 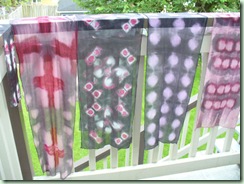 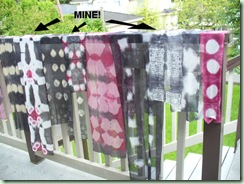 Notice how they are all so different! A few of the scarves had a pale under-dye of rose, blue or tan (the last using tea). The rest were plain white to begin with and we only used the two dye colours, black and magenta (really more of a Bordeaux red), on them. I may or may not overdye my scarf (second from left). I’m thinking I need to knock back the bright white some. The donut shapes are from empty tape rolls and then some lexan rectangles. Fun.

We’re still debating on what we’re going to do next. We’ve done so many things over the years and we have somewhat different interests so it’s hard to choose something that excites everyone.

Speaking of my guild members, I probably forgot to mention that I won the door prize at the Seymour Art Gallery where we had our recent 75th Guild Anniversary show! I was unable to pick it up when the show closed so just got it today delivered personally by our guild president. So cool! I never win anything, particularly anything good, and this is a whole basket full of handmade goodies! I’ll have an individual accounting for you when I get them all photographed. I need to write something up for the guild newsletter anyhow.

Lucky you, that was a gorgeous basket of goodies. Interesting dyed scarves.