So Who Said Life Was Fair?

I apologise right off the bat for being such a splotz (new term, invented by me, expressing the whining, whingeing, depressing, crabby, sick, blech, lazy, good-for-nothing blob of barely human woman I’ve recently become). My psoriasis looks worse than a deathly case of leprosy up to my waist, my tummy is still somewhat bubbly and unhappy, and now I have a sore throat, post-nasal drip and a huge lack of energy. Currently I’m curled up in bed with my knitting and my netbook, along with a hot cup of tea and feeling quite sorry for myself. So there.

If T-Man wasn’t also sharing in the tummy and the sore throat I would be tempted to consider them side effects of the new and rather scary meds that I’m on for the psoriasis. At least so far, none of the evils have shown up, but you never know. I haven’t even been taking the pills for a week yet. There’s still time for my lips to peel, my hair to start falling out, my eyes to dry up etc. Are we having fun yet? If only it works on the psoriasis I won’t mind.

I did get one thing done – I finally finished painting the last four of the flour-pasted cloths that I started months ago and left in my studio to get dusty: 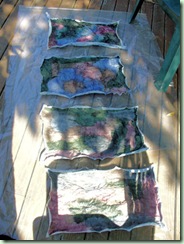 Not to worry if you can’t see them very well in this sun-dappled photo of my deck. They don’t look like much until the paste is scrubbed off anyhow. So far the fabric paint (Setacolor transparent) colours the surface of the paste as well as the fabric in the cracks. You get a better idea of what it really looks like on the back. I left them alone several days for the fabric paint to set before I scrub the paste off. Maybe if I have any energy later on today.

So T and I both sat around splotzing most of the day on Saturday but roused ourselves on Sunday afternoon to pick the garden produce (peas, raspberries and blueberries) and water everything. Later we took the bikes out to check for magazines (none) and get a few groceries. We also spoiled our miserable selves with a chocolate éclair from Beard Papa’s and the delightfully friendly Maggie at their shop in City Square. Yum. Works pretty well to cheer one up. At least a little.

Have I mentioned how much I love my new bicycle? Yes? I don’t mind saying it again. But I’m finding it interesting when I take one of the city’s designated bicycle routes. Cycle traffic! Yikes! I have to get used to the speedy Lance Armstrong types passing me while getting stuck dinking along behind the poky ones. If I pass them, they pass me and then I’m stuck behind them again. It seems rude to zip by everyone using my throttle! We end up meeting again at the next light anyway. Urp. I don’t usually travel with so many other bikes around me and it feels strange. Nice to see folks out riding though. The weather has been perfect for it.

Yes, it’s hard to stay a miserable splotz when we’ve recently had the most perfect summer weather one could wish. Temps in the low 20’s C, perpetual sunshine, coolish nights for sleeping – absolutely ideal. May it continue on indefinitely.

And may the illnesses that infest me go away. Immediately. I want to enjoy the summer while we have it. It’s quite an ephemeral beast at the best of times and needs to be savoured, petted and rolled in. Sitting around in bed reading and knitting can be done any time of year. Preferably when it’s rainy, cold and dark.

All right. Enough with the splotz already.