Can’t say the land doesn’t need the water we’re getting today but it feels more like winter than summer. I’m trying not to feel guilty that I should have picked the coreopsis yesterday but instead I weeded the veggie garden. It felt good to be out in the dirt again! The garden is definitely slowing down now though at least we’ve had great summer weather after that lousy spring. They’re predicting a cold winter this year with lots of precipitation thanks to good old La Niña. We’ll have all those lovely hot summer days to remember when we’re shivering in our shoes!

T-Man and I had a lovely weekend. On Saturday we loaded the bikes up on Fraulein (our old VW Westphalia) and went out to Richmond to ride on the dykes. (Don’t look at me funny. That’s how they spell it on the signs!) We started at River Road somewhat to the east of the Olympic Skating Oval and carried on past to Terra Nova: 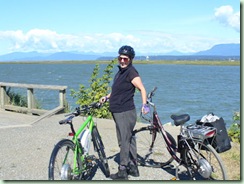 That’s me with Roscoe and Rideau. Notice my new tote-bag/pannier-basket. I got it from Mountain Equipment Coop and it works a treat! Holds my backpack so I don’t have to. It doesn’t put my balance off the way it does carrying the weight on my back. Anyway, then we turned the corner: 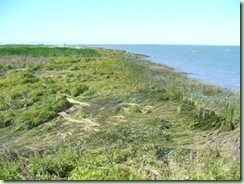 and headed towards Steveston. Once there we found an even larger crowd than usual. They were having some kind of seafood celebration so we even had a hard time finding a bike rack to park in! We ended up chaining up to a fence by the wharf. Then we found a quieter spot where we had a lovely lunch on the deck at the Mandalay: 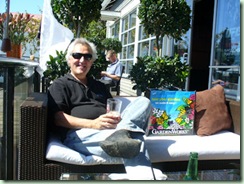 Crab cakes and prawns and drinks – oh, my! Meanwhile while we were relaxing, everyone else was buying up all the seafood and leaving no fish for us, even though we had brought a bag along to pack it in. When we got to the ramp it looked like this: 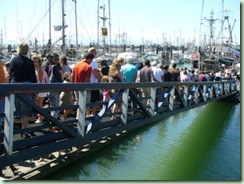 The line-ups were ridiculous and many boats had sold out already. Unfortunately we weren’t interested in live sea urchins or frozen spot prawn tails which was just about all that was left so we went home empty-handed. At least we had seafood for lunch!

On the way back we stopped for a look at the big turtles that live in the ditch behind the dyke: 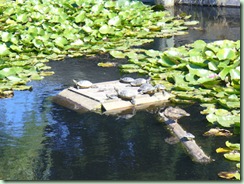 I like that someone has made them a couple of sunning spots, also enjoyed by the duck.

Somewhere on the ride I lost the stupid magnet that’s part of my electric assist system. It had already been fixed once when I bought the bike but fell out again. T-Man fixed it this time and hopefully it will stay. I can’t be bothered to go back to those twits people again. Luckily the assist still worked, just not the braking and recharging so I got back to the van just fine. We rode 23 kilometres round trip. That’s nearly the equivalent of T riding to work and back and work again and the wind was blowing pretty hard the whole time. (Check the whitecaps in the first 2 pics.) I was pretty impressed with me.

On Sunday, we lazed around in bed and later walked to the market for a few groceries. So T is scheduled to get the last 3 weeks of September off work. If we don’t get to go away anywhere, this is the type of “day-cation” we hope to have instead. Lots of them. Interspersed with lots of relaxing. Depending of course on the weather.