My Travelogue, Part One

I promised to tell you of our three weeks’ adventures so while I’m waiting for it to warm up enough to go play in the garden, here ya go.

It feels like a long time ago now when we packed up our little old VW Westphalia and headed south. The border was relatively painless this time, even though they’re still working on the US part of the Pacific (Peace Arch) crossing. We hung a left at Burlington (after stopping for groceries) to head east through the North Cascades. This was the first time we’d been this way though it’s nearly directly south of our familiar Manning Park. The scenery was lovely: deeply forested mountains and sparkling rivers that had been dammed in some places for hydro power which created attractive lakes. There were several national park campgrounds and we stayed at two different ones. This is the view of Diablo Lake from the top of Thunder Knob: 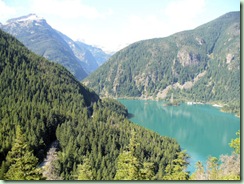 The weather stayed sunny and quite warm, which was a good thing since T-Man had forgotten to pack my warm jacket and extra fleece! I had left them hanging in the closet with the raingear which he delicately extracted without taking the rest of my carefully sorted pile. I was pretty upset because I knew it was going to be cold enough to need something more than the fleece vest I had on. And I hate shopping, particularly since we weren’t going through any larger towns for at least a week. Things worked out ok though because on the third day we stopped in the cute little pioneer-themed town of Winthrop with it’s wooden sidewalks. For a miracle, this shop… 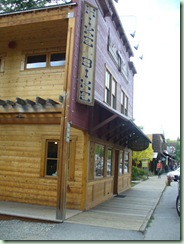 …had a great selection of good quality sports clothes whereupon I had a wonderful time ignoring the price tags and just trying things on. I ended up with a green hoodie silkscreened with a subtle tree pattern, with lots of useful pockets and a heavy fleecy lining. Attractive and warm! Plus a gray fleecy vest with toggle buttons as a second layer for over top. And lastly, because I had also forgotten my sunhat, I got one of those packable/squishable wide-brimmed hats with a chin strap in brown. Now I was set! Even though it cost poor T nearly $200 for his boo-boo. <snicker!> It was a good thing too because we never did find another shop anywhere with such a perfect selection and I ended up wearing the hoodie at some time nearly every day.

After that we started heading south through Washington with a stop at the tourist town of Leavenworth: 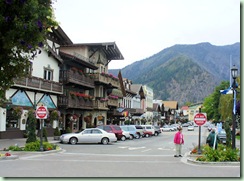 It’s the silliest bit of fake-Bavaria anywhere! Oompa music, gingerbreading, dirndl skirts, lederhosen and all. Even the Safeway sign is in blackletter. You can see why it was full of elderly tourists. We didn’t stay long and opted to buy apples at a fruit stand instead. We passed miles of apple and pear orchards in the area.

Another day later and we were heading through the rolling fields of cows and wind generators and over the Columbia River into Oregon. The central part of this state is famous for grass and there was definitely a lot of haying going on for miles and miles. Past Bend we visited a volcanic red cinder cone, driving around and around the coiled road up to the top: 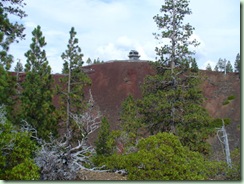 Here we’re on the trail around the crater looking directly across it at the fire station on the highest spot. Unfortunately we couldn’t climb up in the tower because the warden was working on active fire duty. Looking the other way we could see where the lava flows had spread leaving patches of forest untouched. This was the first of what was going to be the volcanic theme of the middle part of our vacation. We wanted to see the Lava River Cave too but unfortunately highway crews had blocked off the access to it.

So we decided to go off my original itinerary to camp in another part of the same volcanic area: Newberry crater. The caldera holds 2 lakes and a lot of other features such as cones and obsidian flows but most of it is covered in forest so it’s not very visible. The weather had also turned on us but I managed to get a photo of the volcanic cone next to Paulina Lake: 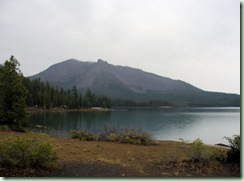 This was taken from our campsite right beside the lake which was really pretty…except for the crappy weather. Just after I got this picture it started to rain and blow gusts of wind. We ended up sitting in the van for a whole day unable to go anywhere without getting soaked. We unfortunately left our awning out which turned out to be a big mistake. In the early morning we were surprised by a truly strong gust of wind that picked up the awning, smacked it up and around and broke and bent all of the aluminum struts. It sounded like an explosion and we both shot up out of bed in a panic! Nothing like trying to assess the damage and take off the awning so it would stop flapping around in the wind and rain and pitch dark. We just dumped it on the ground and went back to bed, pondering what we were going to do with it and how we were going to manage the rest of our trip without it. Not only does it shade the side of the van and occasionally a picnic table if we can get close enough, but it allows us to open the window and the sliding door in the rain without getting the inside wet. It also allows us to take off our wet gear outside and gives us a place to hang things up to dry. It’s a very useful addition to our camping gear and we weren’t even sure if we could manage to get it together enough to bring it with us just in case it could be salvaged.

The next morning it was still raining so in full raingear we hauled the awning over to a picnic table under the pines to assess. We were pretty shocked at how much damage there was just from one blast of wind. It turned out that one piece of broken aluminum had flown over the van and embedded itself deep in the ground between our campsite and the next one, over 5 metres away! Another piece was picked out from between our bikes where we had them on their rack on the back. Luckily the bikes weren’t damaged. But the rain gutters on the van where the awning attaches were bent and scratched quite badly. Every single aluminum strut was wrecked – even T’s umbrella that was hanging underneath was bent. And we still haven’t looked to see if the vinyl was torn. It wasn’t easy but we were able to hammer (using the back of the hatchet) the bent pieces enough to tie the thing back together with rope and screw it back onto the van for the rest of the trip. Now we need to see if “Franken-Awning” can be repaired or if we need to buy a new one. Kind of a holiday expense we hadn’t foreseen. Things could have been worse though. The van’s canvas top or a window could have been pierced. Amazing wind power that was!

We finally got it together and packed up camp. It was still raining and windy but we were determined to go climb up one of the obsidian flows before we left Newberry. It was fascinating: 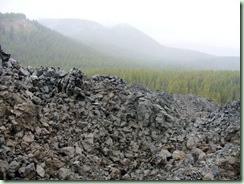 This photo just shows the edge with more craters behind. Obsidian is black volcanic glass and creates edges sharper than a surgeon’s scalpel. It was very useful to the Native Americans for cutting tools but you have to be very careful hiking up the trail. Dogs are not allowed because it cuts their feet. There’s also chunks of pumice, bubbly stone that floats in water, and ash in this pile of volcanic debris. I don’t know – does this show it any better? 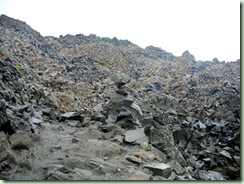 I had to capture the manmade rock pile on the trail. You have to admit there was no lack of raw material for it!

So this is getting pretty long. I’ll carry on with Part Two later. I’ve got lots of work to do today while it’s still nice and sunny outside. Rain is on the way again for the weekend (of course!) and I’m going to play with my Spectrum group tomorrow. I have to bring in my poor cactuses and haul a bunch of finished veggie plants out of the garden so I can plant fall rye in the bare beds. I’ve already picked the last of the tomatoes off the dying vines. There’s a few things left: scarlet runner beans, kale, tah tsai, and some greens. The dye garden probably has some colours left in it too, but that will have to wait until maybe next week. Lots to catch up on! More anon.